The New Canaan Newcomers Club’s Sail To Sable Fashion Show & Luncheon is to be held Oct. 6 at the Country Club of New Canaan. It benefits Stamford Health’s Campaign for Women & Babies. Details here.

The Board of Selectmen at its Sept. 20 meeting approved a legal bill from the town attorney’s firm of Berchem Moses PC that included a .2-hour charge for this item on Aug. 15: “Email from K. Corbet regarding housing committee; review of potential structure.” 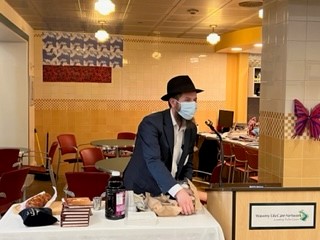 From Waveny LifeCare Network: “Waveny welcomed Rabbi Moshe Shemtov from Chabad of Stamford for Rosh Hashanah services with our residents and staff. The services included traditional Jewish prayers, songs and challah baked by Rabbi Shemtov’s wife. Wishing a happy and healthy new year to all!”

Connecticut had the second-biggest jump in the United States on U-Haul’s annual ranking of one-way moves between states, based on the company’s 2021 customer data, the CT Post reported.

The New Canaan Nature Center‘s Fall Fair will be held Friday and Sunday (not Saturday, due to expected rain).

Police received a report of a black bear that got into a garbage receptacle on Journeys End Road late Wednesday.

Police at 11:43 a.m. Tuesday responded to a report of a dead cat on Fable Farm Road.

Police on Monday received car keys found at Elm and Main Streets (at 1:32 p.m.) and Elm and Park Streets (at 5:30 p.m.). They were put into property management.

The legal bill approved last week by the Board of Selectmen also included three charges on Aug. 29 and 30 regarding “legality of an employee using a video recording device in his own locker re: fire department.”

Police responded to 46 psychiatric problems through the first eight months of 2022, compared to 27 in the same period last year, Police Chief Leon Krolikowski told members of the Police Commission at their Sept. 21 meeting.

New Canaan Library is featured in a Library Journal article titled “Living Our Values Out Loud.” It references a growing movement to boycott materials created with forced labor and reads, in part: “The New Canaan Library, led by Executive Director Lisa Oldham, has prioritized contributing to that movement to eliminate forced labor in building materials supply chains.” (Separately, the town has spent $1,128 another in legal fees since July 1 on the New Canaan Preservation Alliance’s lawsuit objecting to the Planning & Zoning Commission’s approval of the library project last year, according to last week’s legal bill approved by the selectmen.)

The legal bill approved last week by the selectmen also included a .7-hour charge on Aug. 24 for “legal research regarding flag policies.” Neighboring Darien has been grappliing with a draft policy that would bar non-governmental flags from flying on town property—“In the public’s eye, the draft unjustly targeted the local LGBT community,” The Darien Times reported.

The Town Players of New Canaan’s new show, The Fantasticks, will run through Oct. 2, and The Rocky Horror Picture Show will run Oct. 28 and 20 (come in costume for prizes). Shows are at the Powerhouse Theatre in Waveny.

Police received a report of a motorist passing a stopped school bus at Lakeview and Millport Avenues at 4:50 p.m. on Sept. 22. 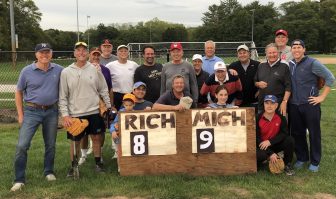 Finally, we received the following summary of the annual “Rich-Mich Softball Game” from Keith Richey”: “The 25th Annual Rich-Mich Softball Game was held at Waveny Park on Sunday, September 25th.  Playing for the Michno Marauders were: Rick DeNey, Jared Keifer, Rick Kilbride, Steve McCardell, Alan Sharpe, Luke Tashjian, Chas Timberlake, and captain Tim Michno.  Playing for the Recidivists were: Bill Acker, Brad Acker, Anthony Angilletta, Gary Antonello, Tom O’Dea, Joel Pelzner, Tom Windas, and captain Keith Richey.  John Fulkerson did a superb job pitching for both sides but his fielding favored the Marauders.  Cooper Toland acted as pinch-runner and John Tashjian assisted his father, Luke, fielding. This once-a-year multigenerational softball game has become a New Canaan tradition.  The teams are picked at random. The Recidivists broke out early, leading 1-0 at the end of the first, 3-1 at the end of the second inning. and still leading 4-3 at the end of the third inning.  The Marauders scored two runs to make it 5-4 at the end of the fourth inning – establishing a lead that they would never relinquish.  The Marauders increased their lead to 8-4 at the end of the fifth and then 9 to 6 at the end of the sixth inning.  There were many grounders and fly balls fielded by outfielders that resulted in force-outs at second base, an unusually high number probably due to slow running caused by the aging knees and old hip injuries of some participants which the youthful pinch runners helped to ameliorate but could not completely overcome. In the seventh and last inning, the Recidivists made an exciting comeback attempt scoring two runs to make it 9-8 with men on base.  The next hitter hit a hard grounder that Jared Keifer, playing shortstop, fielded cleanly and initiated the day’s only infield double play; throwing a bullet to Chas Timberlake on third base who fired off a shot to Rick Kilbride at second base to retire the Recidivists and end the game with the Marauders holding a one run victory margin. The big hitters were Brad Acker for the Recidivists and Jared Kiefer for the Marauders; each hitting towering home runs and doubles.  Both also played great defense at shortstop until Brad had a “hammy” and moved to the outfield.  The only other injury was to Tom O’Dea’s ring finger which got bashed but he won the affection, admiration, and votes of every Republican present by playing out the game and continuing to hit and field exceptionally well. A great time was had by all, and the postgame celebrations assuaged any letdown from the final tally. Looking forward to the next quarter century of Rich-Mich Softball!”