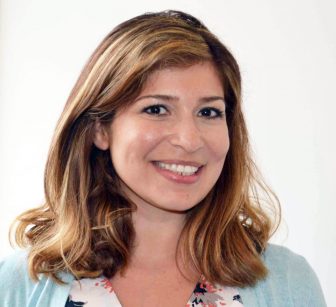 The menu at Saxe has changed “significantly” under Michelle Santelli, and the cafeteria now has a salad bar with “nice fresh options,” according to Dr. Jo-Ann Keating, director of finance and operations at New Canaan Public Schools.

“We moved our cook from the high school over to Saxe last year,” Keating told members of the Board of Education during their Sept. 3 meeting, held in the Wagner Room at New Canaan High School. “And she is phenomenal, she does a great job and she has brought a lot of that authentic cooking. She does all her own sauces. Vegetables, she incorporates them with some pasta. We are not all pasta anymore. There are protein sources. I think there has been a lot done at the middle school.”

The comments came during Keating’s report on unaudited financials from the last academic year, and in response to Board member Sheri West’s observation that there’s “a pretty wide perception that the quality of food service is much better at the high school versus Saxe.”

Keating said the discrepancy had been brought to her attention by several parents on her arrival in the school district.

“And I would say i have to agree with them—it was basically carbs, there wasn’t much nutrition there,” Keating said. “Having come from a district that had great programs at all schools, including the middle school, we started to introduce some concepts.”

Keating said the schools consulted with a dietician for $9,000 and that Santelli’s mantra calls for “exciting, colorful food that kids like.”

“Obviously for the first time, many of them have the freedom to choose their dietary choices, and some of them really don’t have the self-discipline to make the best choices, so I would just look at the food choices to make sure that is following the improvement in offerings,” West said.

Keating said the district is putting in production records that include tracking of what students are eating.

By way of introducing the financials of the lunch program at the schools, Keating said the district “had a remarkable year this year” with net profits of $356,585. (The figure doesn’t include a $500,000 insurance payout related to the lunch ladies’ scandal.)

Santelli was named director of food services for NCPS three years ago, succeeding Bruce Gluck in the role.