Saying they favored the adaptive reuse of a ca. 1907 home on Hoyt Street to its being torn down and replaced with new construction, zoning officials on Monday night approved a variance that will allow a local family to put an addition on the back of a house that sits on a narrow .22-acre lot. 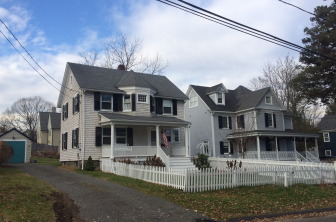 The Balzano family hasn’t yet moved into the four-bedroom Colonial at 52 Hoyt St. that they purchased in October. In order to make the home livable, Ronald Balzano told the Zoning Board of Appeals during its regular monthly meeting, a second floor must be layered above a 1987 addition off of the back. That requires a variance to the Zoning Regulations governing setbacks (in this case, from a side property line).

“Our hardship is that we are really in a dilemma for us as a family that we need the space that would sit above the 16-by-23 [foot addition] in order to make the home workable for us,” Balzano said during the meeting, held in the Sturgess Room at the New Canaan Nature Center.

Here’s a look at the southern side of the proposed second floor on an addition out back of the home at 52 Hoyt St. A single-story addition already is in place, following a 1987 expansion, and you can make out the existing roofline on the addition in its dotted lines in this rendering. Plans by Newtown-based Cartelli Designs LLC

“However, because of the setback rules that were put in place after the home was built, it makes it very difficult if not impossible to do much with that property,” he said. “Our one recourse is simply to build above the existing structure that’s in the back—it’s like a ranch style in the back of the home. And if we built a second floor above it, it makes the house livable. The alternative of course is to knock the home down—the house next door has been knocked down, and we all know what is going on in our town—so what we are trying to do is to make the house work for us.”

The board granted the variance 5-0, on condition that evergreen foundational plantings go along the north side of the home to soften what could become a large, near window-less wall facing a neighbor.

Concerned about a lack of windows in this wall—now we’re looking at the the northern side of the proposed second floor on an addition out the back of 52 Hoyt St.—ZBA officials on Dec. 1, 2014 included as a condition of a variance that evergreen plantings run along the property here. A single-story addition already is in place, following a 1987 expansion, and you can make out the existing roofline on the addition in its dotted lines in this rendering. Plans by Newtown-based Cartelli Designs LLC

Board member John Kriz said he worried that such a wall may “loom” conspicuously in the neighborhood, which includes several rather long and narrow lots on both sides of the road as you come off of Main.

ZBA members also expressed concerns about what is planned for a chimney that now serves a wood-burning fireplace in the single-story addition. If the owners plan to preserve that chimney with a second story, that will create new questions about the height of the chimney itself, which must clear the highest point on the roofline, the board said.

Balzano said that if needs be, he’d be happy to include a fake, gas fireplace rather than wood-burning, and assured the board that no second fireplace would be installed in the new floor on the addition (which likely will be a bedroom).

Ultimately, Kriz said that he was “encouraged” by the adaptive reuse of a 100-year-old house.

“The variance does not increase the footprint of the property, which is good, and it’s behind the front of the house, so the front is not changing, it’s less intrusive from the street,” he said.

In other business, after receiving praise for their civic-mindedness and expertise from Selectman Nick Williams during an organizational meeting, the ZBA unanimously re-elected both Carroll Yanicelli and Jeanne Rozel to their offices of chairman and secretary, respectively.