If a plan to purchase a building downtown to house both the New Canaan Police Department and Board of Education materializes, the town likely would look to sell NCPD headquarters on South Avenue for conversion into senior housing, First Selectman Kevin Moynihan said last week. 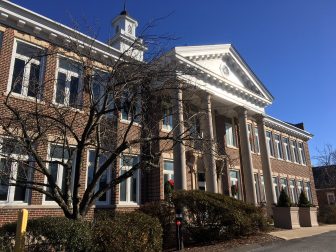 Opened in 1927 as the original New Canaan High School, the police headquarters could “become senior housing like the Schoolhouse Apartments, but not necessarily income-restricted,” Moynihan said Thursday during a briefing with local media, in response to a question from NewCanaanite.com.

“We have talked to people already, developers” regarding such a project, Moynihan said.

He added: “We want to monetize that building, not tear it down. Have it repurposed, probably for housing.” 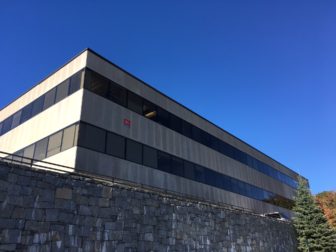 The Unimin building on Elm Street in New Canaan, as seen from the Lumberyard Lot. Credit: Michael Dinan

Moynihan has said the town is “very interested” in purchasing an office building at Elm and Grove Streets for NCPD and the Board of Ed. The “Unimin Building,” as it’s known, as 258 Elm St. would need about $2 million of retro-fitting work (mostly a second elevator) in order to accommodate those agencies, according to the first selectman. It isn’t clear how much New Canaan would pay for the Unimin Building, which was appraised last year at about $8.2 million.

It also isn’t clear how much the NCPD headquarters at 174 South Ave. would fetch for the town. The town for the current fiscal year had budgeted $500,000 to start the process of renovating NCPD with an eye on installing the Board of Ed on its upper floor, a plan Moynihan had endorsed in the past.

Yet the full renovation of police headquarters would cost another $7 million to $8 million, under an architect’s estimate that is part of New Canaan’s five-year capital plan, Moynihan said.

That makes the purchase of the Unimin building attractive, he said.

“The reason this transaction is desirable is that the net cost would be lower than just renovating the South Avenue building,” Moynihan said. “So not only do we get a better facility and we save $300,000 a year on rental payments that the BOE is spending.”

New Canaan must renovate the Police Department in any case, and such projects in recent years have cost towns such as Darien $17 million, he noted.

“Police departments apparently are very expensive,” he said. “So if we can do a transaction that houses both the Board of Ed and the Police Department, and is a net cost lower than renovating the South Avenue building, that would be a home run. I like home runs.”

In case New Canaan seeks to create what state officials define as “affordable housing” at NCPD, similar to the Schoolhouse Apartments to the north, it could be owned by the town and operated by a nonprofit organization, according to Moynihan.

Yet “ideally” the town would “not remain the owner of the building,” he said.

“But under the condition that the integrity of the structure” would be preserved, he added.

“We wouldn’t want it torn down,” Moynihan said. “We wouldn’t sell it to someone to tear it down.” 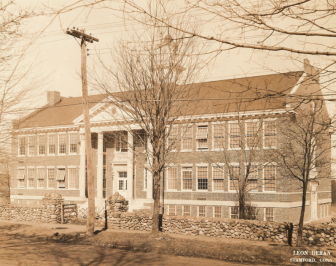 Prior to the opening of NCHS on South Avenue in 1927—the same year that Karl Chevrolet was founded (and sold 34 new and 38 used cars)—New Canaan students attended Stamford High School. Just four years after NCHS opened, the town opened its first middle school next door, in what is known as the Schoolhouse Apartments. At that time, New Canaan’s elementary school, Center School, also stood on South Avenue, just a few blocks closer to town. It’s now a parking lot that bears Center’s name.