[This is the second installment in a four-part series “Matriarchs of Main & Elm,” profiling the women behind New Canaan’s great business families.]

New Canaan’s Sara Schubert can remember walking through the woods as an 8-year-old girl to visit her grandmother, Rose Karl, at the Carter Street home that the family had built in 1926—the same year Rose’s own father, Henry Kelley, laid the cornerstone at the “new” New Canaan High School, now the police department. 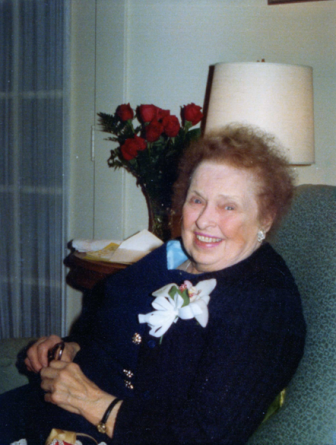 Rose Karl in 1977. Photo courtesy of the Karl family

There, the woman whose leadership, wisdom and commitment to loved ones would make an indelible mark on an iconic New Canaan business and family, greeted young Sara with freshly baked cookies, milk and—characteristically—meaningful conversation.

“I knew I wanted to be a school teacher, get married someday and have kids, and Grandma always told me that it should happen in that order,” Sara recalled on a recent afternoon. “She also told me to have a backup plan in case computers took over a teacher’s job, and this was back in the ‘70s. She was always so insightful, grounded and forward-thinking.” 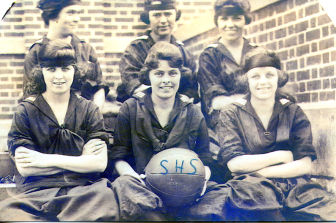 Rose Karl (center) was a star of the Stamford High School basketball team. Photo courtesy of the Karl family

One of 15 children born at the turn of the century to the prominent Kelley family of Carter Street, Rose would marry Leo Karl, Sr. at St. Aloysius Church on June 29, 1925—two years before he and brother Emil founded Karl Chevrolet. Charismatic, athletic, civic-minded, fun-loving and wise, Rose, following her husband’s untimely death at age 50, would independently raise and lead a generation of Karls in living by the high moral standards that she preached, becoming an integral thread in the community’s fabric.

According to Rose’s son, Leo Jr., she was the only girl in her family to ever marry. Perhaps the idea of seven brothers-in-law would fend off a suitor or two, but Leo Sr. was not daunted. The young Karls raised their five children in New Canaan: Mary, Henry, Leo Jr., Edward, and Paul. Leo Jr. is the one child still living among the five kids. 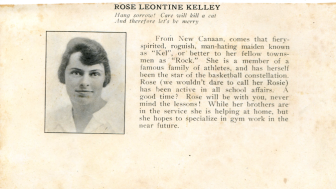 When she became a widow, Rose began to attend 7 a.m. Mass daily. Already a lifelong fixture at Sunday services, Rose lived by a definitive credo that her son expressed this way: “Faith came first, then family, and then the business.” 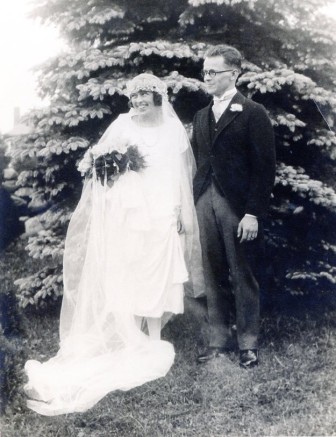 Rose and Leo Karl Sr. on their wedding day. Photo courtesy of the Karl family

“When she couldn’t drive anymore, I drove her to church each day, and that’s how I got into going to daily Mass,” Leo Jr. recalled. Even after his mother passed away on Jan. 31, 1983, Leo Jr. continued to attend—and does to this day – the very same Mass. “It’s a very peaceful thing to do.” His fondest memory of time spent with his mother was their daily lunches together. “I would go to the Carter Street house to visit with her every day during my lunch break. We would catch up and talk about the business.”

With an enormous family come large holiday celebrations, and Rose’s practical and selfless appreciation of family was evident as she embraced her growing number of relatives even into her later years. 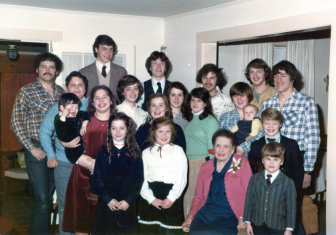 Tracey Karl, wife of Steve Karl (or rather, he’s her husband) and granddaughter-in-law of Rose, shared details of the Karl family Christmas and Easter tradition started by the matriarch, who valued “keeping everyone together but letting them have their own lives.”

“Since her children were starting their own families, Rose thought it was important for everyone to have Christmas and Easter dinner in their own homes, and then she would host a party at her house after dinnertime so all of the Karls could still be together at the holidays,” Tracey told NewCanaanite.com. 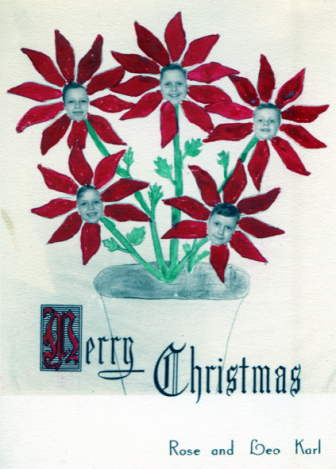 After Rose passed, her daughter Mary continued the tradition of hosting the after-party, the honor and duty of which now alternates between the nieces.

“She would have tea sandwiches, cookies, candy, punch—there was always a punch. She wanted her kids to have their own holidays, too,” Tracey recalled.

Leo Jr. said his mother possessed a rare, innate tendency to think of and care for others, whether it was a relative or neighbor. 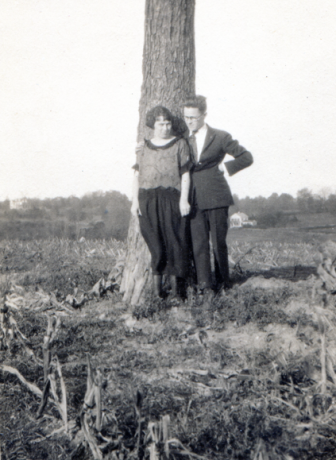 “She was such a giver of herself,” he said. “When someone was sick, she was there with soup. When someone died, she put food on their family’s table. She was there, always there, and especially committed to her kids.”

Like all other families at the time, Rose also felt the effects of World War II at home. Because there was very little gasoline available at the time, Rose would entertain her five children on the front porch or in the storied backyard on Carter Street, where the family held many softball and football games throughout the decades.

Motherhood soon grew into grandmotherhood, and Sara recalle the same games of “Mother, May I?” being played along the sentimental front step. Both Leo and Sara admired how Rose would lead her children and grandchildren in games for hours, always happy to have the children outside, engaged, and living in the now. 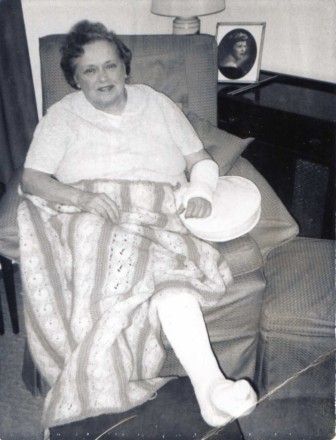 Rose Karl broke her arm and leg—family legend has it she suffered the injuries playing basketball with relatives. Photo courtesy of the Karl family

One of the many sports enjoyed by the Karl family is basketball, and perhaps the Kelley gene is responsible for the tenacity on the court.

“Not many other grandmothers would still play basketball with their grandsons well into their 70s,” he said. It is family legend that Rose’s broken arm and leg resulted from a basketball game or two with the grandkids.

Never daunted by a challenge, Rose was described as “fiery-spirited and roguish” as well as “the star of the basketball constellation” in her Stamford High School yearbook (Stamford being the high school available to New Canaanites at the time). 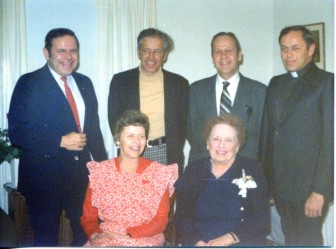 Rose Karl sitting at right with her five kids in 1977. Photo courtesy of the Karl family

Her resolve and determination off the court are equally impressive. In her younger days, prior to the existence of a New Canaan High School, Rose would walk from home on Carter Street to the New Canaan train station to attend school in Stamford.

All the while Rose remained a steady and admirable role model who “instilled the work ethic, family values, and the family tradition of giving back to one’s community,” according Steve Karl. She was very active in the Catholic Daughters group at St. A’s, and was proud of all of her children and her son Edward’s decision to become a Catholic priest. 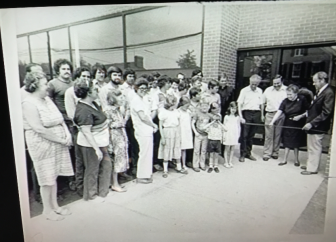 Rose Karl cuts the ribbon at the grand opening of the new Karl Chevrolet showroom. Photo courtesy of the Karl Family

Were she to see the community giving plaque outlining Karl Chevrolet’s commitment to town events and organizations, she would be beaming with pride today, her descendants said. The Karl family, including Leo Jr., Rose’s 18 grandchildren and 33 great-granchildren, continue to embody the value of caring for one’s community by sponsoring various sports teams and supporting non-profit organizations.

Despite all that is known about Rose and her impact on her family—and by extension, our town—there remains some mystery about her. Just how Rose Kelley and Leo Karl, Sr. met in the first place is unknown among Karl family members, though there are a few possibilities. Each known independently for a gregarious personality, Rose and Leo Sr. worked in different places on Elm Street—she in an office and he with cars, so they could have met during a lunch break stroll. 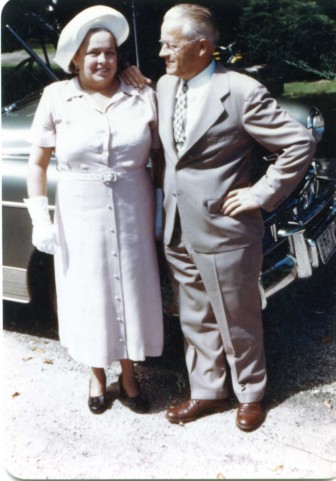 Or, since Rose attended St. Aloysius Church and Leo lived next door with his siblings and parents at The Melba Inn (after moving from Milford to New Canaan), the couple may have shared a pew at St. A’s. Regardless of the details of their courtship, when they married 90 years ago, they could have only imagined how their marriage would become a cornerstone in New Canaan’s history and Karl Chevrolet, founded in 1927, would touch so many other families in town.

As if role model, confidant, star athlete and matriarch weren’t enough, Rose was known as an amazing cook and especially noteworthy as a baker.

Following in her grandmother’s footsteps, Sara Schubert shares the gift of baking with friends and family throughout the year, and grandson Leo Karl Jr. declared that his favorite item baked by his mother was most definitely “her homemade bread. 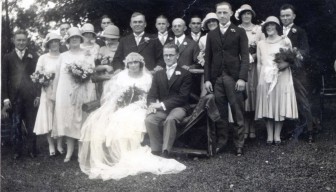 Rose and Leo Karl Sr. on their wedding day in 1925, two year before Leo founded Karl Chevrolet with his brother Emil. Standing behind Rose is Henry Kelley, her father. Photo courtesy of the Karl family

“It was so much better than bought bread,” he said. “We kids fought over it—three loaves of plain white and one of raisin. Most of the other kids didn’t like raisin, so we’d have white bread until it was all gone and then I’d still have the raisin.”

Last spring, when Rose’s daughter Mary passed away, it was decided that the house on Carter Street would be sold—no doubt to a family who is sure to hear the echoes of children’s laughter, the dribble of a basketball, and the aroma of freshly baked cookies emanating from the front porch—parts of the life and legacy of Rose Kelley Karl.

4 thoughts on “Faith, Family and Fierce on the Court: Rose Kelley Karl”