The town-owned Vine Cottage soon will be marketed for sale on condition that the ca. 1860-built structure be added to New Canaan’s Historic District, the municipality’s top elected official said Thursday. 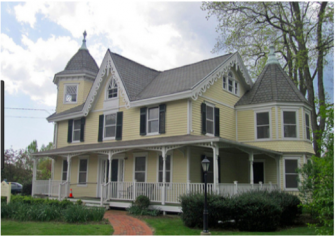 Town officials recently drafted an updated five-year capital plan that “has some inherent decisions about buildings in it,” First Selectman Kevin Moynihan told the local media corps during a press briefing at Town Hall.

“We are not going to fund any renovations of Vine Cottage,” Moynihan said. “It assumes that Vine Cottage is not in our portfolio.”

The gabled structure’s current occupant, the Human Services Department, would be moved about 50 yards away to the lower floor of the former Outback Teen Center, under Moynihan’s plan, he said. (The Outback has been vacant since the teen center stopped operating three years ago and the building reverted to town ownership. Even empty, it costs New Canaan about $50,000 in maintenance costs, officials have said.)

Moynihan said the idea is to sell Vine Cottage “rather than putting a half-million dollars into renovating that building for six employees,” a reference to the Human Services Department.

The sale of the Outback building would require approval from the selectmen as well as the Board of Finance and Town Council. The town funding bodies’ liaisons on the capital plan support the move, Moynihan said.

The town’s capital plan “assumes the near-term marketing of that building,” he said.

If the sale materializes, it would represent the first major off-loading of a public building since the publication in December of a report detailing the capital needs, uses and possible futures of 56 town-owned buildings in New Canaan. In its report, the Town Building Evaluation & Use Committee recommended holding off on an estimated $550,000 renovation of Vine Cottage until it was more clear just how it would be used. That future use—or more accurately, lack of a future use—has come into focus in recent months as Moynihan has voiced a preference for moving both the New Canaan Police Department and Board of Education into an office building downtown.

Whoever buys Vine Cottage will need to agree that its street-facing appearance remains unchanged.

“We want to make it clear that the aesthetics of that building remain as they are,” he said.

As it is, New Canaan’s Historic District—roughly, the area around God’s Acre—stops one property short of Vine Cottage, with the former Red Cross building. Arnold Karp, a local builder who bought the Red Cross building last year, has said that what he does with it will depend largely on what the town decides to do with Vine Cottage.