If Mike Evans had an epiphany—if there’s a single moment that gave rise to the nonprofit organization he founded in 2006—it likely arrived moments after he met the Dalai Lama as a semi-pro basketball player in Northern Ireland. 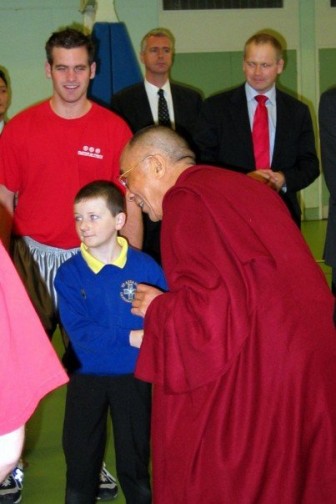 Working at a hoops clinic that had brought together very young children from different backgrounds there, Evans shook hands with the Buddhist leader during the latter’s world peace tour in Belfast, and moments later, two girls—one Protestant, the other Catholic—got into a fight.

“They whisked the girls away,” Evans recalled on a recent morning. “The reconciliation was not happening at home or in the classroom for these kids. You get the toughest kids, and at 15 years old they’re on the brink of being a productive citizen or joining the IRA [Irish Republican Army] or UDA [Ulster Defence Association].” 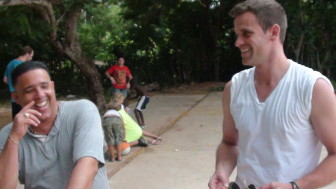 Following the incident, Evans—a 2001 Weston High School graduate and all-state basketball player who would go on to earn a bachelor’s degree in writing at Hamilton College (where he set several scoring records) and master’s in education from Harvard—reflected on something that had happened to him as a child growing up in Fairfield County.

“I’d had a very meaningful experience as a basketball player in Weston where I grew up, where my dad brought me to Bridgeport to play once a week as a third-grader,” recalled Evans, 32, of Norwalk. “And it opened my eyes a lot. It’s a cliché—people talk about how you can have their eyes opened up. I became friends with kids from a background totally different from mine and genuinely cared for them and still do, and as I got older I realized how different our worlds were.” 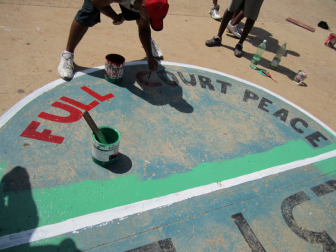 The notion of forging a mutual understanding between people from very different worlds, through basketball, took hold for Evans. He would soon found Full Court Peace, a program unique in that it is both born of bold, philosophical principles and capable of delivering concrete, visible results.

Drawing from his deeply personal experience as a boy here in Connecticut, Evans founded the organization in Northern Island and in the decade since has taken basketball and his mission to drug zones in Mexico and severely impoverished areas in Cuba.

Today, Full Court Peace is taking hold locally, bringing hundreds of basketball players from diverse socioeconomic backgrounds together on trips abroad while connecting boys from those groups together here in New Canaan. 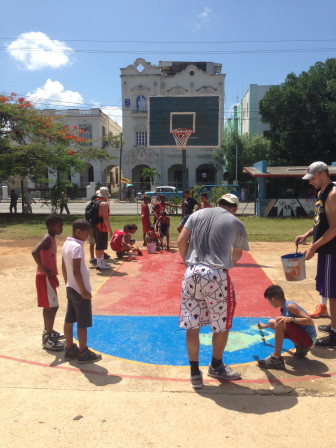 “We live such different lives—the achievement gap is at its highest in Fairfield County, and the economic gap and income gap are at their highest—and I think that both communities should have a sense of what the other lives like,” Evans said. “I think we all live in the same world and know how to live together and relate to each other, and unless we do, we will grow further and further apart. We already have income-wise. To be near and around each other, we need to be able to understand one another.”

All told, there are about 500 Fairfield County kids involved in Full Court Peace through winter, spring and summer camps and leagues—with a fall program planned—including 70 boys who join Evans and other former NCAA players each year on trips to Cuba to build basketball courts, hand out equipment, play the game and otherwise immerse themselves in the organization’s work. Evans, the executive director of Norwalk-based Full Court Peace (he’s never drawn a wage from it—see financials here), said the organization will make seven trips to Cuba this year. 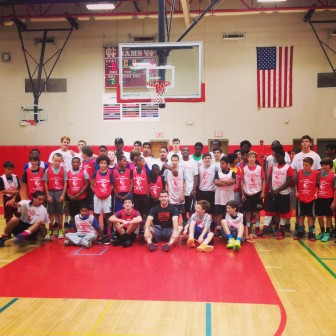 Advocates for Full Court Peace—parents with kids who have participated in Evans’ programs at the YMCA or schools—say it offers camaraderie, creates cross-town bonds not found elsewhere and introduces new basketball skills and styles of play.

“My game improved. I’m playing smarter on the court, not making the same passes I usually make, sort of playing one step ahead of the game,” said Stephen Wronski, 14, a Saxe Middle School eighth-grader who has participated in Camp United.

Stephen, who plays Amateur Athletic Union basketball and intends to play ball at the high school starting next academic year, added that he’s become friends with many of the Bridgeport boys in the program.

His classmate and friend Ben Sarda, also 14, said he’s enjoyed the exposure to a more diverse group through the camp.

“It was cool how we all came together to make one camp, whereas other camps would be just a lot of people from one town,” he said. “It was cooler to have a wide variety.”

Like Stephen, Ben said he’s improved his game in specific ways by playing a faster-paced basketball than is typical in New Canaan.

“We got better by playing with each other, the competition was really good and we pushed ourselves to reach our potential,” Ben said.

Full Court Peace Camp has had major supporters in New Canaan, including NCHS Athletic Director Jay Egan. With Egan’s support, the camp has been placed in the All Sports Booster Club’s popular summer series, and some costs typically associated with those camps were deferred in this case.

“Basically all we have done is make it as easy as we possibly could for these activities to take place, and then there have been some young men that Mike knows from these inner-city situations that we have also employed at some of our camps,” Egan said. “I just trust that Mike brings these opportunities to New Canaan and these kids in New Canaan for this authentic diversity, and we are kind of just taking advantage of these opportunities. I know it is benefitting both groups of kids in these programs.”

And it’s inspiring others.

New Canaan’s Sheri West, a Board of Education member, is planning this summer to launch LiveGirl, a new nonprofit organization that is drawing from her family’s experiences with Full Court Peace Camp, which her son Conor attended. LiveGirl (that’s a short ‘i’—her daughter Olivia ‘Liv’ West helped conceive it) will see 20 girls from Bridgeport and 20 from New Canaan brought to New Canaan High School for a sports and leadership camp in July, West said. It will be run indoors and outdoors, its leadership curriculum led by New Canaan CARES and including role models such as senior executive women who will share their own experiences.

West said that when she connected with Bridgeport’s Wakeman Boys & Girls Club to get her program off the ground, she found that Full Court Peace had already paved the way.

“Really, one of the reasons this [LiveGirl] moved quickly is because of [Full Court Peace Camp] and what Mike has done,” said West, who also credited Egan for his immediate willingness to help her in any way he could. “When I went to Wakeman and sat down with the youth director, I got two words in and he said, ‘I got it,’ because he’d seen what [Full Court Peace Camp] did for the boys. He told me that if I had a similar opportunity for girls, he was all in.”

Full Court Peace Camp was a big deal for the first group of parents who included their boys in the program, West said (“It was like going to Alaska for those kids, to get on a bus and go to New Canaan, an unknown world”) and those who participated in it enjoyed it so much that they wear their camp jerseys back home around the center like a badge of honor.

West called the experience of playing basketball with a more diverse team “invaluable” for Conor, not least because he learned to “shoulder back” in a more physical, often more aggressive style of play.

The West family, who also host in the summers through Fresh Air Fund, is planning to join Evans on a trip to Cuba during April break, she said.

For Stephen’s mom, Ann Wronski, there’s no other program that offers what Full Court Peace does through its camp.

“I don’t think there are really opportunities to meet kids from Stamford or Norwalk or Bridgeport or the surrounding towns for our kids, aside from Full Court Peace. My son plays AAU basketball, so he plays off and on with kids from surrounding towns, but on a daily basis there really isn’t an opportunity,” Wronski said. “You are pretty much friends with the kids you to go to school with, so this creates opportunities for kids to meet children their same age that they would not normally meet, and they develop friendships.”

Wronski added that she fully believes in Evans’ philosophy of marrying sports and service, and sees her family participating in a future trip to Cuba to build basketball courts.

Wronski said she would like to see her two younger sons, ages 11 and 9, get involved in Full Court Peace when they’re older, and called Evans “a good leader.”

“He has created something unique, and when it comes down to it, it’s very simple: Kids are playing basketball together and eating lunch together. That’s really what it is. You have to create that opportunity. And that’s what he’s doing. Mike is creating that opportunity.”