Over the past few years, the saying, “Saturdays Are For The Boys” has grated on my every nerve. Is Saturday for the boys? Only the boys? Really? Not in my house. I don’t mean this in an I-am-woman-hear-me-roar sort of way. I am simply, and officially, coming out as a football fanatic. Always have been. Always will be. I love the sport, mild concussions and all.

In the glorious ‘80s, the South-of-the-Y neighborhood boys would meet on designated front yards and play semi-organized tackle football, known as the KFL: Kids Football League. My brother, Bill Pescatello, along with Tade Reen, Mikey Stuart, and other neighborhood-lums, divided up into teams and competed against one another day and night. 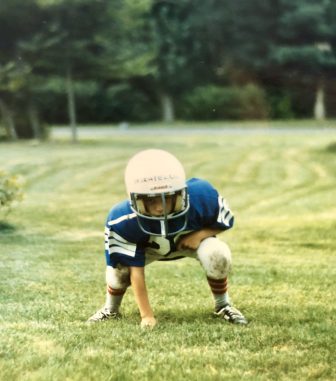 The KFL flourished for years. Some would say it was the training ground for New Canaan’s best-ish youth football players in the ‘80s. Certain homes were slated as “stadiums” for the big games. My father even installed (at the time) state-of-the-art outdoor floodlights in our front yard to keep the players’ union happy. Recalling one particularly frigid and hard-fought winter game, my brother remembers halftime when the home team sought refuge inside a cozy basement while the “away” players were locked out on the frozen tundra.

Our location was so prime for football that the booming voices of the high school varsity field’s announcers echoed into our homes on Saturdays. The energy and excitement of the games cut through the air as cheers erupted like thunder rolling down Putnam Road. As the KFL players matured and moved up through Pop Warner and the travel football program, they all shared one dream: to become a Ram and play for Lou Marinelli at New Canaan High School.

My brother and many of the KFL players went on to play for Lou, and unlike many things in life, the experience lived up to expectations. To this day, my brother says that Lou Marinelli has a way of bringing out the best in his players, seeing past young athletes’ self-doubts and insecurities to find and wrangle out suppressed talent. He also brings team parents into the fold without bending to their influence.

After hearing decades’ worth of stories about Coach Marinelli, I want to add one more for the books, one of which not many people are aware. 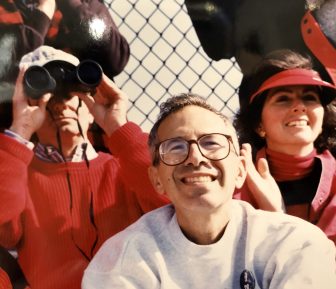 In the fall of 1995, my brother and I were settling in at our respective colleges when our 53-year-old father was shockingly diagnosed with terminal brain cancer, glioblastoma multiforme. It was a death sentence and we all knew it. The news traveled quickly throughout town. No one could believe that New Canaan’s very own marathon runner, and the epitome of health, Edward Pescatello, could be fighting for his life.

During that difficult time, my mother and father were so laser-focused on doctors’ appointments, chemotherapy and radiation that our yard had become blanketed with fallen leaves. Under normal circumstances, my father, who thrived toiling in outdoor work, would have raked the leaves with abandon. Instead, one afternoon during the busiest part of Marinelli’s season, he and the entire NCHS varsity football team appeared unannounced at our home. Equipped with rakes and cheerful enthusiasm, the army of young athletes cleared the yard of debris. Lou and the boys’ showing of support and generosity of spirit still makes my heart swell after 22 years. 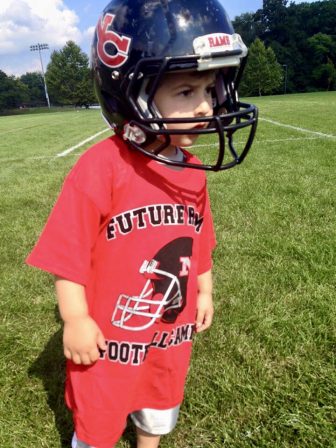 The next generation of Pescatello football player, Bill’s son, Edward, watching a NCHS practice in 2015.

My father passed away months later, after a noble fight. During his wake, every NCHS varsity football player showed up in a suit and tie and entered the funeral home, one-by-one, to pay their respects. Of course, Lou was there leading this quiet charge. With the dignity and poise of grown men, each athlete solemnly strolled up to my family, looked us in the eyes, shook our hands and said a few words of comfort.

I know there are a lot of Xs and Os in football, but under the right leadership, there is so much more to the game—especially when coaches actively develop and help shape athletes into responsible young adults. This, to me, is as American as apple pie and as “New Canaan” as it gets.

While my kids have yet to resurrect the KFL in our neighborhood, I know that my brother, with his three spirited youngs boys, are already laying the groundwork for a Chicago offshoot of the program. It will surely be based on many of the fundamentals he learned in New Canaan and under the tutelage of his childhood hero, Lou Marinelli. I hope they will save a jersey for me, and perhaps, let me into the basement during halftime.

28 thoughts on “Full Disclosure: Saturdays Are for the Rams”