Manfredi, a jeweler that for 27 years has been a fixture of Greenwich Avenue, is planning to open up within two weeks on Elm Street in New Canaan. 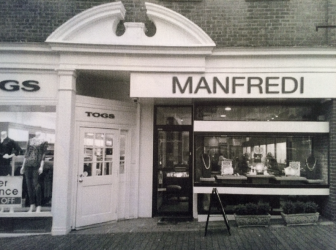 For 14 years the home of Henry C. Reid & Son, 72 Elm St. will undergo a major renovation in order to create a Rolex boutique inside, with changes in furniture, carpeting and other areas, said Manfredi owner Roberto Chiappelloni.

Asked why New Canaan was a good location for his store, Chiappelloni said he’s always liked the town, had a daughter in the venerable Mounted Troop here for 10 years and at one point had planned to move here. 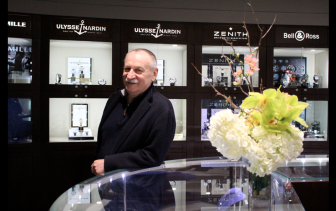 “I always loved the feel and quaintness of the town and the way it’s laid out, so I thought it would be a great fit to open a second location,” Chiappelloni told NewCanaanite.com.

Henry C. Reid two months ago began promoting a “liquidation sale” with signs in the window and a sandwich board outside the store—as well as a billboard that became a sort of curiosity in town, upright and mounted on a motor vehicle that traveled about New Canaan. A note in the shop’s window Wednesday instructed customers seeking information on jewelry repairs to follow up with the company’s Fairfield store. 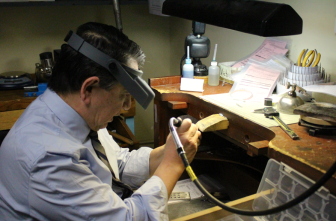 Goldsmith Victor Mendieta. He is originally from Ecuador. He has 50 years experience. He went to school in Ecuador for jewelry making. He is a “master jeweler,” and has been at Manfredi for 7 years. He makes jewelry from scratch and does repairs. This is him at his work station with a range of tools from worn wood forms to computerized measuring equipment. Credit: Leslie Yager

Meanwhile, Manfredi becomes the second jeweler in as many weeks to announce its arrival on that stretch of Elm Street between South Avenue and Park. Brad & Vandy Reh Fine Jewelry is slated to open in the former Red Mango space in early- to mid-March. (Both businesses will go before the Planning & Zoning Commission Thursday for approval on store signs.)

Chiappelloni said that Manfredi has a strong following already from New Canaan, and hopes to duplicate its Greenwich business here. 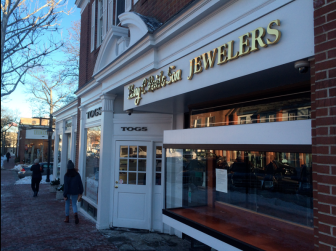 The space at 72 Elm St. has been occupied for 14 years by Henry C. Reid & Son Jewelers, now consolidated in Fairfield. Credit: Michael Dinan

Helping with the transition will be Kim La Du, a Reid employee for 10 years who will serve as manager and partner in the Elm Street store, he said.

“What we say is that nothing is too big or too small,” Chiappelloni said.

“ ‘Luxury’ is often a word that’s thrown around, but it only begins when you have a problem and the kind of service you are given after that, and we pride ourselves on amazing customer service,” he said.

According to Manfredi’s website, the company’s offerings include “exquisite, handcrafted creations in 18K gold, platinum and diamonds with a wide variety of gemstones” and brands such as “Franck Muller, Parmigiani, Richard Mille, Greubel Forsey, Urwerk, and Glashutte Original.”