Citing a poor history with her neighbor and concerns about light and noise, a Sturbridge Hill Road woman on Wednesday filed a formal objection with town officials to a plan to build an 8-bay garage where a tennis court now sits. 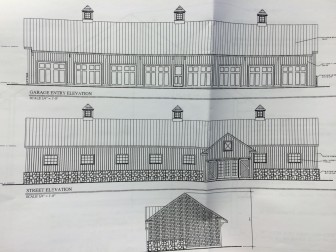 The proposed 8-bay garage for the owners of 43 Lone Tree Farm Road.

Laura Kane in a Jan. 28 letter to the town planner said that her neighbors at 43 Lone Tree Farm Road—in building a single-story, 2,600-square-foot detached garage—would be “overbuilding their property in an area where they are surrounded by neighbors and their property does not provide either the acreage or seclusion for the compound they are attempting to construct.”

“I must state that the bright lights from the ‘sportsbarn’ they constructed several years ago and the noise when it is in use has been quite annoying at times and I do have some concern about additional structures,” Kane said in her objection letter, on file at the Planning & Zoning Department. “The lights reflect off the pond and into my windows. All precautions should be taken to plant trees and shrubbery to prevent additional inconvenience.”

A public hearing before the Planning & Zoning Commission is scheduled for 7 p.m. Thursday. 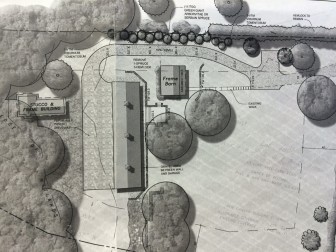 Site plan for the owners of 43 Lone Tree Farm Road.

The applicants, Paul and Ann-Marie Queally, own three contiguous properties—running north-south, numbers 43, 57 and 67 Lone Tree Farm Road. They’re seeking a special permit to put up the garage, 20 feet high, on the existing tennis court envelope, located 202 feet from the street, according to their application.

“While the applicant owns three contiguous properties in reality the applicant has combined the sites and their uses are consistent with a large well thought out estate then as three separate lots,” their letter said. “The replacement of the tennis court with the proposed garage is in character with the overall estate look and feel.”

At 2,600 square feet, the garage will come in well below the allowable coverage of 5,259 square feet, the Queallys said. It will be set back from the street and neighbors, made with “stone foundations, wood siding, and gable roofs consistent more as a barn” and will be “well screened and accessed by the extension of the current driveway,” the applicants say.

It will house a car collection, the Queallys said.

In his memo to the P&Z Commission, Town Planner Steve Kleppin noted that the proposed garage would go up in a wetlands-regulated area “and requires an administrative wetlands permit.”

P&Z officials said Wednesday that a wetlands application has been filed.

“Please note that the proposed structure is more than 150 feet from the street and the resulting impervious surface coverage will be less with the removal of the tennis court,” the town planner’s memo said.

Kane in filing her objection raised the specter of a stone wall that she said is located, in part, on her own property. It isn’t clear how the stone wall relates to the proposed garage.

“I informed [the Queallys] five years ago in the appropriate manner of this encroachment and they never contacted me to rectify the issue,” she said. “Last week I again contacted Mr. Queally and his attorney, Mr. Rucci, to request them to address the issue of the stone wall constructed on my property. I have received no response.”

Kane is calling for the reconstruction of the stone wall or “a land swap where I am compensated for their encroachment.”

She recommends “adequate planting of shrubbery or trees as a buffer and the moving of the portion of the stone wall constructed on my property.”

Here’s the area we’re talking about: