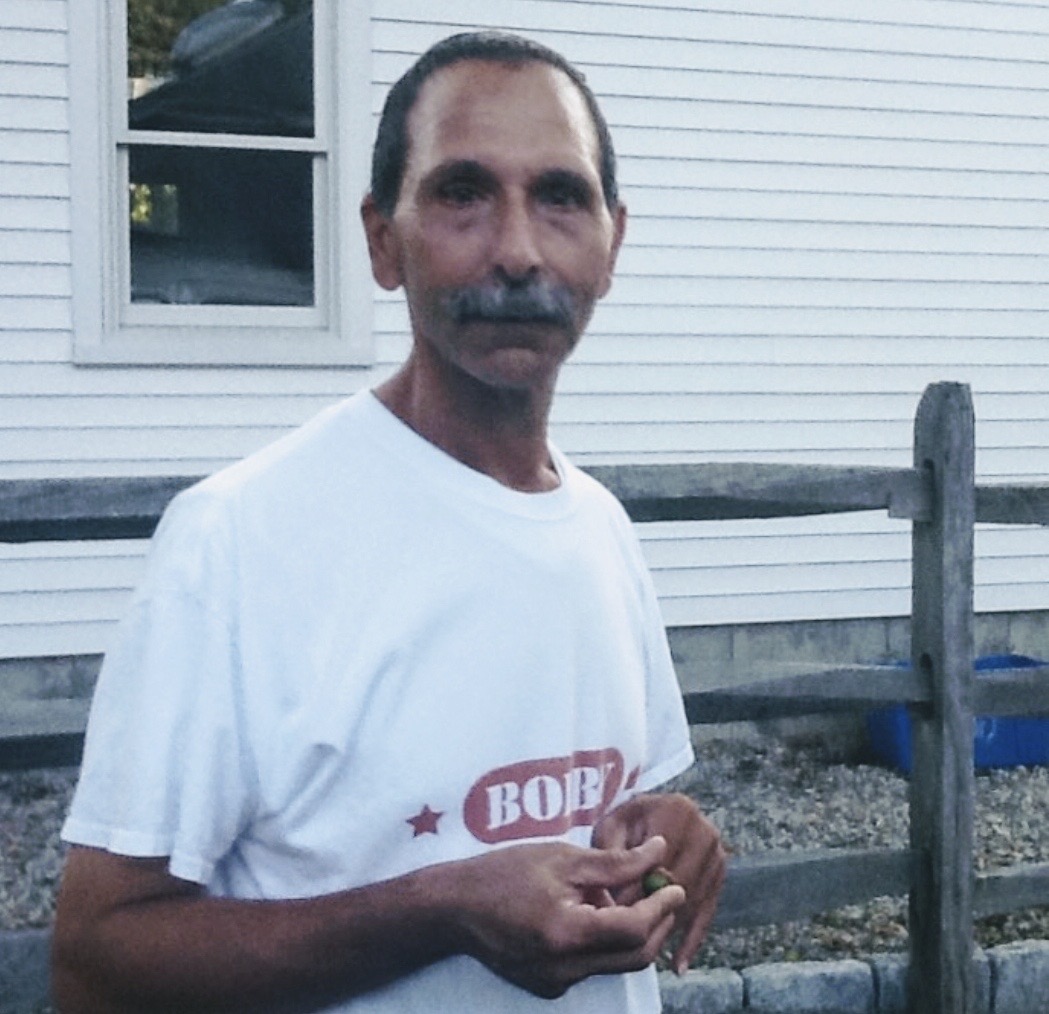 Bobby Peloso became part of Marianne Perry’s life when she moved to New Canaan in 1979, though it would be many years before she met him.

Driving along Route 123, Perry would see Peloso standing each day on a grass verge off the east side of the state road, between Urban and Hill Streets, waving to passersby from the edge of a large garden.

“I remember always seeing this person,” Perry, for the past 14 years an Urban Street neighbor and friend of Peloso’s, told NewCanaanite.com. 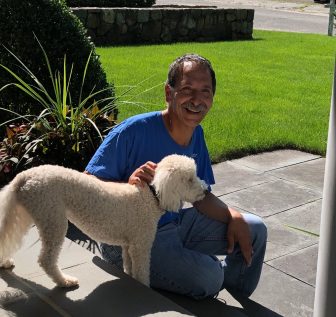 “He is just a delight. We still see him most every day. He is part of our lives. He is the best neighbor you could ever have.”

She added with a laugh, “He knows everything about everyone—which is good and bad, I guess. He’s a person that many of our elderly people in town who knew him and his aunt and uncle and grandfather, they still call him and gossip. So he’s quite a fixture.”

On Thursday, Peloso—one of New Canaan’s most visible and widely liked residents, known to countless local kids after more than 30 years helping out with the buses, recess and cafeterias at South School and Saxe Middle School—turns 60.

Originally conceived as a block party, a surprise parade-style celebration of Peloso’s birthday and singular place in the community is to be held Thursday evening. Organized by neighbors who describe their friend as a smart, gifted and loving man with a powerful memory, the drive-by event will see celebrants stage at East School at 5 p.m. (observing social distancing) and travel past Peloso’s home on what is forecasted to be a clear and sunny evening.

It’s an appropriate event for a man known to New Canaanites as a sort of unofficial “town greeter” for motorists zooming by on 123.

The eighth of nine children, he was born with special needs and grew up living between his Pound Ridge, N.Y. immediate family and aunt, uncle and grandparents on Urban Street in New Canaan, which would become his permanent home, according to sister Barbara Peloso. He attended a special education program at Royle School in Darien, finishing there at age 21 and soon settling into his position with New Canaan Public Schools, she said.

Asked what the birthday celebration means to her, Barbara Peloso said, “I could start crying.”

“It’s very emotional for me,” she said. “This is just a great tribute to him and what New Canaan is all about. They have all kinds of programs for seniors and he is fortunate he works at the school. They take care of him. I think it’s just great they are doing this. It is a whole other family. He has a network that is in place.”

Important parts of that network include neighbors such as New Canaan firefighter Dave DiPanni and longtime South School co-worker Judy Gilroy and her husband, Tom.

DiPanni, a 1985 New Canaan High School graduate, said Peloso has been a designated associate member of the Fire Department who regularly greets him around the neighborhood with a “See you round the campus” or “10-4, good buddy.”

“Bobby is just so positive with everything,” DiPanni said. “He has such a bubbly and terrific personalty and he just puts a smile on your face every time you talk to him.”

Peloso also has what DiPanni described as “an impeccable memory.”

“Whenever I come off duty from the Fire Department, he will come across the street and inform me and say, ‘Guess whose birthday it is today?’ And he will remind me of things. It’s unreal. He even knows the details about all the trucks.”

DiPanni added, “One time he busted me at work. I was at the Fire Department with 15 minutes left on my shift and he came up to the firehouse and wished me a happy anniversary, such-and-such years and time. The guys were really busting my chops. ‘You worked on your wedding anniversary?’ ”

The DiPannis have Peloso over for holidays so that he’s not alone and, with the Gilroys and others, ensure that his home and property are maintained, that there’s food in the house and that he has rides when needed (Peloso himself doesn’t drive).

Barbara Peloso said the Gilroys have taken over twice in recent years for long stretches as Bobby’s primary caregiver when she’s been set back by her own medical issues.

Asked about Peloso, Judy Gilroy said that when she and her husband go away on vacation, they call him every day, “just to check on him and ask him the weather.”

“So he expects our call when we are gone,” she said.

She added, “He has been like a brother to us.”

“Bobby is a familiar hometown icon. Everyone knows him. Everyone watches for him to wave to him. In the schools, they know going to work that he will do the buses, he will do lunch, he will do playground duty. And also to the young people in the schools, everybody knows Bobby. You grow up knowing Bobby. And he never changed and then you moved on but you would see him when you travel down the road. He’s just a New Canaan icon.”

Paul Gallo, a 1980 New Canaan High School graduate and lifelong Urban Street resident known to many as the wrestling coach at NCHS, said he has known Peloso since childhood.

Though young Bobby didn’t venture out and play with other kids, the neighborhood children would gather in the Pelosos’ yard to play whiffle ball.

“He could hit the ball a ton,” Gallo recalled.

“We used to try to hit the tennis ball over his house and sometimes it sort of hit the house. We got yelled at a few times, but he could put it over. I never could. I was too small. But he was strong and he had good hand-eye coordination. We use to go to Mead Park for tennis balls and go to his backyard and he used to whomp that ball over the house.”

Gallo described Peloso as a man with a big heart who likes to be social.

“He goes and stands by the road and he enjoys just seeing and talking to people,” Gallo said. “He has been out standing by the road since he was young. He just likes the stimulation. He knows everything—my birthday, my mom, my brother—he remembers all that stuff.”

Asked what she believes her brother is thinking about as he oversees New Norwalk Road, Barbara Peloso said, “He kind of does a little inventory in his head. In his mind, the numbers—don’t ask me how that works, that part of his brain. He will tell you how many red cars went by. Connecticut plates. Like an inventory, taking attendance, checking everyone out. He is like the supervisor of 123.”

She added with a laugh, “He knows how to get out of doing things. When you give him a task, he either will not do it or screw it up so you don’t ask him again. He is my brother and I love him—and I want to kill him. Whenever you take him some place, he’s like the pied piper. He knows everybody. Go to Wal-Mart or Walgreens. ‘Come on, Bob, we gotta go.’ He’s very social.”

Perry said Peloso has forged a unique place in the South and Saxe communities.

Jen and Scott Chard, fifth-grade special education and eighth-grade science teachers at Saxe, respectively, said in an email that Peloso is “a treasured member of our Saxe community.”

“He is a living testimony to the good things that New Canaan represents,” they said. “His presence is always known and his wonderful personality is a breath of fresh air. He embodies all of our school values and is committed to both the staff and the students. Everyone in our Saxe family loves him.”

Barbara Peloso said the birthday plans and support for her brother reflect a fellow-feeling that defines the town.

“I just want to thank everyone in New Canaan that treats him with respect,” she said.