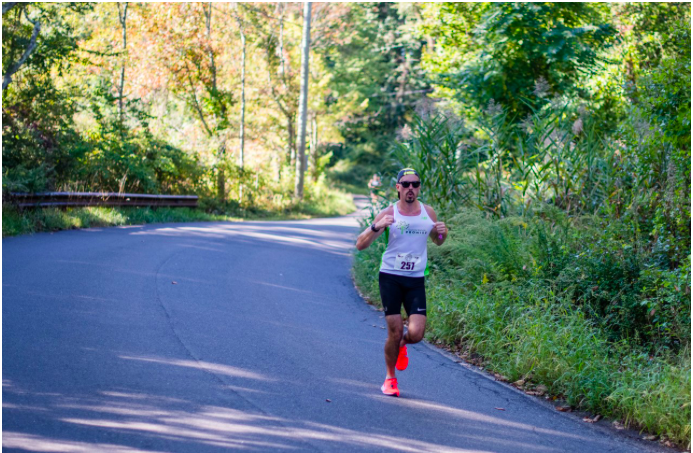 At the time he was asked to run last year’s New York City Marathon in support of a cause that’s become very important to him, New Canaan’s Sloan Alexander hadn’t done much running at all since his cross-country days at Guilford High School.

Alexander was already volunteering for Sandy Hook Promise and otherwise supporting the organization, which seeks to prevent gun violence and honor all gun violence victims through programs and practices that protect children.

To run the marathon as part of the Sandy Hook Promise team gave Alexander a reason to get back into the sport.

“I thought that would be an incredible thing to raise money for them,” he recalled.

“At the time, I was not that interested in ‘racing’ a marathon versus ‘running’ a marathon,” Alexander said. “I was just really excited about getting off my butt and into running shape again, and to see if I could do it. And then last summer when I did another half-marathon in Ridgefield, that is when it changed for me.”

A professional musician who works in New York City, Alexander said he realized that he could do more than just survive marathon-running, could push himself further in terms of fitness and health and do that while helping organizations that he believes in.

“I can do good in the world and be better with my health at the same time,” Alexander said.

On Nov. 3, Alexander will run the New York City Marathon for the second time as part of the Sandy Hook Promise team, and he’s already raised some $3,400 toward the cause, surpassing his initial goal (his fundraising page is here).

A founding member of Sideways, a local band that’s performed numerous times in support of Sandy Hook Promise—including the inaugural (and sold-out) “Music 4 Life” show held at the Carriage Barn Arts Center in March—Alexander since last year’s marathon has become more involved in both running and in organizations that grew out of the horrific December 2012 mass shooting at Sandy Hook Elementary School.

After Music 4 Life, he was asked to run as part of a Ragnar relay team in Massachusetts supporting Dylan’s Wings of Change, a foundation dedicated to the memory of Dylan Hockley, a 6-year-old boy with autism who was killed in Sandy Hook shooting.

He ran that race in May.

“The Ragnar experience was a realization of the idea that I have an opportunity to help other people,” Alexander said.

Father to 8- and 10-year-old girls, now students at South School and Saxe Middle School, Alexander said he hopes in the future to qualify for the Boston Marathon and to run a sub-three-hour marathon. He credited his wife, Sara Bakker, for supporting him this far.

“It’s such a sacrifice doing that distance in terms of your time, and there is no way I would be able to do this without my wife and the sacrifices that she has made, my family being so patient and my wife so patient,” he said. 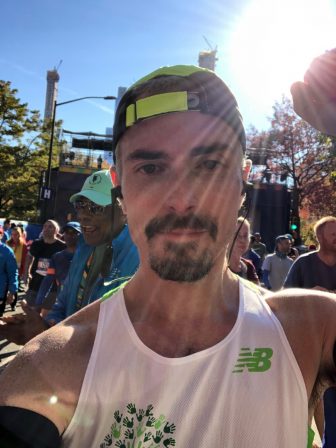 2018 NYC Marathon finish with the “26 angels of light” shining down. Photo courtesy of Sloan Alexander

Alexander since taking up long-distance running again has not only initiated a training program that sees him run in New Canaan, down to the water in, and through Irwin and Waveny Parks, but has also become profoundly connected to those most directly affected by the school shooting.

He noted that 26 first-graders and educators were killed at Sandy Hook Elementary and that marathons are 26 miles long. After taking a selfie following last year’s New York City marathon, Alexander said he noticed that the photo showed 26 rays of light over his shoulder. The number has taken on a “mystical” status, he said.

“We always, as a team, we talk about 26 angels on our backs and running and trying to remember each one of them for every mile,” Alexander said.