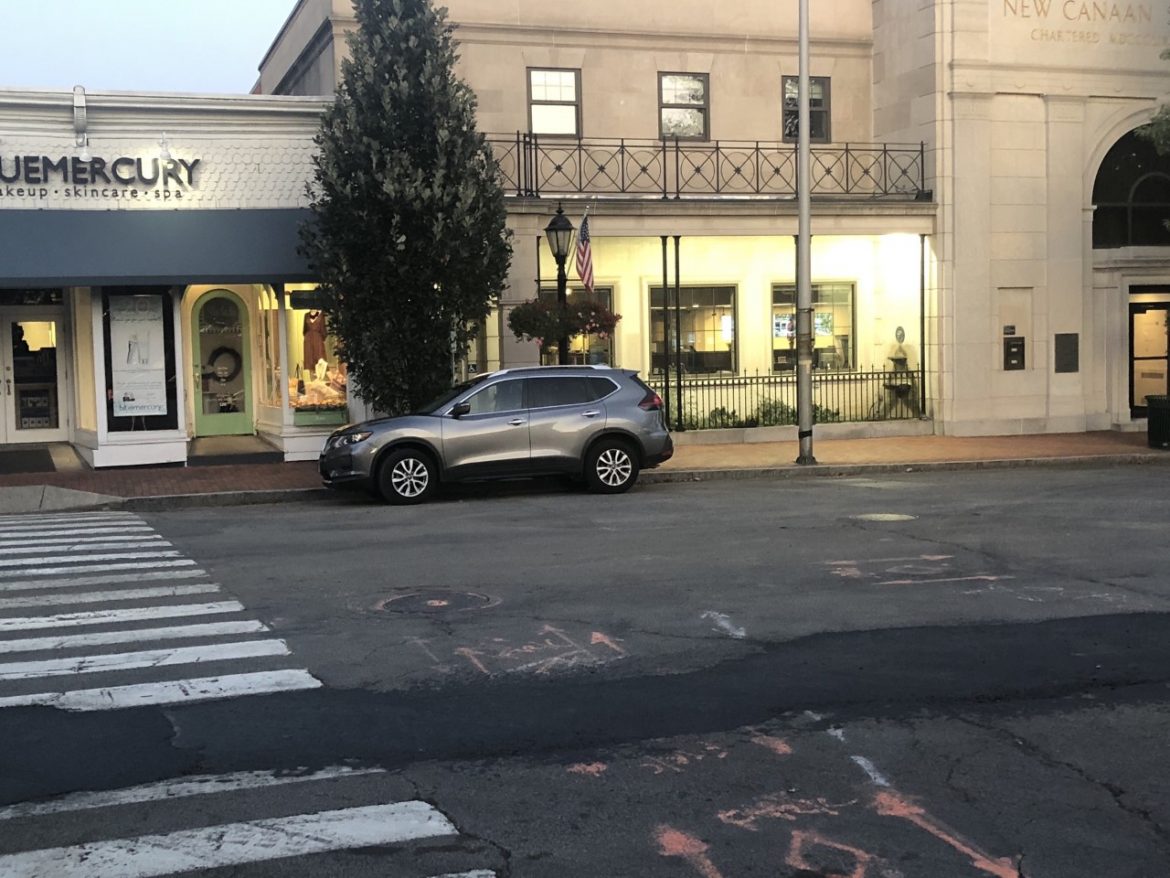 Not a parking space. BT photo

Though cars wouldn’t be allowed to sit in a parking space all day and enforcement officers would ticket overtime violators, New Canaan should look into eliminating metered parking downtown, Williams said during a regular meeting of the Board of Selectmen.

“It would be, I think, great for our town in the sense that it would be a talking point: Come to New Canaan, you don’t have to worry about putting money in the meter, don’t have to worry about running out of time,” Williams said during the meeting, held in Town Hall. “You would have to consider it can’t be a situation where you can’t park all day in Morse Court or elsewhere—maybe it’s two hours, maybe it’s three hours, that would be something for discussion— but I put that out there because we need to do whatever we can to support our downtown.”

Despite perceptions of overzealous ticketing among some, municipal officials reported recently that the town in recent years has issued fewer parking tickets, and generated less associated income as a result.

The town has estimated that in the fiscal year that ended June 30 it generated about $340,000 in revenue from parking meters. Total revenues from the Parking Bureau this fiscal year–including meters as well as permits, tickets, passes and fees—are projected to come in at about $1,357,000.

Total spending on the five-person parking department this year, including salaries, is budgeted at about $500,000.

Williams said, “We might look at this at the end of the day and say, hey it doesn’t make sense financially or for other reasons.”

It isn’t clear whether eliminating meters would trigger a change in enforcement practices or staffing levels in the Parking Bureau. Williams said that revenue from meters “might be offset by efficiencies that we could achieve by doing this.”

First Selectman Kevin Moynihan said that he’s met with Town Planner Lynn Brooks Avni, Parking Manager Stacy Miltenberg, Public Works Director Tiger Mann and Parking Commission Chair Keith Richey over the past several weeks “to identify a consultant” that would “work with the town and help us find the answers.”

“They tell me we don’t need a consultant, we can tell you what the answers are,” he said. “I got some very good input from the Parking Department yesterday. They consider the problem mainly the workers in town who we actually have plenty of parking spaces, we just don’t manage them very well.”

New Canaan has grappled for years with a parking crunch downtown, and about two years ago upped the parking time limit throughout the business district to two hours (some streets had been 90 minutes). Officials also have tried to get those who work in shops, restaurants and other businesses to use off-street permitted lots instead of taking up free parking—for example, on Main and Elm—that’s designed for those who shop or dine here. The town about three years ago created a new type of parking permit for downtown workers to that end, designating spaces in the Morse Court and Park Street Lots, and has urged business owners to obtain permits for their employees there or in the less expensive Center School Lot.

Yet not all business owners have complied with the request, Williams said.

“I spoke with [Chamber of Commerce Executive Director] Tucker [Murphy] and she is in favor of us looking at this,” Williams said. “And one of the things we discussed is that it is really incumbent upon the employers downtown to tell their employees ‘please don’t park on Elm Street, please park elsewhere because we want to turn over business.’ … According to Tucker some are great at it and some are not so great at it.”

Contacted by NewCanaanite.com after the selectmen meeting, Murphy said in an email, “I was very clear when I spoke with Nick that I think the idea of free parking should be explored in concept but there are always unintended consequences that we must be careful to think through before any drastic decisions are made. It also needs to be crystal clear that we still need enforcement and there will be time limits etc. This is just in an effort to address the ongoing parking woes and think out of the box. [O]ther towns manage to do this and we should at least consider it. If we decide it won’t work then so be it but at least we did our homework.”

Williams said that the meter machines are not only a turn-off in terms of money but also “from the pain” of being clocked in a parking space.

Williams said he had discussed the prospect of eliminating pay machines with Moynihan in the past. “I bring this up because I want [Selectman] Kit [Devereaux] part of that process,” he said. “I [would] love to hear your thoughts on this.”

Williams said, “The machines sometimes don’t work and I just hear that it’s a crunch on folks—not necessarily monetary but a pain to do that, so if we free that up, I think that would send a good message to folks thinking about coming to shop and dine in New Canaan.”

In April, 15 commercial properties owners gathered to discuss Planning & Zoning and parking issues. Murphy, who helped organize the meeting, told P&Z during an April 30 meeting that one finding from the gathering was a “hostile environment with parking enforcement,” according to a summary obtained by NewCanaanite.com through a public records request.