All legal on-street parking in and around downtown New Canaan is now two hours, as officials this week installed new signs designating the longer time limit. 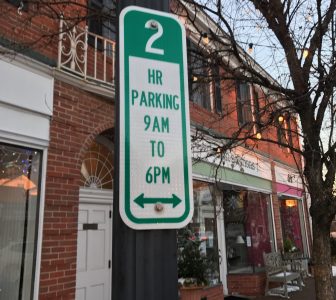 The change from 90 minutes throughout the central business district of Main and Elm Streets as well as some other areas is expected to address what has been a consistent and major complaint from shoppers and diners who said that wasn’t enough time.

“I think that people are going to be happy because they’ve been asking for it,” Parking Superintendent Stacy Miltenberg said. “I think it will give them more time to have their lunches and get services. Hopefully, we listened to what people wanted and they’re happy that we made the change.”

The Parking Commission suggested the change from 90 minutes to two hours last fall, and the Police Commission, New Canaan’s traffic and on-street parking authority, voted in favor of it in September. The Board of Selectmen in November approved a $17,000 contract with a Danbury-based company to create and install about 80 signs in and around the downtown.

Tucker Murphy, executive director of the New Canaan Chamber of Commerce, said she was “encouraged at how responsive the town was” to trying the new time limit.

“We heard repeatedly that the 90-minute timeframe was not enough and we are hopeful the two-hour limit will be positively received,” she said. “Our hope is that we don’t see abuse of the longer time by employees of local businesses. The point was to encourage and support local business.”

She referred to a nagging problem in downtown New Canaan, where those who work in retail shops, restaurants and service businesses like real estate firms take up the free parking that’s meant to serve their customers and clients. The town last year, at the Chamber’s urging, created new parking permits for downtown workers for the Morse Court and Park Street lots in order to address that problem.