Officials on Tuesday approved a contract with a Danbury-based company to create and install 80 signs in and around downtown New Canaan that will make all legal on-street parking two hours. 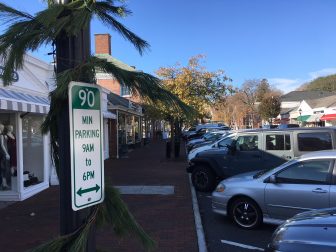 Members of the Board of Selectmen voted 3-0 at their regular meeting to green-light the contract with NY-CONN Corporation.

“Directionally this is good—if you were going from two [hours] to one or 90 minutes, then there would be a number of complaints,” Selectman Nick Williams said at the meeting, held in Town Hall.

He voted in favor of the $16,779 contract with First Selectman Kevin Moynihan and Selectman Kit Devereaux.

The installation of new 2-hour parking signs will realize a recommendation from the Parking Commission two months ago that was followed by a formal vote by the Police Commission. The major idea behind the change is to make parking limits throughout all of downtown New Canaan uniform, an improvement both for those who park in the center of the business district to shop or dine, as well as for parking enforcement officers.

The change in parking times will not take hold until the new signs are in place.

Pubilc Works Director Tiger Mann said NY-CONN’s price—$14,579 plus contingency costs—is “reasonable” though it was the only quote that came back to the town. The work will include replacing posts and signs, and in some cases moving the apparatus out of a sidewalk and into a grass strip—for example, to help with traffic flow and snow removal, Mann said.

Williams asked Parking Superintendent Stacy Miltenberg, a guest at the meeting, whether the Parking Commission in making its original recommendation also had considered a commensurate bump to its fine for overtime parking.

Miltenberg said the commission had not.

Moynihan asked whether the fees collected through parking fines could be expected to decrease as a result of the change.

“I am sure they will be down a little bit, but I still do believe that people will even extend past two hours,” Miltenberg said.

Williams added: “We will still get, ‘My dog ate the homework.’ ”

Miltenberg said that although Morse Court’s time limit has been upped from two to three hours because people said they needed more time, still those who pay for up to three hours on the meter remain past time.

Mann said the magnitude of the job meant it should be contracted rather than handled in-house, as municipal highway crews are preoccupied just now with leaves and other matters.