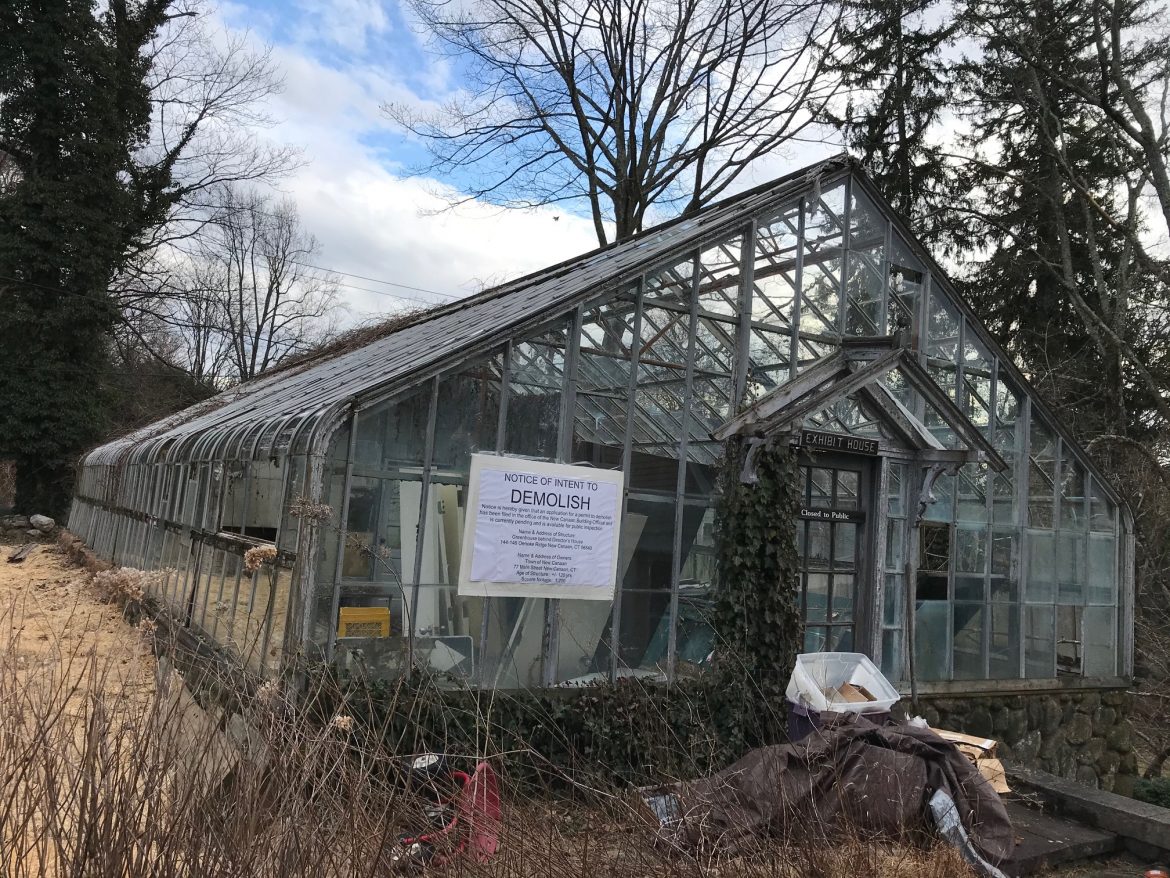 [Note: This article has been corrected to reflect a 4-1 vote, not a 5-0 vote as originally reported.]

Saying those seeking to raze a derelict greenhouse followed the process outlined in a local ordinance, New Canaan’s town building official last week told members of an appointed municipal body that he wouldn’t enforce their request to re-notice the structure. 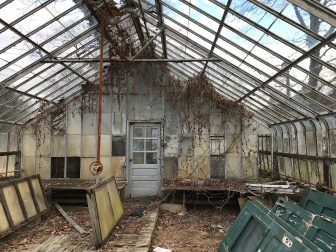 According to some members of the Historical Review Committee, the sign affixed to a ca.-1900 greenhouse at the New Canaan Nature Center failed to meet a requirement that it be posted “in a conspicuous location of the property on which the structure is situated” and that it’s “visible from the nearest public street or other accessway adjoining the property.”

Committee member Ed Vollmer said during the appointed body’s April 16 meeting that “there are people who are unhappy with what is going on and the destruction of the greenhouse because it is considered a historic building.”

Under local ordinance, if a letter objecting to a planned demolition is received within 15 days of publication of the notice in a newspaper, then the Committee may decide to impose a delay period of up to 90 days. In this case, however, the Nature Center’s notice was published Feb. 6, meaning the objection period expired Feb. 21—four days before a New Canaan woman filed her letter, which was therefore rejected by Town Building Official Brian Platz.

Vollmer said the Committee’s review and opportunity to impose a delay should have been triggered.

“Our job is basically to recognize this and to agree or not agree with the individual but not to have a chance to do this is very upsetting,” he said at the meeting, held via videoconference. “It is upsetting because that is what our purview is. So the fact that it was signed property is fine, but we did not have an opportunity to weigh in on it. And this is getting slipped into the cracks and is there no way to redeem or review this? Is there any way we can go back and what authority can we go to, to deal with it? We would like to see an opportunity for people in town to make a choice.”

Platz noted that he is the enforcement agent for the Committee as well as the demolition delay ordinance, saying, “It is my position that unless you can demonstrate to me a clear violation of the provisions of the ordinance, then you do not get a second bite at the apple.”

Even so, the Committee voted 4-1 in favor of a motion made by Secretary Rose Rothbart that the signage at the Nature Center “was not in compliance with the ordinance” and requesting that additional signage be posted on Oenoke Ridge.

Platz said, “I will not enforce that,” and the following exchange ensued:

Rothbart: You wont enforce what the ordinance says?

Platz: I will enforce what the ordinance says. The ordinance doesn’t say two signs. You can change the ordinance moving forward but you can’t do that retroactively for this application.

Rothbart: But can we request that for the town?

Platz: You can request whatever you want, but I am not enforcing it.

In addition to Rothbart and Vollmer, those voting in favor of the motion included Chair Mark Markiewicz and Marty Skrelunas. Andrew Melillo voted against.

Platz noted that even if the applicant—in this case, the town itself, as the Nature Center is situated on town property—did re-post demolition notices on Oenoke Ridge, that wouldn’t trigger the opportunity for any delay period, because the objection period lapsed.

Committee members said they would recommend changes to the ordinance to the Town Council Bylaws & Ordinances Committee. Specifically, the Committee said it would seek to flesh out the definition of “conspicuous” in the ordinance and consider a requirement for on-street signs where the structures to be demolished are on “interior” lots.

The physical sign itself is one of three ways that residents are notified of an intention to demolish a structure, under local law. Notice must be published in a print newspaper, and those seeking formal notice of any such application may sign up to be notified by certified mail from the town.

Yet the Committee also said there’s a problem with that form of notice. Specifically, Rothbart said that she didn’t receive a notice by certified mail even though she’s on the list.

Platz noted that what the local ordinance and State Demolition Code specifically require is confirmation that such notices are mailed, not proof of “return receipt,” as Rothbart described.

“Certified mail is just a confirmation from the Post Office,” he said. “You do not have to sign for certified mail, that is return receipt.”

Though the Committee voted in favor of the motion regarding a second sign, not every member agreed that the applicant in the case of the greenhouse had run afoul of the ordinance.

For example, when Rothbart said the sign on the greenhouse was “the absolute opposite definition of ‘conspicuous,’ ” Melillo noted that the language is meant to preempt an attempt to hide such a sign behind a tree or under vines (which this one wasn’t), and that the ordinance says it must be visible from a public road “or other accessway.”

“The sign was right in front of the building,” he said, adding, “It’s not being purposely hidden.”