Though a proposed new mixed-use building on Park Street meets New Canaan’s development guidelines generally in terms of planning for housing and streetscapes, it could dramatically alter an important vista downtown if it’s located too close to the road, officials say. 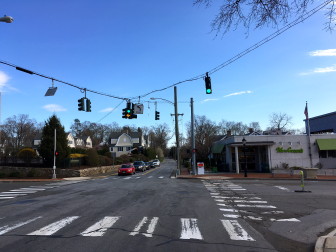 The view looking south on Park Street, on April 10, 2016. Planning & Zoning is considering whether and where to allow a proposed new, 2-story mixed-use (retail and residential) building at 121 Park St.—just past Mrs. Green’s in this photo. Credit: Michael Dinan

Replacing the small 1.5-story house at 121 Park St. with a two-story retail-and-residential structure that sits just five feet off of the sidewalk may not work “if you look at any context of the elevation looking down that street,” according to Planning & Zoning Commissioner Dan Radman, an architect.

“All of us drive down that street multiple times a day—you are going to have a 2.5-story structure right at the corner of that transformer, looming over Park Street,” Radman said during the group’s regular monthly meeting, held March 29 at Town Hall. 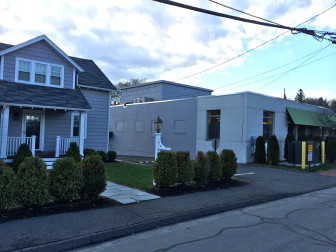 Plans call for the razing of 121 Park St. in New Canaan, to be replaced by a new, mixed-use 2-story structure that would abut directly the Mrs. Green’s building. Credit: Michael Dinan

“That creates a condition going southbound on Park Street which has a very will create a very large impression on the street, in particular because you have a got a new structure existing past [Mrs. Green’s] by about eight or 10 feet. I’m just worried about the scale of what we are creating here on Park Street, given the fact that not only is Mrs. Green’s several feet behind the property line, but everything else down that view is substantially more behind the property line, so now you are introducing a new element to the fabric of that street which is on top of the property line, right on that street. I can understand the argument for the [Plan of Conservation and Development] justification for the store building front coming to the property line in an environment like Elm Street or Main Street, where they do that, or any one of those downtown streets. But this one is kind of special. It’s kind of different, right? You’re right on that fringe of residential.” 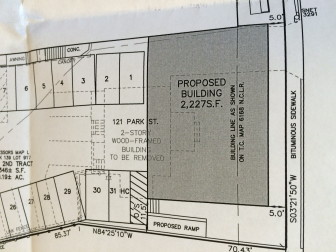 He spoke during the first public hearing on a multi-part application whose goal is to allow construction of a new mixed-use structure with 2,227 square feet for commercial space on the first floor and the same square footage divided between two residential units on the second floor.

The proposal would increase parking, its proponents say, as well as boost housing options, enhance the area’s character and—because it would be constructed directly up against the southern edge of the current Mrs. Green’s building—do away with the unsightly alley that now runs downgrade there.

The project’s architect, New Canaan-based Harvey Kaufman, conceded that the proposed new structure is far larger than what’s there now and that it would change the feel of Park Street, though “whether it’s back five feet or nine feet [from the sidewalk], I don’t think really makes a heck of a lot of difference.”

Underscoring its masonry and decorative trim, as well as the possibility for landscaping out front of it, Kaufman called the proposed structure “a classic New Canaan building.”

“What’s interesting is that Mrs. Green’s on the corner, the old Post Office, it’s a prominent corner but it’s not in sympathy with the aesthetic of the town,” he said. “We’re not trying to match it or do anything to blend in with it. We are trying to do a building that is more akin to what you see downtown or across the street on Park Street.”

The property’s owners, represented by attorney Stephen Finn of Stamford-based Wofsey, Rosen, Kweskin & Kuriansky LLP—were seeking to amend the zoning regulations in three ways. The proposed text changes would amend a “building line” provision so that the proposed mixed-use structure could sit closer to the sidewalk (see page 82 of the Zoning Regulations) and make allowance for two features of the proposed new building by Special Permit (they’re currently not allowed at all)—namely, for a common wall between the new structure and Mrs. Green’s, and for an exception in floor-area ratio for the second-story residential units.

Referring multiple times to the proposed structure as a “transitional building” that’s designed to link the downtown to the apartments that line much of Park Street to the south, Finn pointed to the recently updated POCD, saying it “provides for making buildings closer to the street for a better streetscape and pedestrian experience, and also to allow greater parking behind buildings.”

He added: “What we are proposing is that an architectural style for our building that will improve the transition between Mrs. Green’s, which is not very New Canaan-like, in my opinion, and the red brick structure to the south, rather than just having a house sort of planted in the middle, which we don’t think makes a very good transition at all.”

Ultimately, the commission decided to take up the proposed text changes to the zoning regulations (find them here)—voting unanimously in favor of them and with an effective date of April 15—while continuing the applications for Special Permits which would address those same newly revised regulations, and the site plan.

P&Z Chairman John Goodwin said that although the commission appeared to favor the zoning map change and the text amendments to the regulations made sense “from a macro perspective,” the group struggled somewhat with proposals regarding parking and the idea that the building would be sited so close to the sidewalk.

As part of the application, Finn is seeking a 25 percent reduction in the number of new parking spaces needed for the lot behind Mrs. Green’s—a reduction from 16 to 12, for a total of 31 spaces overall. Noting that the proposed residential units are close to a train station and that the mixed-use nature of the structure means it will be used by shoppers and occupants at different times, Finn pointed to a parking study which “confirms that there is ample parking currently and that there will be ample parking for the new building.”

Commissioner John Kriz said that, looking at a site plan that detailed parking spaces, it was hard to imagine how vehicles would get in and out of some spots.

“They don’t seem like usable spaces to me, just looking at the map,” Kriz said.

Finn responded that the spaces meet aisle length and width requirements, and that the newly configured lot would in fact be an improvement over what’s there now. P&Z also heard from Michael Galante, a consultant with Fairfield-based Frederick B. Clark Associates, who backed up Finn’s remarks with the findings of a parking study completed two weeks prior.

Town Planner Steve Kleppin suggested the applicant consider reducing the proposed building by 227 square feet, which would eliminate the need for one of its spaces—a solution that not only would help address the parking questions, but also allow the structure to shift back into the lot somewhat, allaying some of the concerns about its impact on the vista looking south on Park Street.

Commissioners asked during the hearing whether, if the alley from Park Street were eliminated, motorists could turn around in the parking lot behind the buildings (yes, and the alley now is dangerous when drivers seek to turn north out of it), whether the occupants of the proposed residential units would park in a lot out back (yes), how snow removal would be handled (it would continue to be stored on site and trucked off, as it has been for eight years) and whether there’s access to the parking lot from the rear of the proposed new building (yes).

P&Z is scheduled to meet next on April 26. The lot at 121 Park St. was once considered as a finalist for the new U.S. Postal Service branch in New Canaan.