Just over 18 months after opening, India restaurant on Main Street has closed, its owner said. 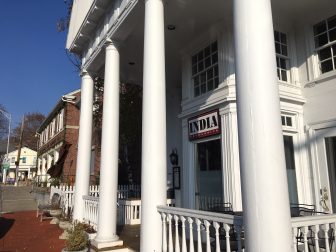 Chef Prasad Chirnomula said he’s closing the downtown eatery which since April 2016 has served classic Indian cuisine and signature dishes, as well as five other locations due in part to “longer structural income versus debt issues.”

He added that the restaurant itself did not fare well enough to support the considerable costs of operating it.

“I love the town, I love the people there but if you can look at Main Street alone the whole street looks empty, everything is for lease,”Chirnomula said. “And I think I have been in New Canaan and I have seen the peak and Main Street was nice and busy—parking was always an issue, but I think right now almost no businesses are open on Main Street. There are not enough diners. I don’t know. Does New Canaan have too many restaurants? It’s definitely a supply-and-demand issue. I love the restaurant where I am, but we just could not afford to keep the restaurant. It is just very expensive.”

A note affixed to the door on India ended with this teaser: “Please stay tuned for ‘Special Announcements.’ ”

Asked about it, Chirnomula he could envision opening in a far smaller space that focused on takeout and would be eager to do so in New Canaan, where his is a trusted brand with a base of loyal customers.

His New Canaan restaurants have served locals for nearly 20 years.

Chirnomula had run Thali out of the “bank building” at 87 Main St. for 16 years, until it closed in late-2015. A few months later—the day after Boulevard 18 closed up the street, at 62 Main St. near the firehouse—he announced that India would open there in the spring.

It did, following a six-week renovation.

Chirnomula said in the note that his customers’ “infinite loyalty and passionate reviews have consistently placed [India] as one of the top restaurants in Connecticut in several media publications.”

“I am proud and honored to have worked alongside some of the very best in the industry.”

He added: “We cannot thank you enough for your unforgettable part in our combined journey. We have made many many friends here. At this time we are so lucky to say something like ‘Goodbye’ that only makes it so hard.”