One year ago, New Canaan business owner Beth McCarthy suffered an aneurysm and subsequent strokes that nearly ended her life. 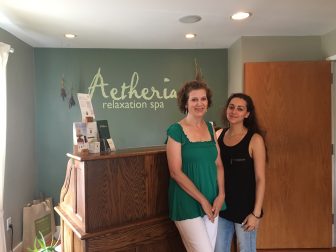 Then 46 years old, McCarthy—owner of Aetheria Day Spa, a Cherry Street mainstay for a dozen years—went into cardiac arrest twice on the way to Yale-New Haven Hospital’s Neuroscience ICU and would spend the next several months recovering at its Acute Stroke Rehab Center.

The traumatic experience has transformed McCarthy, she said.

“I try to take advantage of what’s happening now and what makes me happy now,” McCarthy told NewCanaanite.com with a smile on a recent afternoon from a cushioned chair in the waiting room at Aetheria, where she has resumed work.

She added: “I am better than ever, the healthiest I have ever been.”

The resilient McCarthy is not only back on her feet, but using her experience to bring awareness and appreciation to the first responders, medical, and military personnel whom she credits with saving her life.

McCarthy said she views her “long road” to recovery as “a sort of rebirth.”

On July 17, 2016, a headache complaint quickly turned life-threatening for McCarthy. She had suffered a subarachnoid hemorrhage and multiple strokes. The local hospital for McCarthy, a Bridgeport resident, was not equipped to handle her care and she was medevaced to Yale, family members have said.

The news stunned those who knew her in town as an active member of the New Canaan Chamber of Commerce admired for her compassionate nature and savvy business insight, according to Tucker Murphy, the organization’s executive director.

“When this all happened… I went to see her, and it was such a shock,” Murphy said. “It was truly devastating to see someone who was so alive and so vibrant [in that condition]. But when she looked at me, she was there.”

Even at McCarthy’s lowest, Murphy said she was able to identify her fiery spirit. McCarthy had been a member of the Chamber’s Board of Directors and had an “amazing marketing sense,” Murphy said. She added with a smile that McCarthy “was always on fire” and often had to be brought “back to reality.”

That drive and spirit appears to have sped McCarthy through her remarkable recovery.

“She went from the most dire prognosis one could have to now, [365] days after that, she’s Beth again, but she’s an even better Beth,” Murphy said. “While this was a setback for her, maybe everything happens for a reason. She’s come out better and stronger.”

And with a new appreciation for professionals who risk or devote their lives to save others.

McCarthy is preparing to make a special offer at Aetheria to first responders and military and medical personnel since they “played an important role in me being alive now.”

She also extends thanks to the residents of New Canaan for rallying around her recovery, and supporting her medical expenses through the GoFundMe her husband set up which raised more than $20,000.

“New Canaan is really good to me, and really helped through the whole experience,” she said. “[The support] is amazing.”

She also thanked Toula Moisiadis, her spa director, who took over in her absence.

Moisiadis smiled and shook her head in response to this praise, saying: “She’s an amazing woman and I would do anything for her. She’s my role model.”

“Physically, she was knocked down, but her spirit never went away,” Murphy said. “And she’s turning this around to help other people, which is so Beth. That’s what everyone loves about her, she thinks about others even when she is down. That is something to be admired.”

One thought on “‘It All Comes Full Circle’: One Year After Stroke, New Canaan Spa Owner Back at Work”