New Canaanites are rallying around a longtime local business owner who last month suffered a near-fatal aneurysm and stroke. 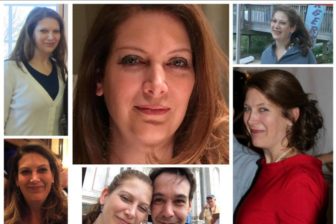 Photos of Aetheria Spa owner Beth McCarthy from her GoFundMe page. McCarthy is recovering from an aneurysm and stroke that nearly took her life last month.

Beth McCarthy, who founded Aetheria Spa on Cherry Street 11 years ago, on July 17 complained of a headache and then collapsed on her floor at home in Bridgeport, according to her brother Robert Skoglund, who recently launched GoFundMe page for his sister and family.

McCarthy narrowly survived the stroke— her husband, John, likely saved her life by performing CPR until EMTs arrived—then fell into a coma at Yale University Medical Center and was breathing with help from a ventilator before she began to recover slowly in recent days, Skoglund said.

A visible young woman in town who participates and supports multiple community causes and has served on the Board of Directors for the New Canaan Chamber of Commerce, McCarthy, 46, is medically insured though her bills are “starting to pile up,” her brother Robert Skoglund said.

Costs associated with her recovery could go into the millions, he said, and though McCarthy is insured, the coverage is “far from 100 percent,” while her out-of-pocket expenses continue to mount.

Asked what type of person his only sibling is, Skoglund said “first and foremost she is a very compassionate person.”

“She is always looking for ways to help other people live better, feel better, pass along being better,” he said. “She is very much a foodie. She likes the farm-to-table type of places. Loves getting into kitchen and cooking something up with her husband, John.”

He added that McCarthy has always been a prudent businesswoman who values connections with others.

“Beth managed to build a successful business here in New Canaan by getting to know her customers, what they wanted and how she could deliver it with the best service around,” Murphy said.

“In fact, Beth was so good at what she did that her business continues to flourish, even today in her absence, because of the incredible team at Aetheria. A few years ago we created a few events to help a family member of a Chamber board member who had also suffered a traumatic physical event and needed support from anyone that was willing to help. Beth never met the man but was the first to call when I put it out there and ask, ‘How can I help?’ ”

McCarthy “truly understands small business and the power of working together” and is known by scores of locals through her efforts in partnering with fellow businesses and organizations, Murphy said.

For example, together with Shirleen Dubuque, she founded the original New Canaan Dog Days event.

“Beth doesn’t even have a dog but she managed to make this event so successful and to create something that helped several businesses,” Murphy said.

Prior to coming to Connecticut, McCarthy grew up and lived in several places, her brother said, including Florida, Louisiana, Kwajalein Marshall Islands and Alabama (she graduated from high school in Huntsville, Ala., where her parents live).

Skoglund said that those in New Canaan who have heard about his sister’s illness have expressed shock concern, compassion, sympathy and a ready willingness to help. Any help that others can provide toward her surgery and rehabilitation expenses “would be very appreciated,” Skoglund said.

“Some will donate less, some will donate more, but every single dollar counts and will make all the difference towards her recovery—both physically and financially,” he said.

As of Tuesday afternoon, 54 people had contributed a total of more than $5,000 in the four days since McCarthy’s GoFundMe page went live. It shows an overall goal of $600,000.

Immediately after her subarachnoid hemorrhage and stroke, McCarthy had been transported to the hospital there, but “the specialized medical care she needed wasn’t available” in the city, Skoglund said.

She then was medevac-ed to Yale, where she was stabilized and moved to the neuroscience ICU, he said.

McCarthy has made progress in the past few weeks, he said, and now is in an Acute Stroke Rehab Center.

“She still has quite a ways to go,” Skoglund said. “We have repeatedly been told this will be a marathon, measured in months, not in days or weeks, and we should pace ourselves accordingly.”

Noting that McCarthy “is making phenomenal progress each and every day,” Murphy said that “there will be many challenges ahead—physically, emotionally and financially.”

“But Beth can do it and we can all be there to help her get the job done,” Murphy said.

One thought on “‘She Is a Very Compassionate Person’: New Canaanites Rally Around Local Business Owner Recovering from Aneurysm, Stroke”