Plans to construct a pair of dwellings on vacant Weed Street lots—and in particular, the proposed removal of 426 mature trees, in part to make way for an artificial pond—are raising concerns among neighbors worried about runoff and preservation as well as the project’s feasibility and scope.

Saying he’s “not a tree hugger” and understands well a New Canaan property owner’s desire to have a beautiful home, still the proposed clear-cutting of 384 and 386 Weed Street for one full-sized single-family home is not reasonable, Ronald Drake of Parish Lane told the Planning & Zoning Commission Tuesday night.

“From an aesthetic perspective and environmental perspective there is no way that 426 trees should be cut down for a single family dwelling, by any measure—at least by my measure, I would say it is excessive,” Drake told the commission during a public hearing, held in the Douglass Room at Lapham Community Center.

“I applaud the imagination and ingenuity in the landscaping that is necessary to accomplish [this plan], but again, something I would try to impart to you tonight that it is important to maintain some degree of natural beauty that makes New Canaan what it is.” 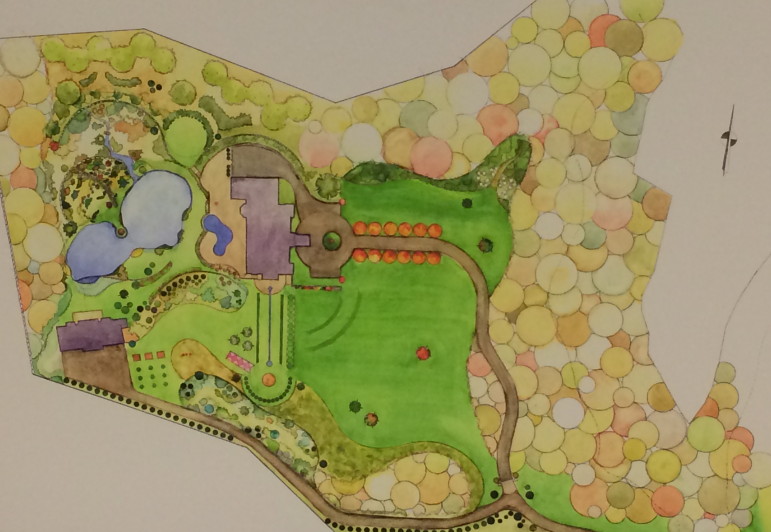 Here’s a landscape architect’s rendering of the site plan for 384 and 386 Weed St. The pond at the property’s western end will require the removal of hundreds of mature trees. Courtesy of Sean Keating of Stamford-based TLC Lawn and Landscaping Service

The Weed Street property owner is applying for a special permit as the site plan calls for extensive excavation and soil disturbance (at 6.2 acres—see section 6.4.G on page 120 of the New Canaan Zoning Regulations here). Speaking on the owner’s behalf, two professionals—Juan Paredes of Landtech and Sean Keating of Stamford-based TLC Lawn and Landscaping Service—noted that the properties in question already had been approved for a subdivision that would have brought similar clear-cutting and new impervious surfaces, and that the large mature trees slated to come down already are tagged.

Paredes added that the focal point of the landscaping, a proposed pond, is part of a larger master plan, and that the applicant at first had considered just going for the structures and related improvements alone.

“I want to go back to what was originally approved by subdivision, which called for 6.1 acres [of soil disturbance],” Paredes said. “We believe this is substantially similar [to the new plan] with the difference that we will have two single-family residences.” 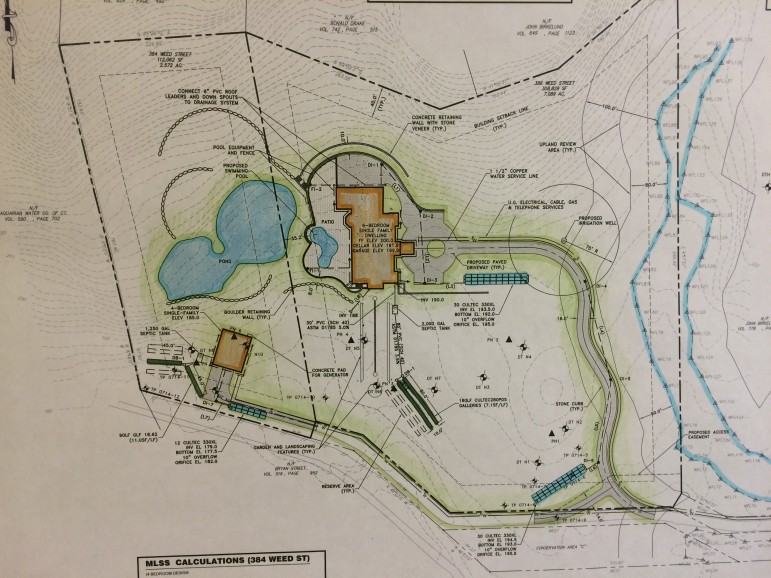 Site plan for 384 and 386 Weed St. Courtesy of Juan Paredes of Landtech

According to tax records, one buyer—Todd Holson—purchased four contiguous properties on Weed Street last May and June: 14.57 total acres at $6,275,000.

The plan now is to combine two lots into a single 7.089-acre parcel that will get two single-family dwellings, an access driveway, patio, pool, pond with landscaping features and associated utilities.

A partial driveway coming off of Weed Street already is in place, and the proposed work will not take place near wetlands, Keating said.

Commissioners asked about drainage plans, whether more sustainable features could be introduced, proximity to wetlands and screening for neighbors and—in response to a builder’s description of an extended construction period based on where the removed material could be taken—pushed for an accelerated schedule in order to minimize disruption.

Ultimately, at commissioner Laszlo Papp’s suggestion, P&Z decided to require the applicant to fund the cost of a peer review studying the impacts of runoff and drainage.

Paredes had told the commission that “in essence, runoff will be close to zero” based, in part, on soil types found on the property.

William Pike of Indian Waters Drive told the commission that he’d lived on the street for 45 years and never had a runoff problem. As his property sits topographically lower than the lots proposed for development, Pike urged P&Z to make sure that “there would be no runoff of erosion problem associated with what looks like” extensive excavation.

Bryan Street, also of Indian Waters Drive, said he’s most likely to get any runoff from the properties and that before any of the properties north of him, he had no problems. Then one lot on the upper tier was developed and New Canaan saw two “25-year storms) in five years “and I got a foot of water in my backyard, flowing straight across after the clear-cutting had been done, and that immediately created significant runoff.”

Christina Fagerstal of Weed Street said she was speaking on behalf of herself, a neighbor who lives near the lots in question and others “who cannot speak” for themselves, including children then attending a Boy Scouts meeting, “wildlife in the trees and our atmosphere” which requires trees to turn carbon dioxide into breathable oxygen. Fagerstal called flooding “a big concern,” noting that Weed Street was “extremely frightening” during Irene and Sandy.