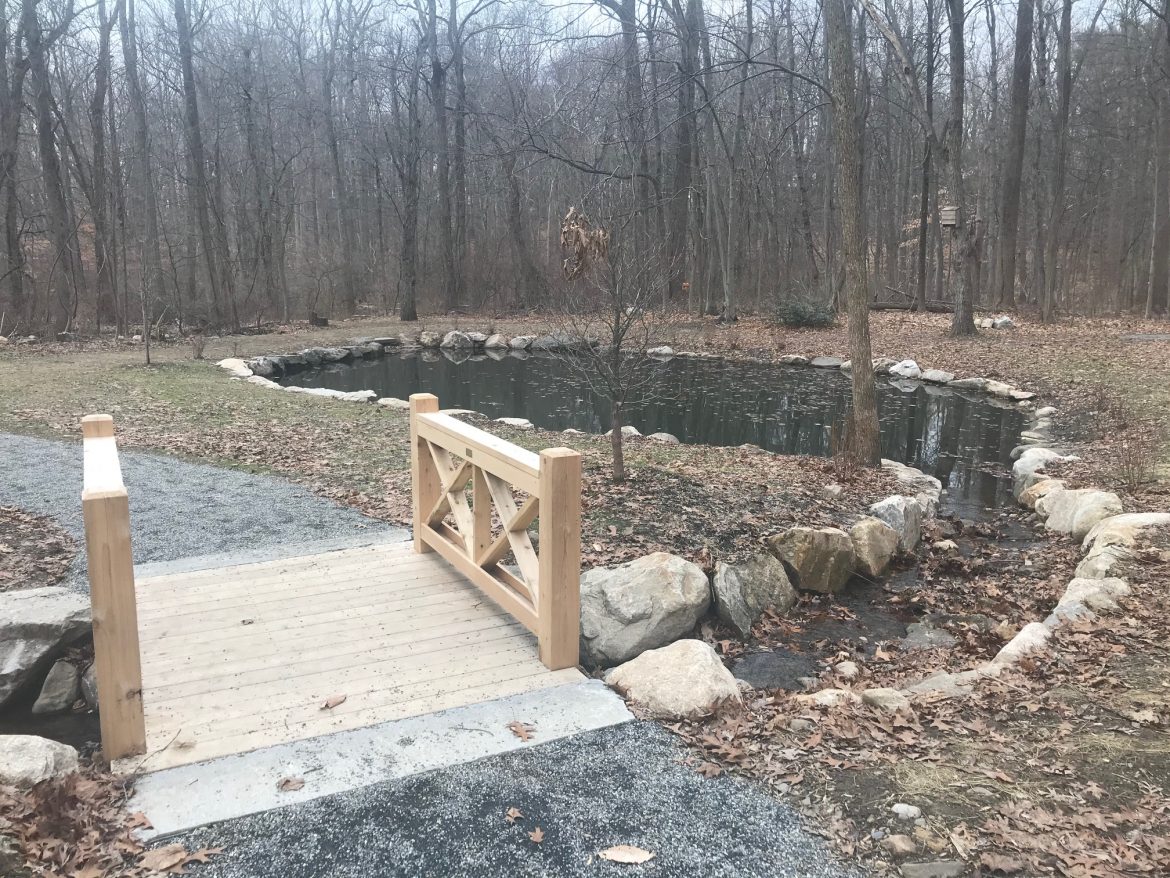 The completed first phase in restoring a long-neglected and little-known bird sanctuary in New Canaan—one of the nation’s oldest—is earning high praise from town officials and visitors. 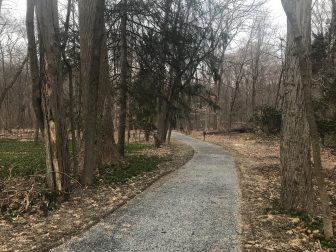 Responding to a presentation from Public Works Director Tiger Mann on the work that’s been done in Bristow in the past six months, Commissioner Francesca Segalas said, “It looks so wonderful.”

“I am so happy to see this,” she said during the meeting, held Jan. 13 via videoconference.

Mann shared a photo walkthrough that he’d captured the same morning, starting at the northern end of the 17-acre bird sanctuary—accessible through Mead Park, at the back of the little league baseball fields—and following pedestrian trails toward its other entrance along Route 106. As he walked along, Mann said he found the park “very quiet.”

The dredged pond material is being used to create a wildflower meadow, Mann said, and lookout areas are planned for visitors who already will find rehabilitated bridges, cleared areas and benches at a sitting area overlooking the stone-edged pond that he called the “jewel” of Bristow.

The work that started after this fiscal year began July 1 has been “outstanding,” Mann said.

“I would call us ahead of schedule since … we kind of incorporated the pond dreading into this first phase of work, because it was best to do it early,” he said. “That way we could incorporate the [dredge] spoils and we were not disturbing areas that we had actually beautified while trying to then do additional work inside the pond. So the feeling was do some of the hard labor inside and then work ourselves back out again. If you look at just the park itself, Chris Schipper has done a really nice job as far as some amenities go.”

Mann credited Schipper with creating an area and receptacle where visitors can contribute money for birdseed, and a box that resembles a bluebird nest box for storing it.

“And then through the park you will see different birdhouses that we have purchased for him that he has installed himself and maintained,” Mann said. “It makes it nice throughout kind of looking at the variants that he has done. But the best thing I saw was people. People using the park.”

Schipper, a guest at the meeting, thanked Public Works, Mann and Parks Superintendent John Howe specifically, as well as the New Canaan Community Foundation, which set up a fund for the Friends of Bristow Park and Sanctuary. The organization’s goal is to fully restore Bristow for its 100th anniversary in 2024.

Asked about the New Canaan Community Foundation’s interest in supporting the work at Bristow, its president and CEO, Lauren Patterson said the organization “is here to support our town’s charitable giving, and helping to establish and support charitable funds is one growing part of this effort.”

“Housing funds like the Friends of Bristow Bird & Wildwood Preserve at NCCF helps project leaders raise important philanthropic dollars, and focus on their project and campaign goals,” she said. “NCCF provides the ‘back office’ support in administering the fund, and guidance in the effort. It’s a great option that allows our town’s residents to put their energy into important projects, without the need to establish separate new nonprofit entities. We’re so proud to partner on the progress at Bristow, as we’ve long supported environmental efforts in our community.”

Future plans call for repairing fencing and shifting the main gate at Bristow’s southern entrance, installing new plantings as part of New Canaan’s pollinator pathway, creating a new wetlands walkway and designing a four-car pull-off along Old Stamford Road. Mann also said he’d like the sidewalk that terminates at Park Street and Route 106 to run down at least to Bristow’s entrance (if not all the way up to the intersection at Gower Road).

“Given the way park is being utilized and given the amount of work we have done, I think we would be remiss in, if we can’t extend the sidewalk all the way down 106 to Gower, we should at least make the connection with Park Street, which would then combine us with the greater portion of town itself,” he said.

Commissioners asked whether the birdseed storage container would be painted (no it’s cedar that will age in color), who’s feeding the birds (volunteers), whether the walkways are crushed gravel (it’s the same material that’s used on Waveny trails), whether invasive species have been removed (volunteers and Boy Scouts have cut some invasives back, and removal and replanting is to come) and why possibilities for future parking don’t include siting spaces further off of 106 (there’s an embankment and stone wall along the existing fence line).

“Can’t wait to see the next round,” she said. “I’ve walked it, too, recently. It’s beautiful. Another place for people to enjoy in New Canaan. It’s great.”

Bristow has been described by its advocates as an important piece of the town’s walkable “greenlink” connecting public parks. Schipper was instrumental in bringing the concept to reality, securing a conservation easement to connect Irwin Park to the New Canaan Nature Center.

3 thoughts on “‘It Looks So Wonderful’: High Praise for First-Phase Work Done in Bristow Bird Sanctuary”