An attorney representing Michelle Troconis—girlfriend of accused wife-killer Fotis Dulos—on Thursday filed a motion seeking to have charges of tampering dismissed. The motion, which doesn’t address a charge of conspiracy to commit murder, focuses on police evidence that Troconis accompanied Fotis Dulos in dumping bags of items, some of which were later found to have Jennifer Dulos’s blood, at receptacles around Hartford. The body Jennifer Dulos, a mother of five who went missing May 24, 2019, has never been found. In New Canaan, rocks painted in her memory with the message “Justice for Jennifer” continue to be placed around and inside the Lapham Road entrance to Waveny Park, where police have said Fotis Dulos transferred his estranged wife’s body from her SUV to a worker’s truck after killing her at her Welles Lane home. (Fotis Dulos killed himself last January.)

First Selectman Kevin Moynihan said during Tuesday’s Board of Selectmen meeting that he “was on vacation the week before last when the incident occurred on the U.S. Capitol.” Moynihan added, “I did not see the video until the next day. It was a horrendous and disgusting actions that occurred at the U.S. Capitol and no one endorses political violence and I certainly join those who condemn the actions of violent people.”

As of Thursday night, about $7,500 had been raised toward a $40,000 goal to help a beloved New Canaan business family that has fallen on hard times. The parents of Michael Molgano, who has been a quadriplegic for 43 years since breaking his neck while diving into a pool at age 17, ran Forest Street mainstay Lou’s Kitchen until about 12 years ago when they were forced to close due to high costs, friends say. Molgano’s pension is coming to an end in March, according to a GoFundMe page seeking to raise fund to help him remain in a custom-made home with his parents, who are now on Social Security. Here’s a video regarding the family’s situation:

Police at 9:16 p.m. on Jan. 14 cited a 20-year-old Queens, N.Y. man for possession of marijuana following a report of a suspicious vehicle parked on Running Brook Lane.

Meals-on-Wheels of New Canaan in an e-newsletter this week rerouted that “December was a very busy month” for the organization. “Thanks to the generosity of so many in our town, our clients received cards, flower arrangements, goodie bags and Christmas Stockings along with their meals. We would like to thank Toddler Time, Mrs. Harrington’s Fifth Grade Class at Saxe Middle School, Kids Care Club at East School, National Charity League, and the Garden Club of New Canaan.”

Town Councilman Penny Young at the start of a public government meeting Thursday said that those gathered—including herself, Councilmen Cristina A. Ross and Robin Bates-Mason, Public Works Director Tiger Mann, Parks and Recreation Commission Chair Rona Siegel and New Canaan Police Animal Control Officer Allyson Halm—were not having a real meeting but “just a discussion” about the future of New Canaan’s animal shelter. When a staff member from the office of the first selectman said she was preparing to start recording the Zoom call, Young asked whether it needed to be recorded. (She was told yes.) Young starting in 2017 served as a co-chair, with Board of Finance member Amy Murphy Carroll, of an ad hoc committee studying town-owned buildings that state officials later found to have run afoul of state sunshine laws by holding illegal meetings during the summer.

During the same public meeting, officials said that it won’t be possible to convert a town-owned residence in Kiwanis Park into a new animal shelter—a prospect that Moynihan aired this month—if it’s found to be located in a flood zone.

Congratulations to 2018 NCHS graduate Dylan Wietfeldt, a Food Science major at Cornell University, on making the Dean’s List for Fall 2020.

An owner of Baldanza Café said in an email to NewCanaanite.com that the restaurant will not, in fact, reopen in town as once planned. 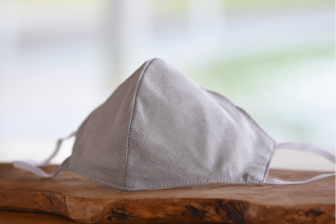 The Design for Freedom mask. Photo courtesy of Grace Farms

Grace Farms announced last week that the organization joined Herman Miller in introducing an ethically manufactured face mask, with proceeds supporting Design for Freedom, a movement “to eradicate modern slavery from the building materials supply chain,” according to a press release. “The release of the mask coincides with National Slavery & Human Trafficking Prevention Month.”

Selectmen Nick Williams and Kathleen Corbet joined the first selectman during Tuesday’s Board meeting in approving the hiring of Barry Setayesh and Michael Esposito as full-time firefighters with the New Canaan Fire Department. Both are long-serving volunteers with New Canaan Fire Company No. 1.

The NCHS Scholarship Foundation will hold its first-ever “NC Color Drop” on March 31. During the event and fundraiser, a Bell407 helicopter, courtesy of HeliNY, will hover over Waveny before safely releasing more than 1,000 colored golf balls over a designated target. Purchased balls will have an assigned number and the closest to the target will win a 2021 Peloton Tread. There will be 2nd and 3rd prize winners as well. All proceeds will be donated to the New Canaan Scholarship Foundation for need-based scholarships given to NCHS graduates. Tickets will go on sale March 1.

Police Chief Leon Krolikowski reported during Wednesday’s Police Commission meeting that psychiatric calls increased by 47% in 2020—from 34 to 50. The rise is likely “related in part to a lot of stress and related issues to the pandemic.”

The New Canaan Building Department on Jan. 11 issued a permit to build a 5,660-square-foot home at 963 Oenoke Ridge. 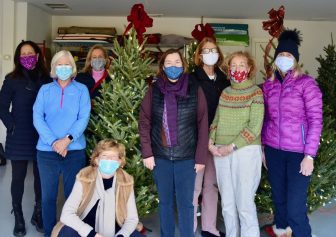 Finally, a shout-out to the New Canaan Garden Club, which assembled and decorated 10 tabletop boxwood trees for Waveny LifeCare Network for the holidays. The organization that’s been deeply affected by the COVID-19 pandemic. Designed to add some holiday cheer, the boxwoods’ installation marked the first time that Waveny was allowed to bring in live plant material since last spring due to COVID restrictions. In addition, at the Club’s annual Greens Workshop held in conjunction with the New Canaan Beautification League, members assembled large wreaths for municipal buildings, added bows to standard wreaths and created evergreen gnomes that went on display around town. To assist local families, the Club did a version of its yearly tree decorating event for the Christmas Stroll. And six trees were given to Human Services to be delivered to residents in need of some holiday cheer. Generous club members also donated $3,250 to Human Services to benefit its Warm-Up Fund and the New Canaan Food Pantry.