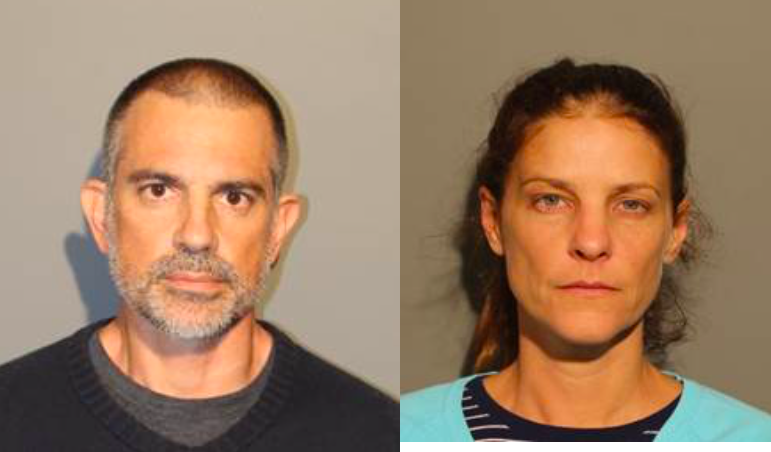 Police on Saturday night charged the estranged husband of a missing New Canaan woman, and his girlfriend, in connection with her disappearance.

New Canaan Police at 11 p.m. Saturday charged Fotis Dulos, 51, and Michelle C. Troconis, 44, both of Farmington, with tampering with or fabricating physical evidence, and first-degree hindering prosecution—eight days after she went missing.

Jennifer Dulos, 50, has been missing since May 24. New Canaan Police Chief Leon Krolikowski said in a press release issued Sunday morning that missing person and criminal investigations in the case both are “active and dynamic.”

“As the criminal investigation progresses, additional criminal charges are expected,” he said. “At the time of this release, Jennifer has not been located, and the search is ongoing. If Jennifer is located, we will provide additional information.”

Fotis Dulos and Troconis were taken into custody in Avon and transported to New Canaan Police headquarters for processing on the felony-level charges, on warrants reviewed by the state’s attorney and signed by a Superior Court judge. Each is being held on $500,000 bond. They’re expected to appear Monday in state Superior Court in Norwalk.

Described as vengeful and dangerous by Jennifer Dulos, Fotis Dulos had been embroiled in a bitter custody dispute since she filed for divorce in 2017. Last year, his mother-in-law filed two lawsuits, claiming Fotis Dulos owed her more than $2.5 million in unpaid loans, including money lent to his construction business.

Jennifer Dulos in making an application to the court for emergency sole custody of their children described her husband’s behavior as “irrational, unsafe, bullying, threatening and controlling.”

“I am afraid of my husband,” she said in the application for an emergency ex parte order of custody, made the same day she filed for divorce. “I know that filing for divorce, and filing this motion will enrage him. I know he will retaliate by trying to harm me in some way. He has the attitude that he must always win at all costs. He is dangerous and ruthless when he believes that he has been wronged. During the course of our marriage, he told me about sickening revenge fantasies and plans to cause physical harm to others who have wronged him. For example, flying a plane over an ex-client’s home and dropping a brick on his house. I fear for my family’s safety and I believe him to be highly capable and vengeful enough to take the children and disappear.”

He didn’t, though the court in early 2018 awarded Jennifer Dulos sole physical custody of the children after finding that Fotis Dulos had violated some terms of a temporary joint custody agreement. Among other violations, the court found that Fotis Dulos had exposed his kids to Troconis (and her own young daughter) at a time when it was disallowed—a fact verified by video surveillance taken by a private eye—and also that he had done psychological harm by telling his children to lie.

Jennifer Dulos disappeared after dropping her kids off at school on the Friday morning headed into Memorial Day weekend. Friends reported her missing at 7:30 p.m. that night, and police quickly located her car on Lapham Road near Waveny, triggering a multi-agency search that has seen investigators scour the woods in New Canaan, including at the beloved park, with dogs and special equipment.

Following her disappearance, members of the community voiced feelings of helplessness as well as concern for her children, whom police have said are safe. The community scheduled vigils for Jennifer Dulos and quietly rallied behind the family, whose members have acknowledged the local support. In an idea that gained momentum through Facebook, people in both Farmington and New Canaan are planning on Monday night to put candles out front of their homes to show that they’re thinking of Jennifer Dulos.

At the same time, nonlocal media descended on the town, reporting breathlessly on search activity and rumors about active missing person and criminal investigations—forcing police in some cases to correct mistakes while relatives asked for privacy. People who work at TV stations also read the work of reporters aloud during their news shows, repeating some of those mistakes.

An interfaith vigil for Jennifer Dulos has been scheduled for 6 p.m. Sunday at St. Mark’s Episcopal Church (to be live-streamed here).

In part of a statement issued Friday through police, her family said: “Jennifer, we love you and we miss you, and we remain hopeful that you will return to us safe and sound.”

“This law enforcement team launched both a missing person investigation and a criminal investigation, and they have worked together throughout the State of Connecticut,” he said.

New Canaan Police are seeking video surveillance from homes or businesses with cameras that capture vehicular activity on roadways. If you have such a surveillance video system, please save video from Wednesday, May 22 to Saturday, May 25, and to please e-mail New Canaan Police Officer Kelly Coughlin at Kelly.coughlin@newcanaanct.gov with your contact information and address. Please do not send any video content. Additional information will be provided to those who email Coughlin.