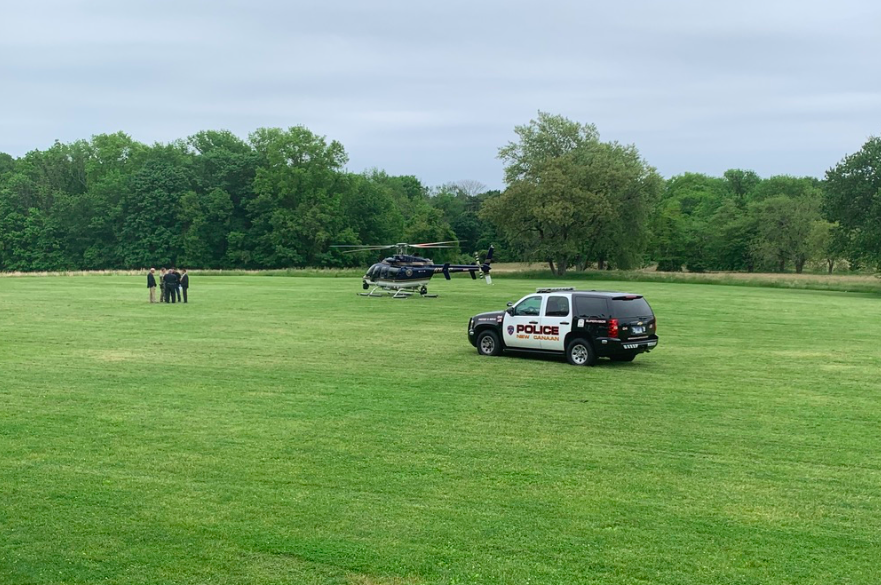 New Canaan Police and other law enforcement agencies gathered at Waveny on May 29, 2019 during an active search for Jennifer Dulos. Some officials circled above the park in a helicopter. Photo credit: Julia Stewart

Police said Wednesday that authorities have launched a criminal investigation in the case of a missing local woman to determine whether she was harmed.

Jennifer Dulos, 50, was reported missing at about 7:30 p.m. Friday and has not yet been located, according to New Canaan Police Lt. Jason Ferraro, the department’s public information officer.

She first was reported missing by friends who “indicated that they had not heard from her for approximately ten hours, and she had missed several appointments during the day,” Ferraro said in a press release.

“The last time one of the friends had contact with Jennifer was earlier in the day after Jennifer had dropped her children off at school,” Ferraro said. “Jennifer was believed to be driving her 2017 black Chevy Suburban at the time she dropped off the children at school. At no time were the five Dulos children missing.  Additionally, the children are safe and with family.”

The new details come as the police case, which is now both a missing person as well as a criminal investigation, dominates local and regional news headlines and tugs at the hearts of many in New Canaan.

Dulos has been described by some who knew her as warm, highly intelligent and devoted to her five young children. She filed for divorce two years ago and had been embroiled in contentious custody proceedings with an estranged husband whom she feared, according to court documents. 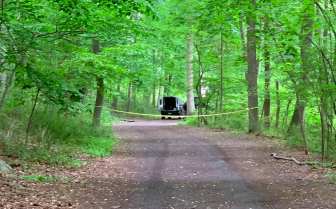 New Canaan Police cordoned off areas of Waveny Park near the pond with police tape on May 29, 2019, during an active missing person investigation. Photo credit: Julia Stewart

Police said that after receiving the initial call that Dulos was missing, officers checked her residence in New Canaan. She was not found there, though a short time later, an officer found her 2017 black Chevy Suburban on Lapham Road near Waveny Park, Ferraro said in the release.

“Jennifer was not inside the vehicle,” he siad. “K-9 units from surrounding law enforcement agencies checked the area for Jennifer but were not successful. A subsequent Silver Alert was issued for Jennifer.”

“At the time of this release, Jennifer has not been located, and the search is ongoing,” Ferraro said.

Since receiving word last Friday that Dulos was missing, the New Canaan Police Investigative Section in partnership with the Connecticut State Police Western District Major Crime Squad, and with the assistance of federal law enforcement agencies, has “worked around the clock to locate Jennifer by exploring all leads and tips,” Ferraro said.

Ferraro added: “As with any investigation information from the public is critical, and we continue to ask for the public’s assistance by using the New Canaan Police Tip Line phone number at 203-594-3544.”