In the 1970’s and ’80s, New Canaan could boast but a fraction of the number of restaurants that now dot the town. And while New Canaan had decades to go before finding its niche in the culinary landscape, there was one establishment where entire families would invariably go for special events, post-game or post-concert meals.

That place was Brock’s. 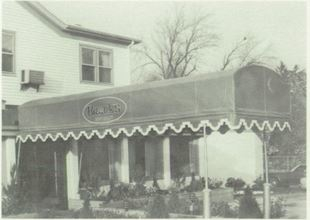 Brock’s was the brainchild of longtime New Canaan resident T. Brock Saxe, founder of Tombrock Corporation, a real estate investment and management company operating out of offices housed above the former New Canaan Brock’s location at 111 Cherry Street. Prior to becoming Tombrock in 1970, Saxe’s company was called White Tower Management, which since its incorporation in 1926 operated hundreds of White Tower restaurants throughout the country.

In 1970, Saxe’s father Thomas E. Saxe created and opened the Brock’s franchise, Irish-themed family restaurants which featured what many called the biggest and the best salad bar around. The restaurant was so- named as it was the maiden name of Thomas E. Saxe’s grandmother and T. Brock Saxe’s great-grandmother.

The first Brock’s location was on High Ridge Road in Stamford with other branches to follow in Norwalk and West Hartford. The New Canaan outpost came about after Saxe acquired a commercial property at the bottom of Burtis Avenue, before Cherry Street was extended eastward past Main Street. 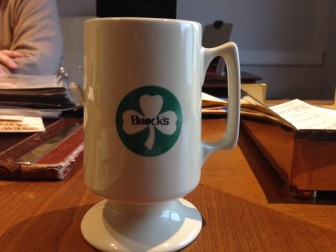 Once the location of the Pease Company and the Fairty Machine shop, Saxe’s purchase of what eventually became Brock’s turned out to be a shrewd business move once the “Circle Route” was completed and Cherry Street brought additional vehicular traffic—and added value—to the site, which Saxe had earmarked for a restaurant with a slightly different concept from that of Brock’s.

“We originally started with a family restaurant,” Saxe said. “We had Brock’s over in Norwalk and in Stamford. And so we wanted to make this different, so we had a name-this-restaurant contest, and we came up with the restaurant name of ‘Calliope.’ That was an organ that drove the merry-go-rounds.”

The name didn’t stick and eventually Calliope morphed into the tried-and-true concept of Brock’s. Steak, lobster and Irish stew were some highlights of the menu. Harp, Guinness and Irish whiskey flowed at the bar, which was the place to be on St. Patrick’s Day. Then there was the bottomless salad bar, a concept borrowed from nearby Chuck’s Steakhouse in Darien, but marketed to the hilt by Brock’s. There was a special kids menu as well—one of only a few places at that time to offer one—replete with crayons and a coloring book, and not to be taken for granted in the days before iPhones were invented. 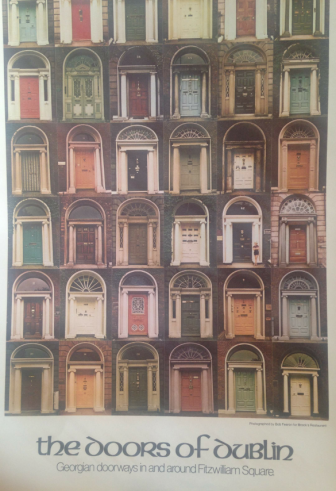 In addition to the instantly recognizable shamrock logo, Brock’s featured a well-known poster in each of their locations called “The Doors of Dublin”. The poster was created by New Canaan resident Bob Fearon, who had worked for the Irish Tourist Board. Fearon had created a huge portrait out of 36 photos he had taken of different Georgian doorways in Dublin’s Fitzwilliam Square. Saxe and his father happened upon the portrait at a downtown art show that New Canaan once hosted back in the 70’s.

“My father said, ‘Boy isn’t that great? You’re having an Irish-themed restaurant. Why don’t you use this?’,” Saxe recalled. “That became in every one of our restaurants a very prominent artifact as you walked in.” 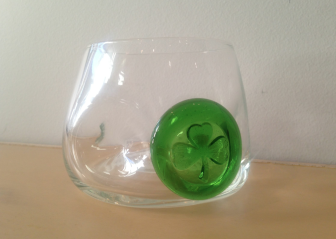 With a vibrant atmosphere, the famous salad bar and a reasonably priced and versatile cuisine that appealed to all ages and tastes, Brock’s continued to thrive in New Canaan well into the late-1980’s. Saxe ultimately decided to exit the restaurant industry altogether and transform Tombrock into its current incarnation. The space where families once shared great meals and memories is now occupied by Swirl and Divaz Hair Salon. The first Brock’s location in Stamford was also the last, closing in the mid-2000’s. And although he has no regrets about leaving the culinary scene as Tombrock has flourished in the real estate business, Saxe said he does look back on his time operating Brock with some measure of fondness.

“It was a fun place to bring the family,” Saxe said. “It was great seeing people happy. That’s one the things about the restaurant business…it’s a happy business if you’re running it correctly.”

15 thoughts on “‘It Was Great Seeing People Happy’: A Look Back at Brock’s”