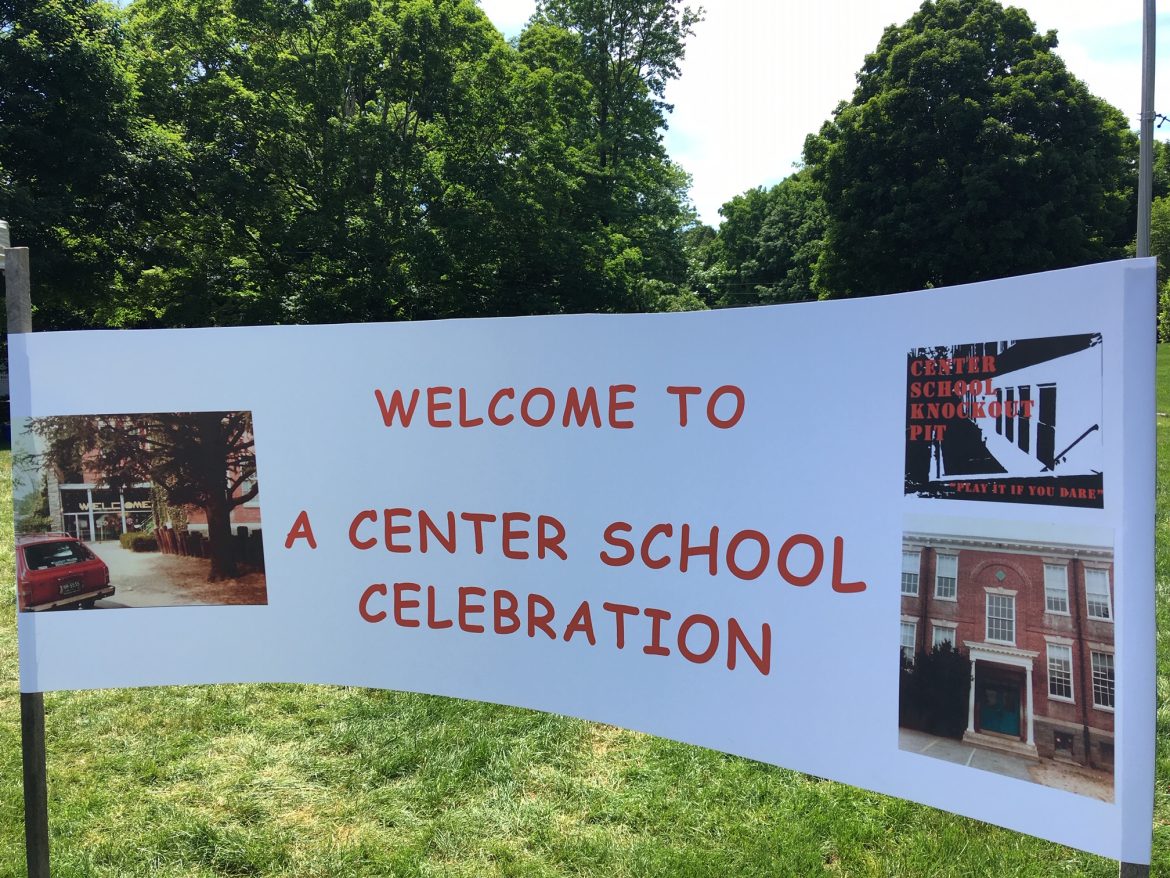 Cady Carroll knew ahead of time that this weekend’s gathering in New Canaan of her former elementary school community would be emotional. 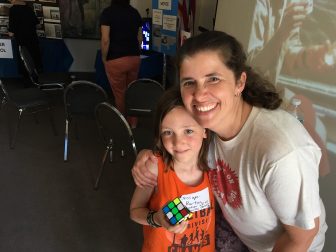 Jessup Burton (with a Rubik’s Cube) and Cady Carroll at the “Center School Day” gathering, on June 8, 2019. Credit: Michael Dinan

Yet in reconnecting with fellow Center School students, parents, faculty and staff during a first-of-its-kind remembrance held at the New Canaan Historical Society, Carroll said she found it “so much more emotional than I thought it would be.”

“There is no way to describe how much anybody who went to Center School connects with someone else who went to Center School, it’s on a level that you can’t explain,” Carroll said from a bustling conference room filled with Center School photos, news clippings, memorabilia and displays. “It’s a family and a home. And when I see a brick, a Center School brick, I am immediately transported into sadness that the building isn’t there anymore. And I can’t visit it. I want to revisit it, and revisit the memories.” 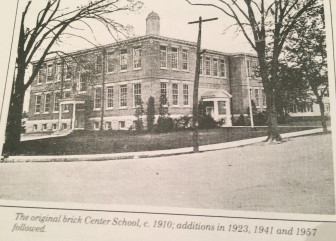 Built in 1909, Center School stood near the southeastern corner of South Avenue and Maple Street until 1983 when district officials, lacking foresight among other things, decided to tear down the building to make way for a municipal parking lot.

Even so, the mark that Center School made on its educators and families has sustained, and on Saturday, hundreds of former Center School community members journeyed to the Historical Society under clear, sunny skies to reconnect with each other and experience movies, slideshows, sing-a-longs, bread-making and a formal introduction of the cherished school’s educators during the all-day event. 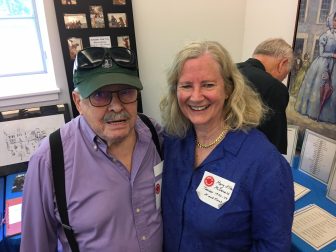 Conceived by Hazel and Mike Hobbs, Gail and Bailey Stewart and Bill and Mary-Ellen McDonald and realized with help from many volunteers (see below), “Center School Day” for former principal Dr. Steve Rubin was “a wonderful reinforcement of a terrific time.”

“ I just love the interaction among all the staff,” Rubin said from the shade of a tree on the Historical Society’s front lawn, where teachers gathered to embrace each other and their former students throughout the day. 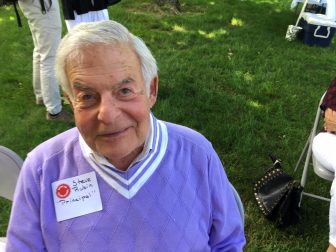 “I have tears in my eyes,” Rubin said.

Mary-Ellen McDonald, who led the organizing effort for this Center School Day, said after the event that it was “fabulous.”

“Everybody had such a great time,” she said. “It was wonderful to have so many Center Schools all together.”

At once highly innovative and anachronistic, the school under Rubin’s stewardship developed a unique approach to curriculum and education that fostered a dynamic, interdependent environment for teachers and that saw students learn in individually tailored and hands-on ways. 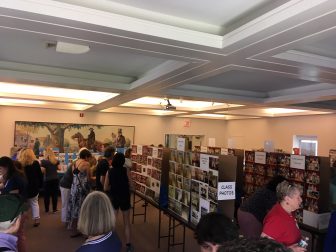 As often as they remember a “ski school”-style math system that allowed students to progress through lesson segments taught by different teachers throughout the school, those who attended Center talk about the “Knockout Pit,” a sanctioned form of dodgeball played in a narrow, sunken cement corridor. A red rubber kickball of the kind that kids whipped across the Knockout Pit’s centerline—sometimes with rather violent results (Mary-Ellen McDonald said she inquired about re-creating the Pit for the celebration but was told it could not be insured)—was on display for the event, along with dozens of class and other school pictures, beloved musical recordings playing through a PA system, an old classroom desk, original brick and 1974 informational video created by educator Hazel Hobbs that spotlighted a curriculum of musical composition, computer programming, a student-manned weather station and the school’s singular educational approach. 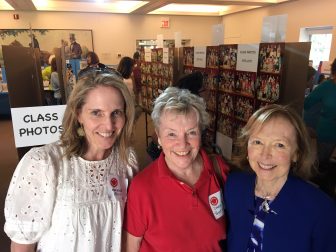 “Center’s pervasive philosophy is that each child as a separate and particular person is special,” Hobbs is heard saying in the video. “Here we no longer speak of ‘remedial’ or ‘enrichment’ programs for a small percentage of children. Rather, each student is treated as a unique blend of talent and needs which the educational program must meet by individual means.” 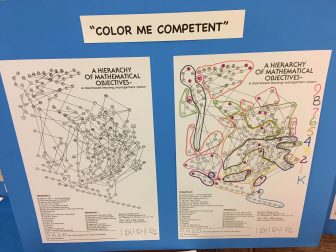 Center School students each had a red hard plastic folder with this form stapled inside, tracking our progress through an individualized system of learning math. This display from “Center School Day,” held June 8, 2019 at the New Canaan Historical Society. Credit: Michael Dinan

Hobbs said she hoped people would watch the video and “see a different way of having education.”

“And I never had that in school after that,” she recalled. “I was confident in math and then Center School was closed, and then I hated math from then on. I couldn’t do it any more. And it just breaks my heart, because I needed that.” 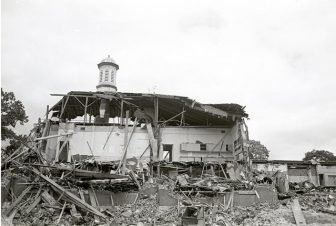 Elaine Dormer Halas Scott said after the gathering that it felt similar to a family reunion. 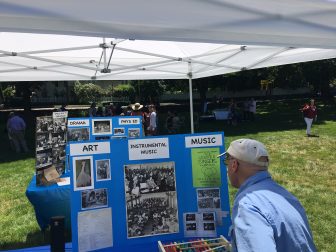 Some of the displays outside during “Center School Day,” held June 8, 2019 at the New Canaan Historical Society. Credit: Michael Dinan

“It was like a family—we have always said that Center School was a family, and it felt like that when we came back,” she said. “There were parents that I saw that I hadn’t seen for 35 years. And you just embraced every one. The kids came back—they’re adults now, they came back with children of their own. There just wasn’t a dry eye. People were just so excited to see each other, and hugs all around.”

Doug Stewart, who attended kindergarten and first grade at Center before it was shuttered, said the celebration brought back memories of the school. 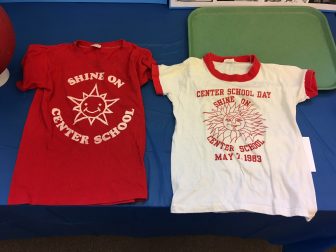 Some of the old “Shine On Center School” T-Shirts, on display at “Center School Day,” held June 8, 2019 at the New Canaan Historical Society. Credit: Michael Dinan

“It was such a special place, so there’s a lot of nostalgia and just the fact that we are able to have such a great turnout, with all of the teachers and the principal, it’s just a special feeling,” he said. “I was glad to bring my son by, and show him as well.”

Asked about the prospect, Mary-Ellen McDonald said all the displays created for Center School Day are being saved. Anyone who wants to organize an event in the future may borrow them, she said.

13 thoughts on “‘It’s a Family and a Home’: Center Schoolers Gather To Remember a Special Place and Time in New Canaan”