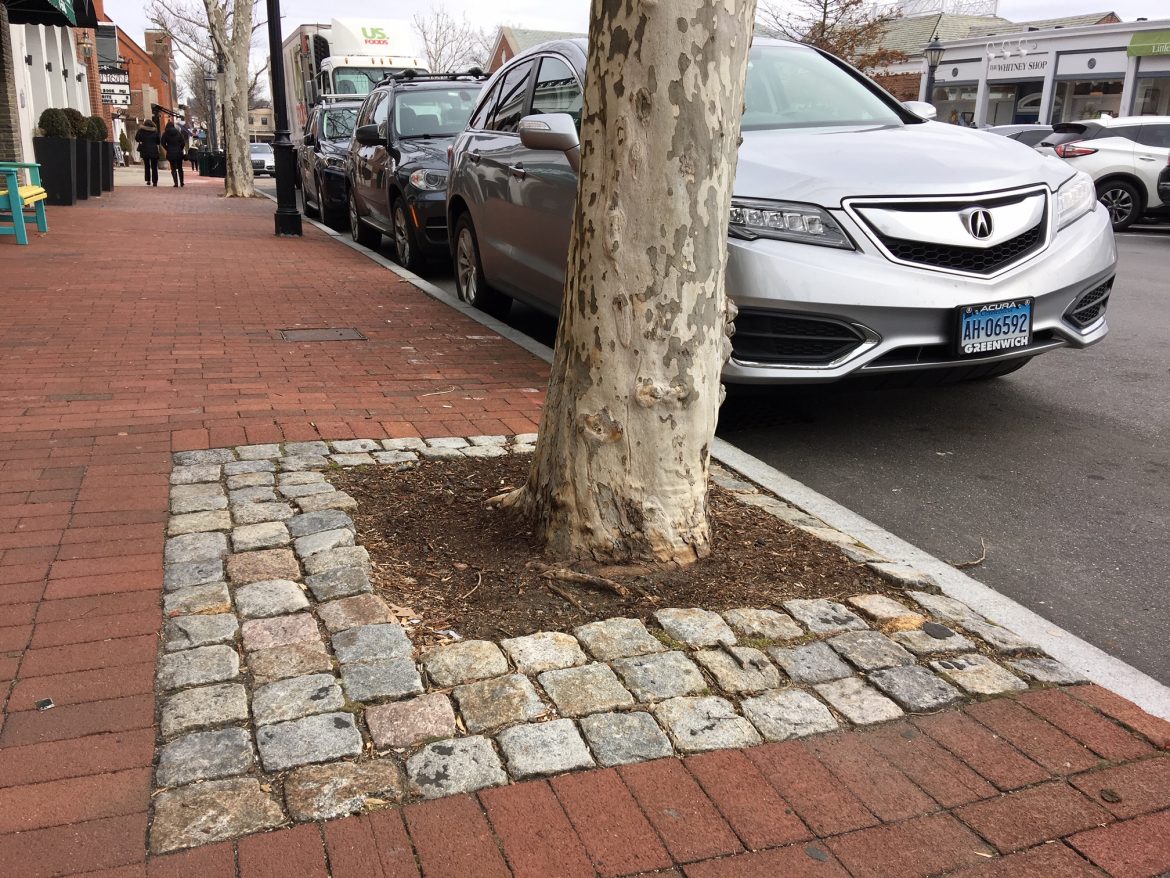 A tree well on Elm Street in New Canaan. Someone actually complained about why the Belgian block patters are not uniform. Credit: Michael Dinan

Responding to an inquiry about a lack of uniformity, officials said the reason Belgian blocks laid around sidewalk trees in downtown New Canaan have different patterns is because the trees themselves grow at different rates.

Some trees also have roots that rise from the ground, which leads town workers to remove the blocks and open up the tree well, according to Public Works Director Tiger Mann.

“It’s very difficult to keep it as a uniform three-by-three-by-three,” Mann said during a recent meeting of a Planning & Zoning Commission subcommittee. “It’s just not possible.”

“The original design was made for the brick and then inside the tree well there was going to be small Belgian blocks, the little squares. Basically they were designed to be tucked up against the tree trunk, and then as the tree grows, you start to remove the Belgian block to open up the tree well. So you don’t have any litter that falls in. You don’t have any problems if you want to mulch around it, you have a little area to mulch around it just next to the base of the tree. So then as the tree grows, you start to take some off.”

The comments came during the Jan. 29 meeting at Town Hall of a P&Z subcommittee that oversees the implementation of New Canaan’s Plan of Conservation and Development, a guiding document that’s periodically updated. The volunteer POCD Subcommittee also discussed enforcement of ordinances and regulations downtown, signs and sidewalk obstructions.

According to Mann, the only way to have total uniformity in the Belgian block around trees would be to do away with all of them.

“And at that point you have a large tree well with nothing in it, which I think looks worse than having ones that are, I guess, ‘eclectic’ would be the best way to describe it,” he said.

P&Z Secretary Jean Grzelecki, who chairs the subcommittee, noted that “as the tree gets bigger, it needs more room.”

Mann said the system is functioning as designed by a local landscape architect.

“I think it works very, very well,” he said. “So we go in and mulch around each of the trees three times a year, before Memorial Day and then once before the Sidewalk Sale and before everyone comes back on Labor Day weekend. It actually helps keep the mulch intact. If it’s not there it will just scatter around the sidewalk.”

“The tree warden goes around and looks at everything and sees what needs to be done,” Mann said. “He will prune if he needs to. We have done some [fertilization] but it’s not a standard course.”

One thought on “‘It’s Just Not Possible’: Public Works on Belgian Block Patterns Around Trees Downtown”