Bankwell CEO Chris Gruseke and his management team already were tracking COVID-19 infection rates, deaths and government regulations related to the pandemic daily as the rollout of vaccines got underway earlier this year.

The New Canaan-based company was in the early phases of its widely anticipated move into a new building at Elm and Grove Streets, and as workers moved into offices and cubicles, Gruseke and his managers “were encouraging people to get the vaccine, we were wearing our buttons and badges around the office,” he said. 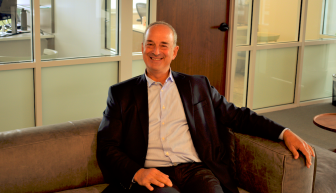 “Being an employer and being a public employer and being responsible for other people’s lives, also being a member of the community, we are monitoring this daily,” Gruseke, a New Canaan resident, said from his glass-windowed corner office at 258 Elm St.

“What are the regulation changes and what is happening in Connecticut and what the CDC is saying? And we were always on the most conservative ends of the discussion. And the more we got into the pandemic the more we realized, ‘Wow, why aren’t people getting vaccinated? This makes no sense. And if it’s going to take motivation, that’s what we are going to do.’ Look, for sure I understand there is real nonpolitical vaccine hesitation out there. Many people have a good reason. They could be afraid it could do something to their health and they need to talk to their doctor. There might be a religious belief. Who knows? Certainly there are parts of society that have not been treated great by the government and have good reason to be hesitant. But that’s different than, ‘I’m going to have a microchip in my body.’ ”

Following multiple company meetings via Zoom, Bankwell put a policy into place on July 15 that its approximately 100 New Canaan employees would have two months to get fully vaccinated. The company is now 100% vaccinated, Gruseke said. A few Bankwell employees were terminated due to noncompliance with the policy, he said.

In instituting its own company policy when it did, Bankwell was out ahead of federal mandates issued this month that require employers with more than 100 workers require them to be vaccinated or test for the virus weekly.

In New Canaan, with its proactive and efficient Health Department, low COVID-19 infection rates, high percentage of vaccinated residents and vibrant business community, employers in many instances are urging their workers to get the vaccine, even if they’re not required to.

Walter Stewart’s Market didn’t mandate vaccination among its 70-plus employees, but as soon as the vaccine was made available, the company’s HR director started keeping track of who had received shots and who was eligible, according to Vice President Doug Stewart.

“Working with the town, we were able to get a large number of our employees vaccinated through New Canaan, and we are up to, I think, 98% of our staff is vaccinated at this point,” he said. “So although we didn’t mandate it, we have really encouraged it and as a result we are almost at that 100%.”

He added, “Just purely from a safety stance, we felt like we had been through this whole pandemic and now that vaccines are available we really wanted everyone to have access and everyone to follow through and get vaccinated.”

Similarly, Steve Karl, vice president of Karl Chevrolet, said that as soon as the vaccine was made available, the company urged its employees to get their shots. Now, all of the company’s nearly 40 employees are vaccinated, he said.

“While we never forced anyone to have it, we strongly encouraged everyone, and while the final couple might have felt a little peer pressure, everyone in the organization ended up getting vaccinated,” Karl sid. “Our local health director was also instrumental in coordinating some on site vaccinations where several employees were actually vaccinated here at the dealership.”

Leo Karl III, Karl Chevy’s president, also serves on the board of Waveny Lifecare Network and as such receives regular updates through Waveny, area hospitals and the state Department of Public Health. He said that “we are all incredibly fortunate to live and work in a community that took this pandemic seriously, rallied around each other and took steps early on to inform and protect our residents.”

Leo Karl III added, “When you look at the science, and all of the statistics around vaccination, it is clear that the vaccine is protecting those who received it from severe illness, hospitalization and especially death. It just makes sense.”

According to the most recent reporting period tracked by the state DPH, issued Friday, New Canaan’s rate of 5.3 infections per 100,000 population is the lowest in all of Fairfield County. Wilton is at 7.4, by way of comparison, Ridgefield at 8.9 and Darien is at 9.9, according to the DPH data.

For Gruseke, Bankwell doing what it could to ensure the health of employees and customers amid the pandemic amounted “our patriotic duty.”I’m not a doctor, but the data is overwhelming,” he said.

Though many companies and some Bankwell employees had put off getting vaccinated into the first months of this summer because the federal government at the time was still categorizing the vaccine under an “experimental” or “temporary emergency clearance,” Gruseke said he and his management team made their decision based on the relative COVID-19 hospitalization and mortality rates of those who were vaccinated versus unvaccinated.

“The experiment has been done, that’s the result,” Gruseke said. “It’s such logic. What else do you need to know? We have 97 to 98% of people who are hospitalized or dying have not had vaccine. That’s the experiment. Right there.”

As other local businesses did, Bankwell has put in place public health- and safety-related protocols such as masks, social distancing and cleansing throughout the pandemic.

“That included, by the way, during the pandemic we gave $500 a week childcare to our employees,” Gruseke said. “That was a big deal. Childcare was the thing that really hurt most families. So we tried to treat employees like family. We always do that.”

One thought on “‘It’s the Right Thing To Do’: Local Businesses Urge or Require Employees To Get Vaccinated”