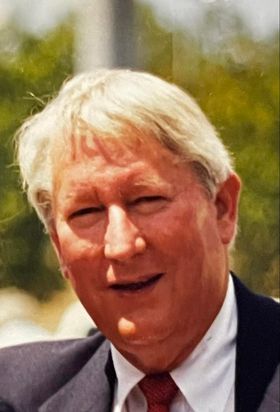 John graduated from Wayne High School in 1956 and went on to the Wharton School of Business at the University of Pennsylvania. He was a fraternity brother at Beta Theta Pi and a member of the swimming and basketball teams there, graduating in 1962.

He served in the U.S. Army Reserve and during his career worked at multiple firms on Wall Street. Younger traders called John ‘Robo-Pop’ because of all his replaced joints.

He and his wife, Eleanora Pizzuto Crosby, settled in Green Pond, N.J. to start their family and moved to New Canaan in 1990. Already a die-hard New York Giants football fan, and season ticket-holder in the days of Phil Simms, John would become a big fan of the New Canaan High School Rams football team. He also loved golf, and any and all seafood.

In addition to his parents, John was precessed by his loving wife of 45 years, Eleanor, his beloved son, Chandler Crosby, and brother Jay.

A celebration of John’s life will be held at a later date.