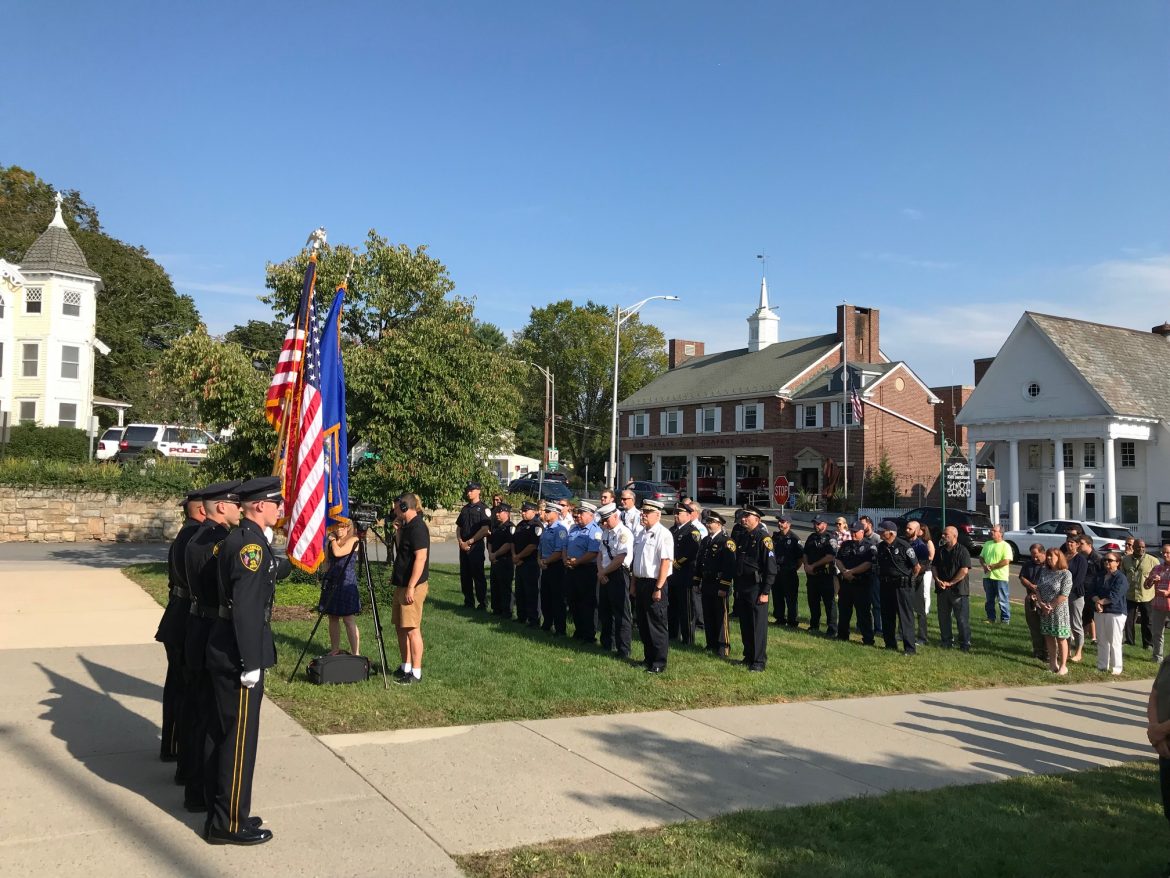 On a Tuesday morning 18 years ago, New Canaan commuters Joe Coppo and Eamon McEneaney boarded a train to get to their trading desks in lower Manhattan, the town’s highest elected official recalled. 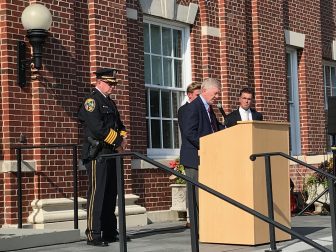 While those 46-year-old men started their day “as many Wall Streeters from New Canaan do,” Brad Fetchet, 24, who grew up in town “arrived early at his trading desk at the World Trade Center at the Wall Street Street firm he had just recently joined,” according to Kevin Moynihan.

Within two hours of arriving for work, all three were killed.

“Three shining souls among nearly 3,000 innocent people whose lives were taken at the World Trade Center on September 11, 2001, just because they showed up for work,” Moynihan told more the 120 residents, police, firefighters, EMTs, municipal workers and government officials gathered out front of Town Hall on a clear, sunny morning for a ceremony honoring those who perished during the Sept. 11 terrorist attacks and as a result of responding to it. 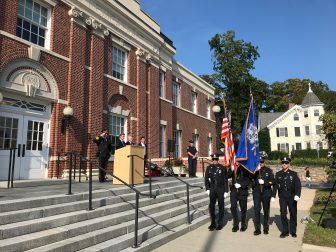 “In addition to the innocents who died that day just because they showed up for work, several hundred New York City first responders—police, fire and EMS —died that day rushing to help evacuate the World Trade Center. Their deaths were not in vain: Several thousand more innocent lives at the Trade Center were saved that day because these heroes did the jobs that they had sworn to do, to save lives in the face of danger. We remember all those heroes today as well. Joe, Eamon and Brad—each was a treasure to our town.”

The U.S. flag was presented by the New Canaan Police Department Color Guard and a wreath was placed in front of the firehouse across Main Street that included three carnations, each representing one of the deceased local men. There at the New Canaan Fire Department stands a 16-foot section from the floor of World Trade Center Tower One on the 99th floor, just above the impact point of United flight 175.

The ceremony included an address by New Canaan Police Chief Leon Krolikowski, invocation and benediction led by the Rev. Dr. Stephen Chapin Garner, a clear-voiced rendition of “God Bless America” by St. Luke’s School student Henry Jodka and 10 seconds of silence to remember the three New Canaan men lost in the attacks. Fire officials rang a bell 5-5-5—a pattern used during the telegraph era to signal that a firefighter has died in the line of duty.

Krolikowski said that Sept. 11 “forever changed our world” and that “the New Canaan community came together on that tragic day and continues to come together to honor the lives lost that day.”

“We can all remember precisely where we were, and what we were doing on September 11,” he said. “Although it was 18 years ago it feels like yesterday for many of us. Just as the Greatest Generation remembers December 7, 1941 – the attack on Pearl Harbor, September 11 has shaped who we are, how we live and what we believe in. Specifically, we remember the following events which occurred 18 years ago.”

“On September 11, terrorists attacked our great nation and took the lives of 2986, men, women and children who were living their lives on a typical Tuesday morning. They were bankers, pilots, flight attendants, mothers, fathers, brohters, students, sisters, children,” he said. “They were police officers, firefighters and EMTs who took an oath to protect, no matter how great the risk.”

Krolikowski remembered the three New Canaan men who perished in the attacks and said that locals also remember the 6,954 “brave servicemen and servicewomen whom selflessly served our country, and gave their lives in the War on Terror, which began on September 11, and continues to this day. We must never forget.”

“Today, 18 years after September 11, no words, and no ceremony, can replace these losses,” he said. “But what we must do is reflect, and honor each day for those we have lost and we must never forget. The most fitting ceremony for the lives lost on September 11, is not etched on the memorial across the street, and is not the ceremony today, but it is etched in our hearts as we enjoy the freedom that was made possible by the grave sacrifice of the many lives that have been lost from September 11 forward—let us never forget.”