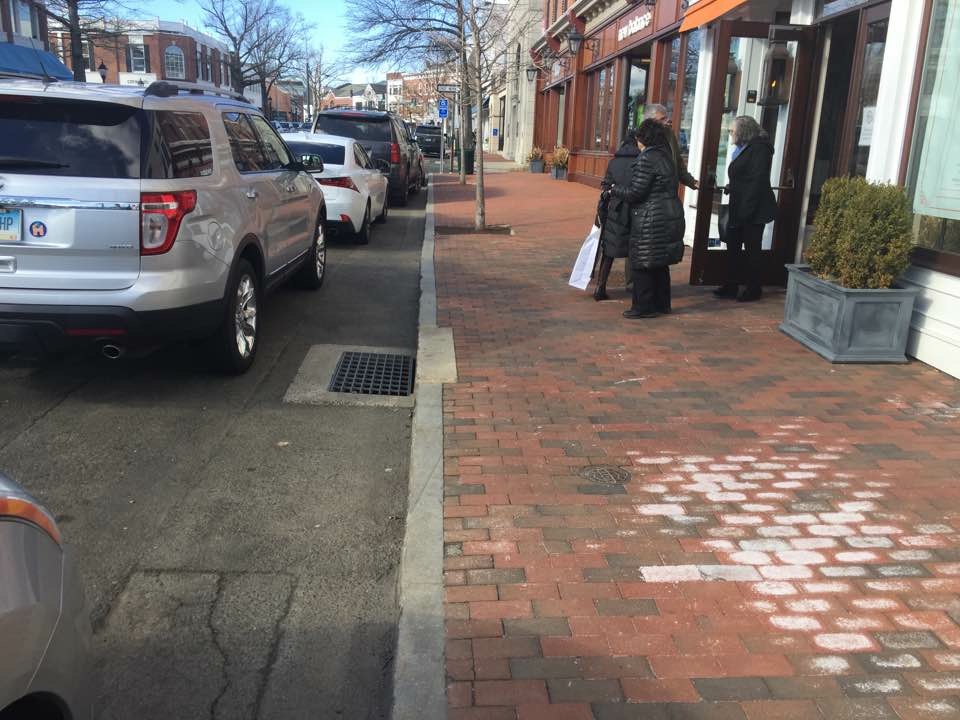 An example of parking too far from the sidewalk.

Officials last week voided a $25 ticket issued to a New Canaan man who parked more than 12 inches from the curb on Main Street downtown one morning this summer.

Joseph Somma told members of the Parking Commission during an appeal hearing that he’d been making a quick run from the New Canaan Field Club on the morning of June 24 (a Monday) to Baskin-Robbins to pick up ice cream for kids.

A resident of New Canaan for 16 years, Somma spotted one parking space in front of the popular ice cream shop, pulled into it with his new truck and “didn’t realize how bad I did park,” he told the Commission during the Sept. 4 hearing, held at Town Hall.

“I did park and I broke the rules. Honestly I did not realize there was a rule until after I got the ticket, OK? But I was really going in there because I had prepaid for the ice cream for the kids. I was trying to do it quickly… I have never got a ticket before, I have never been here. I don’t know how this all works, but I did not realize that it was that far off. I thought it was going to be a quick pick-up and leave to get the ice cream for the kids, so I’m asking for consideration.”

Somma said,“I realized after-the-fact that I did park poorly. I was out as she was giving the ticket, she said you can appeal it, I have already unfortunately given you the ticket. I talked to the lady. I was a little upset because I was in and out quick. But I understand. I will never do that again.”

Following brief deliberations, the Commission voted 4-1 to void the ticket.

Commissioner Peter Ogilvie noted that Somma has lived in town a long time without getting a ticket.

“Historically, we have looked at the history and we have granted waivers,” Ogilvie said. “One waiver. And If anyone deserves waiver I would suggest some guy delivering ice cream for the kids might qualify.”

When Commission Secretary Pam Crum noted that Somma’s offense was “not a major infraction,” Richey responded, “You don’t have to convince me, I am always going to vote to void.”

“I just think it’s consistent, there is no issue with signage or with anything else,” Hering said of his reasoning.