New Canaan resident Karen Miller, imperturbable superintendent of the town’s highly visible Parking Bureau and advocate for expansion of facilities for commuters, is retiring at the end of next month, she said. 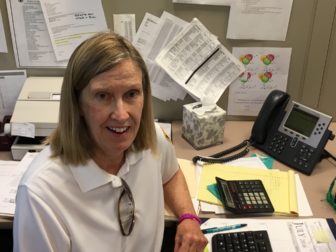 New Canaan Parking Bureau Superintendent Karen Miller is set to retire at the end of next month after 18 years. Credit: Michael Dinan

A New Canaanite since 1983 who has worked in the bureau for 18 years, Miller said major developments during her tenure include the acquisition of the Lumberyard Lot in 1999 and the introductions of both license plate readers for parking enforcement officers and the PayByPhone app for motorists.

“We have to help our commuters,” Miller told NewCanaanite.com Monday during an interview in her office at the New Canaan Police Department.

“Most of the people moving to town are in need of commuter parking because they work in New York City. It would be in the best interests of the town to give them a place to be, and we have the wherewithal to do that and we have all the support we need to do that and I think it’s time to stop talking about it and do it.”

A mother of two sons—Sam is living and working in New York City and Tom, after eight years with the U.S. Marines, including two stints in Afghanistan and one in Iraq, is pursuing a pre-med/physics degree at Columbia University—Miller took up her position in the Parking Bureau here as a second career. Prior to having kids, while living in Bronxville, N.Y., she had worked in production at Hearst Magazines (“House Beautiful”) in Manhattan, she said.

Miller, a Bryn Mawr, Pa. native who is consistently upbeat despite a job that requires interactions with motorists at their most vexed, said when asked what’s next for her, “I want to have some kind of new adventure.”

Asked what that might be, she said with a smile: “Well, let’s see. Maybe I could be a—what do they cal those people in the White House?—chief of staff. I always loved those people in ‘The West Wing.’ ‘”

Regardless of what she does in retirement, Miller will be sorely missed in the Parking Bureau, according to Stacy Miltenberg, for 13 years the administrative assistant there.

“I have enjoyed working with her these past 13 years,” Miltenberg said. “I think she’s a wonderful supervisor. I have gotten along with her so well. I am very sad to see her go.”

“Karen’s broad smile and friendly banter will be missed on the streets and parking lots of New Canaan,” Mallozzi said. “A tough role for sure, but Karen’s dedication and affection for our community always shined through.”

“In one of the ‘hottest seats’ in New Canaan she has stayed cool, collected and communicative,” Richey said. “Karen has been popular with merchants, residents, government officials, her staff, and every member of the Parking Commission throughout the years, despite the sometimes conflicting demands of the job.  I will miss her greatly and wish only the best for her and her family in the future.”

Tucker Murphy, who fields suggestions and complaints and otherwise deals with parking matters regularly as executive director of the New Canaan Chamber of Commerce, said that Miller has been rock-steady “any time we have ever needed anything from her.”

“She was the one who helped us get the free parking the day of the [Holiday] Stroll, the Village Fair [& Sidewalk Sale], and she always comes to me with those ideas first, which I love,” Murphy said. “It’s a thankless job, and she’s always done it with a smile. I really appreciate all that she’s done.”

Regarding the downtown, Miller said New Canaan will take a major step forward with respect to parking when PayByPhone is made available for smaller lots closer to the central business district.

“I think it’s a good time to re-evaluate the parking needs downtown,” Miller said. “The demand on-street is not quite as high as it has been in past years. But I think anything we can do to help get the employees off of Elm Street [is good]. Some creative thinking which is underway right now, some permits in some closer lots, a small number, I think that would help the situation.”

One thought on “‘Cool, Collected and Communicative’: Karen Miller, Longtime Head of New Canaan Parking, To Retire Next Month”