One of New Canaan’s most unique if somewhat unknown recreational facilities saw a steep rise in activity this summer, officials say. 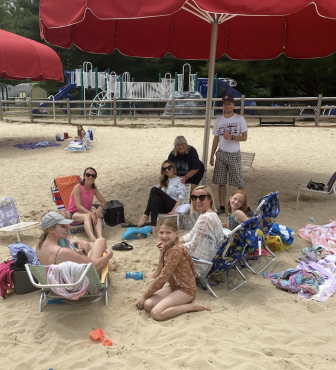 The figure is up 14% over last summer, Green said during the appointed body’s regular meeting, held Sept. 14 at Town Hall.

“It was a great summer for Kiwanis Park,” he said while presenting an update on the Old Norwalk Road park to the Commission.

Recreation officials noted in July that new residents of New Canaan are discovering Kiwanis and enjoying its beach, spring water-fed swimming hole, basketball courts and general freedom. The 14-acre park also includes a pavilion, facilities such as restrooms, a deck with picnic tables and play structures for kids.

Green noted that the one major item lacking at Kiwanis this past summer was “lack of a food truck and food service.”

“We all agree it needs it,” he said. “There’s no dispute there. One vendor was lined up for this summer, for 2022, but you have to have a LLC to be a vendor in New canaan parks and his vendor did not get the LLC in time because the state had a huge issuance backlog for LLC’s. But we’re hoping next year that will be solved.”

Parks & Recreation Director John Howe said the town had food trucks lined up for Kiwanis three times but it didn’t work out this year.

“The hard part is the traffic,” he said. “We looked at it and said it’s a lot of people, it’s very nice. They look at it and they don’t think it’s enough to be viable.”

During his update, Green spotlighted what he called the “mind-blowing” successful programs of New Canaan Library that brought nearly 150 adults to Kiwanis—many of whom commented later that they didn’t know about the hidden gem.

“I’ll just talk about one of their activities,” he said. “When [Recreation Supervisor] Steve Dayton some months ago at one of these meetings suggested we have the cardboard boat regatta, I thought in my own mind, mixing metaphors, ‘This is never going to fly.’ And it was just a great event. Only one boat sank immediately and it was terrific. And the library feels that this is going to be an even bigger event next year. There are high school kids who are interested.”

The New Canaan YMCA also held its 63rd year of Camp Y-Ki at the park, with 170 campers per session in four sessions throughout the summer. Comments from the Y included that Kiwanis “is a great space” and both the library and Y noted how attentive and professional the Recreation Department staff was.

“Seems like you made a lot of friends this summer,” Green told Recreation Department members at the meeting.