“One Book New Canaan”—that’s #OneBookNewCanaan on social media—is designed to “celebrate and promote reading,” Susan LaPerla, the library’s director of programming, said in a press release. 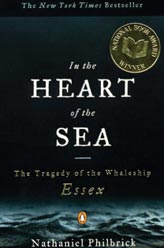 “In the Heart of the Sea” by Nathaniel Philbrick. Contributed photo

The book? “In the Heart of the Sea: The Tragedy of the Whaleship Essex” by Nathaniel Philbrick, a nonfiction account of the whaler that helped inspire Herman Melville’s “Moby Dick.”

“Students at Saxe Middle [School] and [New Canaan High School] will also read the book, and many New Canaan book groups plan to read it as well,” LaPerla’s release said. “There will be discussions of the book at various New Canaan locations throughout the next eight weeks.”

Philbrick himself is coming to New Canaan to speak about the book at 7 p.m. on April 4. Registration will be required and will become available via the library’s website.

Here’s some more information about “In the Heart of the Sea” and, see here how the library has gotten behind this effort by bringing in plenty of copies for local borrowers.