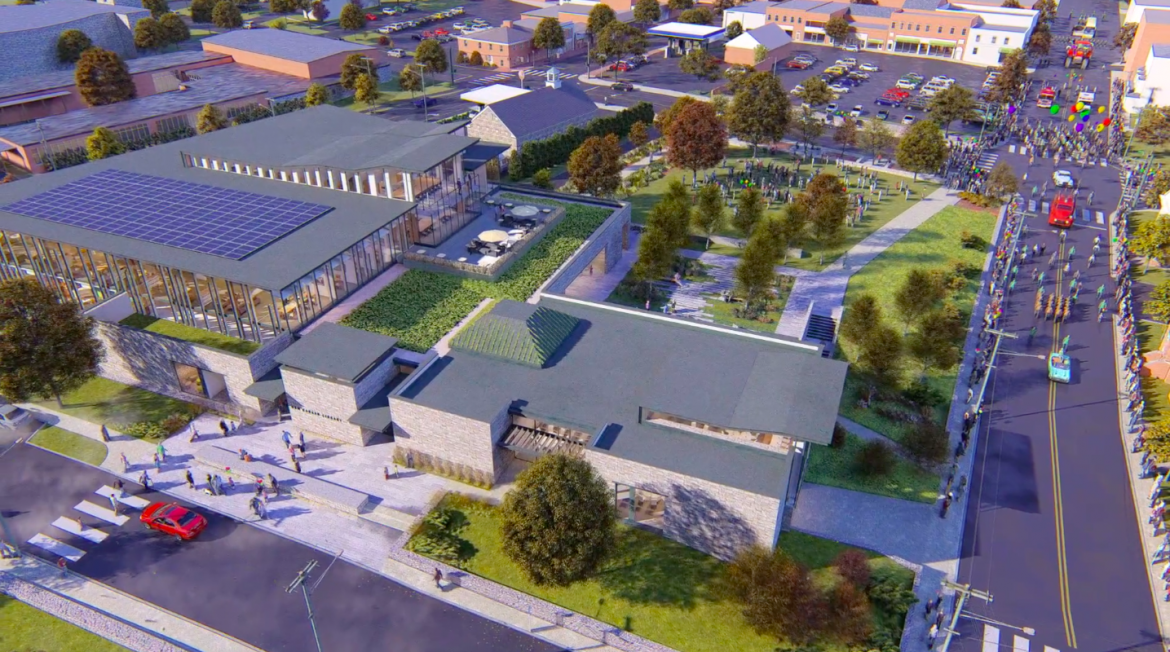 The timetable for municipal approvals of the widely anticipated New Canaan Library rebuilding project has been pushed back a bit pending details around parking and specifics of financials, the town’s highest elected official said this week.

First Selectman Kevin Moynihan said Tuesday that he had anticipated the library coming to the Board of Finance this week “with further financial information, but they are waiting for pricing estimates on their project.”

“The Board of Finance has made clear that they want much more specific numbers before they can move forward,” Moynihan said during a regular meeting of the Selectmen’s Advisory Committee on Buildings and Infrastructure, held via videoconference. “The Town Council has made clear that they want to see what is going to Planning & Zoning, which now has slipped a bit to the end of November, apparently.”

The multifamily dwelling at 48 South Ave. has been demolished as part of New Canaan Library’s rebuilding plan.

The $36 million rebuilding of New Canaan Library is still expected to commence next spring and construction will continue for about two years, the library’s executive director, Lisa Oldham, confirmed when asked about the project. Under a draft Memorandum of Understanding or ‘MOU’ with the town that’s been under negotiation since early this year, the town is to contribute $10 million toward the project while the library bears the balance of the cost through its own fundraising and a $15 million commercial construction loan from Bankwell, documents show.

Moynihan said that parking is among the key pieces of the MOU.

“P&Z will define what their parking requirement is,” he said. “They have not done that yet, and the fact that there is an adjacent, inefficient Center School parking lot is the subject of discussion right now and also the I don’t now how the 1913 building is going to get resolved but it must get resolved by the time the Town Council finally votes in probably December or January, February.”

The comments came in response to a question from Kimberly Norton, a guest at the meeting and member of a preservation group opposed to the library’s plan, which calls for a town green overlooking the corner of Cherry and Main Streets, including where the original 1913 library building stands.

Asked about the parking plan for the new library, Oldham said a traffic engineer hired by the library found that the original idea of creating underground parking was judged to be a poor option because it would create traffic problems. As a result, she said, the library commissioned further study and has been presented with eight options for parking. The library’s review of those options, with P&Z, is still underway, she said.

Regarding the more specific information requested of the library, Oldham said the transition from schematic design to design development has “just taken longer because there was a lot of work to do at the end of the schematic design.”

“Better to get it right than to do it fast,” she said.

Though Moynihan said the question of the 1913 library building still must be resolved, that matter has been addressed before both town funding bodies by the library.

In February, the Town Council by a 10-2 vote rejected a motion that would have effectively halted the library’s project for one year so that preservationists could figure out a use for the original building and fundraise for its restoration and maintenance.

Oldham said that library officials met last week with Norton and that, during the meeting, the president of the library’s Board of Trustees, Bob Butman, reiterated that the 1913 building is not part of the rebuilding plans and that if any person or entity wants to work with the library to move the structure to a new location, the organization will work with that person or group.

In addition to gaining approval from the town funding bodies, the library must go before the P&Z with its site plan and likely obtain a special permit.

4 thoughts on “Library: Rebuilding Project on Track for Spring As Parking Plan, Schematic Design Get Finalized ”