The art of filmmaking resonated with Adam Leibowitz at an early age—during a time when he and his family were living in New Canaan.

One family member Leibowitz credits that feeling to is his father Dennis. There were numerous occasions at their home on Turtle Back Road when the elder Leibowitz would have his son watch movies with him—not just the recent releases but the timeless classics, too.

“My dad definitely got me interested in older films, especially Alfred Hitchcock’s,” Leibowitz recalled on a recent afternoon. “I remember going to a screening in New York City of a restored version of Hitchcock’s ‘Vertigo’ with him, and I think that was one of the first times I became aware of filmmaking as an art form and could be something I could aspire to do with my life.” 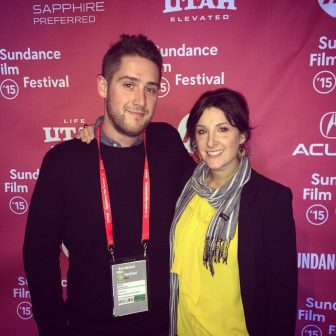 Adam Leibowitz with his sister Catherine Cottingham at the 2015 Sundance Film Festival for the premiere of the documentary “Most Likely to Succeed”. Contributed: Adam Leibowitz

After making films on his own as a teen at boarding school, Leibowitz—an alumnus of New Canaan Country School—found that his passion for film further intensified while at Emerson College in Boston, where he majored in film.

“Emerson is a great school for those interested in film,” Leibowitz said. “A lot of other programs make their students, for the first couple years, take several courses centered on film theory rather than have them make movies right from the start. At Emerson, while we did take theory courses, you’re also making movies, basically, right from the start of freshmen year, which was great. It’s very focused on actually doing the work necessary to learn the craft of filmmaking.”

And Leibowitz is a firm believer that there is no better substitute for learning the art form than doing the work yourself and recognizing the mistakes you make—that one must “get the bad films out of the way early” because nobody makes a masterpiece on their first try. One must understand that making a film is a process and is one you have to go through and be willing to fail at multiple times in order to, eventually, become capable of making the project everyone will be talking about.

And it is that determination and willingness to fail that helped Leibowitz launch the career he’s in today: documentary filmmaking.

His most recent work is as a producer on the Netflix series “Last Chance U”—a series that chronicles the season of a junior-college football team largely comprised of student-athletes whose primary goal is to have their play on the field get them to the grander stadiums they either always dreamed of or once had in their grasp but lost.

The idea for the series originated from Drew Jubera’s October 2014 article of the same name in GQ. That article detailed the journeys of several student-athletes, including Chad Kelly, the nephew of former Buffalo Bills quarterback and Pro Football Hall of Famer Jim Kelly, playing for the juggernaut East Mississippi Community College football team—the subject of the series’ first two seasons.

The show’s director and executive producer, Greg Whiteley, got wind of that article and after he met with Condé Nast Inc., who owns GQ, to gain the rights to the story, and later met with the production company Endgame Entertainment, the process of turning the article’s concept into a TV show was off and running. 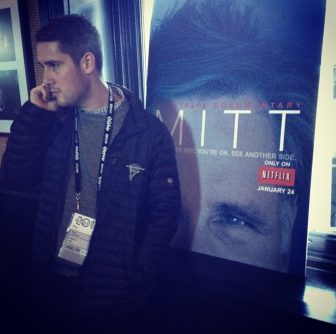 Whiteley’s played a prominent role in Leibowitz’s career. “Last Chance U” is the third project of Whiteley’s that Leibowitz has worked on in the past 10 years—the prior two being “Mitt” and “Most Likely to Succeed.” “Mitt” is the Netflix documentary that provides an in-depth look at Mitt Romney and his sizable family on the campaign trail for the 2012 U.S. presidential election. And “Most Likely to Succeed” is a 2015 documentary that, according to its website, “reveals the growing shortcomings of conventional education methods in today’s innovative world,” which played at that year’s Sundance Film Festival and became available on iTunes in August.

Leibowitz, in fact, credits Whiteley for giving him his own version of a second chance for his career. After working for years at a couple different companies that had him “at the bottom of a ladder that I didn’t want to get to the top of,” Leibowitz left and chose to pursue an internship with a production company called Spitfire Pictures.

“I’m not certain they [Spitfire Pictures] even exist anymore,” Leibowitz said with a smile. “But they had a documentary division at the time and I’d decided that was the type of filmmaking I wanted to pursue, so I went for it. Taking that risk led me to meeting Greg Whiteley, which made my entire career.”

Leibowitz’s role on “Last Chance U,” which was nominated for Outstanding Serialized Sports Documentary at 2018’s Sports Emmy Awards, is as a member of a team of editors and producers in Los Angeles who catalog the thousands of hours of footage the production team out on location sends.

“We work together to put all that footage into a comprehensive, coherent, entertaining season that has an arc to it. Unlike reality shows, such as the ‘Real Housewives’ franchise, which do a lot of their story producing as they shoot it, documentary filmmaking is more of a shoot whatever you feel is interesting and then come back to it and try and make it a finished product. So, I help and supervise the team in L.A. as they go through the footage we have and make a compelling season out of that.” 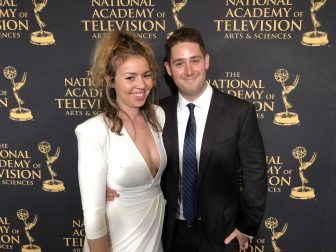 Leibowitz lives in Los Angeles with his wife, Julia Beecher-Flad. And while his work with the show doesn’t yield him much free time, he does make it back to New Canaan once or twice a year to visit with his family members who are still in town, including his mother, Judy Cunningham, who lives on Park Street, his sister Julia, who lives with her husband, Doug Stewart, co-owner of town stalwart Walter Stewart’s Market, and their children, Audrey, Griffin and Scarlett.

And it’s because of where Leibowitz grew up that a show like “Last Chance U” has resonated with him so much.

“Being a part of documentaries is very fulfilling for me because it just allows you to gain perspective on life and the world we live in. I’m from Fairfield County. The people we’ve shown in the three seasons thus far of ‘Last Chance U’ are ones who come from a very different part of the country and have grown up in very different circumstances. It’s valuable to empathize and understand those who are different from you and learn about where they come from and I believe that’s what makes our show unique to others. Other sports shows, I feel, show people who, granted, might have come from humble beginnings, but are now world-class athletes and very far removed from them. Looking at the footage I do for our show, even from a computer screen, has changed me as a person.”

Earlier in August, Netflix announced that “Last Chance U” has been renewed for a fourth season, set to air during summer 2019. So, while Leibowitz’s immediate future will include another go-round with the football team at Independence Community College of Independence, Kan.—the subject of the show’s third season—he knows that, like all shows, the series won’t last forever.

So, what are his hopes for the next project that comes down the line?

“That it’s something as good and rewarding as ‘Last Chance U’ has been for me. The diversity of the different ‘characters’ and thematic elements that make the show interesting would be great to have happen again on the next project. It’d be cool if it’s not something sports-related simply to try something different. But I hope we can continue to make more documentary series like this one.”