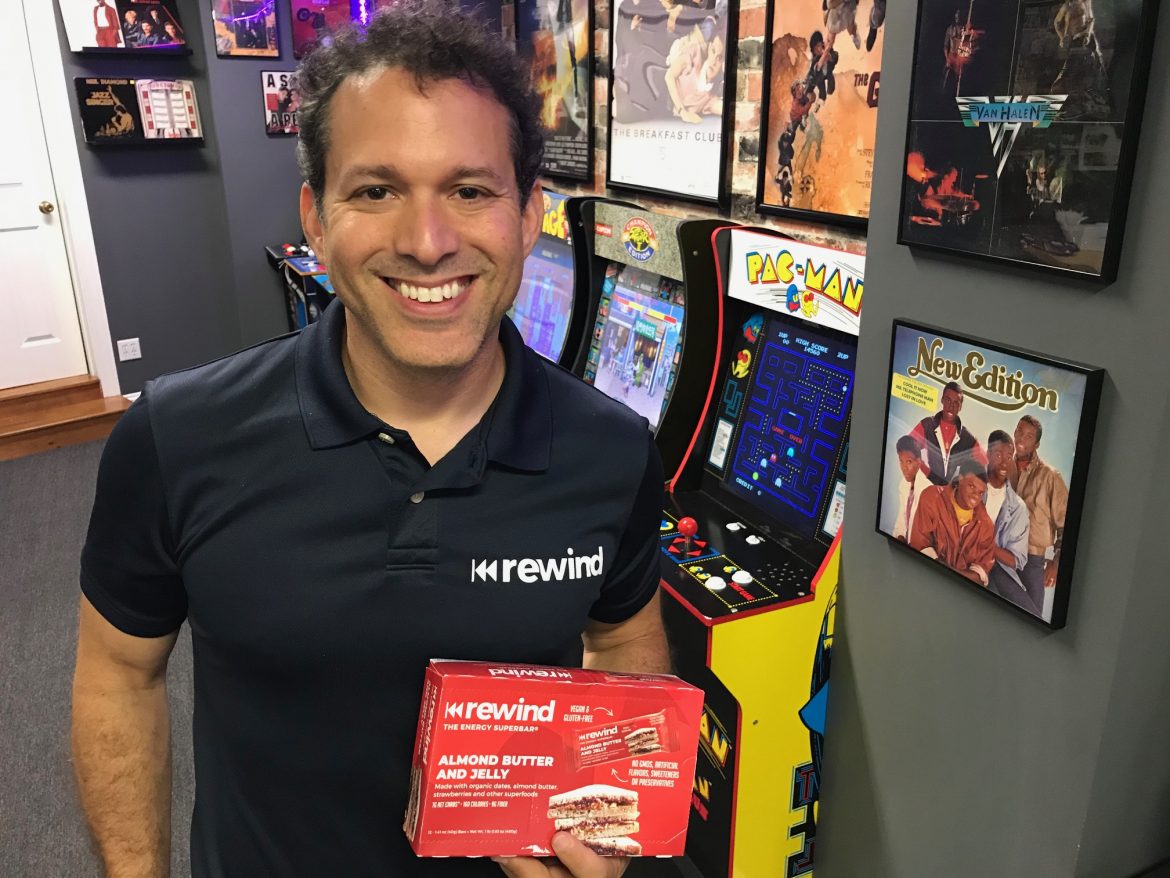 New Canaan's Ryan Lee with a box of the Rewind-brand energy bars he created, in his office downtown. Credit: Michael Dinan

A career entrepreneur, Ryan Lee hit on his latest business idea about two years ago, toward the end of a period of declining health.

It had started 10 years before, after Lee and his wife had their fourth child and he started gaining weight. His mother died the following year and then he was diagnosed with an auto-immune disorder.

While on vacation in 2017, Lee found that none of his clothes fit. HIs joints hurt, he could hardly walk, and his auto-immune flared up.

“I said, ‘I have to make a change,’ ” Lee recalled on a recent morning from the Main Street offices of the energy bar company he founded.

“My blood pressure was starting to get high and I got scared. I said that I wanted to simplify my life, simplify my diet. Let me just have a bar every morning. That was it. And I started having a bar every morning, but I couldn’t find a really good one. It still started to work—i started to lose weight and feel better—but all of them had a lot of sugar or dairy. So they still weren’t perfect.”

So Rewind energy bars was born.

Vegan, gluten-free and non-GMO with no artificial favors (now including Almond Butter and Jelly, a popular choice), the energy bars are purchased by consumers through Rewind’s website each month by the tens of thousands.

The locally based company recently marked one year and Lee called its growth “amazing.”

“Even better than I thought it would be,” he told NewCanaanite.com. “The biggest challenge with a company like this, with physical products, is inventory and cash-flow. Because the bars take a while to manufacture. So we need to stay at least three months ahead. And what has happened because we are growing so fast, we keep running out of bars.”

Lee calls that problem both “good and bad.”

A Rockland County, N.Y. native and graduate of Ithaca College, where he earned a bachelor’s degree in recreational therapy, Lee worked for six years in a children’s hospital in play therapy—sports, adapted aquatics, fitness—while working toward a master’s degree at night in exercise physiology from Long Island University.

He’d started two supplement companies in the past, selling both, and has also taught entrepreneurship (primarily online). After conceiving of Rewind, he contacted dozens of bar manufacturers and began sampling until he found the right company and product. He had two part-timers to start, including one dedicated to fulfillment, which Rewind had handled itself through a Wilton space used for shipping. The company now has three full-timers, including him, and others who help do so on a contracted basis.

“I want to help as many people as possible live a better life,” he said. “I want to make a dent. And I want to have a business that my children can be proud of, they come here, they help, they love being part of this.”