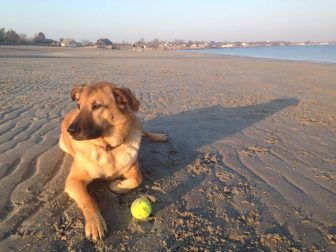 In addition to his parents, he is survived by brothers Marvin and Dexter. He was predeceased by Wilbur and Russell.

Born around August 2009 and rescued in Lynchburg, Va., he came to us within weeks of buying our house in Stamford. Marie said that she wanted a third dog, a large-breed, long-haired male rescue and that he would be named ‘Louis.’

On Saturday Nov. 7, I set out before dawn to a PawSafe adoption event in New Milford. There, a litter of 10-week-old shepherd-Chow Chow mix puppies roughhoused noisily in a makeshift corral. Except for one they’d named ‘Kason’ who sat apart, staring up at me.

He came home that morning, Marie’s 36th birthday. She stepped out onto the deck and they met in the yard. Expressive, watchful, sensitive and sweet, he would become her steady companion—crying when he sensed her return from work, no matter how late, nestling in with her in the evening on the living room sofa, seeking her out during storms and sleeping each night curled into her legs.

Louis spent much of his rambunctious puppyhood charging through the woods of Mianus River Park in Stamford, the Babcock Property in Greenwich, Lake Mohegan in Fairfield and, during the winter, the beach at Tod’s Point. He waded into water but rarely swam. He once scratched his cornea romping at Mianus, the lone medical event of his life.

He was a dainty eater who loved cheese. He counter-surfed through his prime. Once, we heard a man yell near the buffet table during a large outdoor gathering at our friends Marisa and Jay’s farm in Newtown. Louis stood nearby. The man pointed down and said, “He ate the potato salad.”

He was fastidiously clean. He loved butt pets. He had a widow’s peak, thick mane, purple tongue and floppy ears that windmilled when he ran. Once, a boy at Greenwich Point pointed at Lou as he galloped past and said, “Look at the airplane ears.”

One time Louis wandered off as a puppy during a hike at Woodland Park in Darien. Soon we heard a high-pitched whine that we followed to find Lou standing against a wall of piled stone, his forearm stuck. He would issue the same Chewbacca call at home, faintly, when he wanted attention or to be let back inside the house. He howled with Marv when a siren sounded.

He disliked crowds and left the room at the sound of raised voices or the f-word. His ears pulled back flat when he was nervous. When Wilbur died, Louis disappeared for several days into the basement laundry room, wedged beside the dryer. He also went there when it thundered.

He refused to occupy “his” living room armchair or sofa if there was even a stray hair on his accustomed spot. Instead he stared at us, whining until the obstacle was removed. He learned how to give “kisses” in his middle years, running forward so that his nose and mouth collided with the face of his intended in a kind of wet head-butt. In his senior years, he learned how to play from Dex. He worshipped Russ and a Rhodesian Ridgeback named ‘Ari’ that we sometimes ran into at Mianus and the Point. His best friend for years was Alfie. He was beloved by Aunt Roisin, Nana Mary, Grandpa George, Grammy Shel, Aunt Jacky and Uncle Eric, Kit, Brian, Jason, Liliana and Marty.

He stalked neighborhood cats and killed wild rabbits. He was wary of strangers. He bit two plumbers. Our friend Federico once let himself through the backyard gate to drop off a power washer and Louis bit his leg. Another time, a neighbor told us that Louis got her after she’d let herself in the gate to borrow a rake. “He bit my bottom,” she told us.

He was the alpha of our pack. When we let the dogs out, no matter where Louis was in the house, the others waited for him to pass and descend first into the yard.

He traveled as far as north as Maine and in 2016 vacationed in Myrtle Beach, S.C.