New Canaan traffic officials said Tuesday that they received a request from a Louise’s Lane man to remove the apostrophe-S from the street’s name and sign. 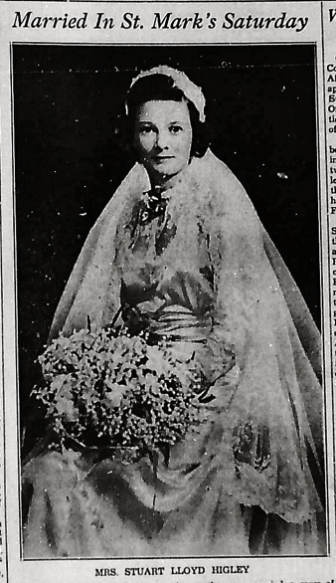 Louise Warren Higley in her wedding notice from 1942. She would pass away six years later, at age 31.

The resident also asked whether a more decorative sign than the standard white-lettering-on-green could be installed at the head of the short, dead-end lane that runs south off of upper Oenoke Ridge Road, according to Police Capt. John DiFederico.

“He has two requests—one was to change the name to just ‘Louise Lane,’ and the other was to change the street sign itself to make it more decorative and appealing,” DiFederico said at a meeting of the Traffic Calming Work Group, an administrative team of police, public works, emergency management and fire officials that fields such requests.

One of the reasons that New Canaan would be careful about pursuing any change to a street name—even one of punctuation—is that the names themselves have been carefully selected (see a full database here of the history of New Canaan street names). 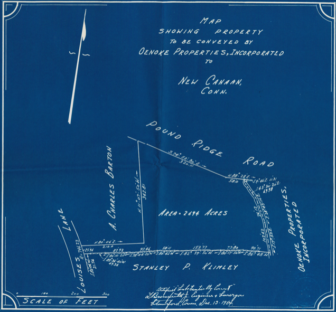 In the case of Louise’s Lane, according to a 1960 annual of the New Canaan Historical Society, the street “was laid out in 1950 and named for the late Louise Warren Higley.”

A look through the files at the New Canaan Historical Society shows that Higley was the wife of the ultra-prominent and influential Stuart Higley, of Brotherhood & Higley renown, and was a woman who died at a rather young age after marrying into a New Canaan family when she was 29.

Born Louise Wadsworth Warren on Dec. 13, 1916, she was the daughter of Northam and Edna L O’Brien Warren, according to the historical society. She attended the Ethel Walker School in Simsbury, Conn., and then graduated from Smith College in 1939. Louise married Stuart Higley at St. Mark’s Church three years later, in 1942, and her marriage notice in the New Canaan Advertiser that year includes this note: “The bride wore the dress in which her mother was married, a gown of white satin with rose point yoke and sleeves, and a coronet veil of tulle and rose point.” 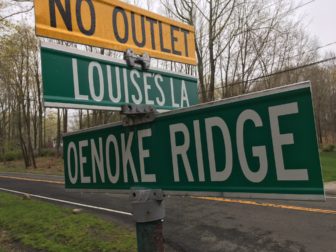 The sign at the start of Louise’s Lane. Credit: Michael Dinan

The couple in 1945 purchased for $17,000 a stately, 1900-built Colonial on West Road (that still stands), according to land records on file at the historical society.

Louise Warren Higley died just six years after the pair were married, on June 7, 1948. Three days later, an obituary ran in the paper which said she passed away at home following a short illness.

“She was well known in New Canaan and Stamford and had many friends in both communities,” it said.

“She was a member of the Stamford Junior League and treasurer of her college class after graduation. In addition to her husband, she is survived by two young daughters, Louisa and Nancy.”

The street name that bears her name likely will go unchanged. Though the New Canaan Police Commission does have the power to authorize a change to public street name signs, the governing document from the state DOT would require that all such signs in New Canaan then follow suit, meaning each would be required to change, according to DPW Assistant Director Tiger Mann.

Mann said he spoke to the Louise’s Lane resident who made the request of the town, and explained that some private roads, such as Wahackme Lane, do have differently configured street signs, but that’s because they’re not public.

The colors of the signs must be consistent across the entire town, Mann said, though some municipalities do allow variations for things like historic districts.

The work group agreed to recommend no change be made to the Louise’s Lane sign to the Police Commission, which next meets May 18.