Mary Ellen Rogers Smith died at her home in Red Hook, NY in the predawn hours of March 23, 2021. In the waning days of her long struggle with several chronic conditions, Mary was surrounded by her beloved family and friends, who came from far and wide to bid her farewell. 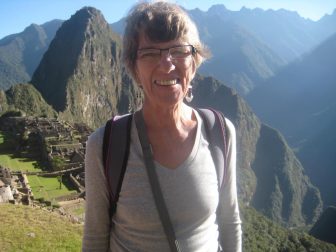 Mary R. Smith. Photo published with permission from its owner

Mary Ellen Rogers was born on June 3, 1940 in Bremerton, WA and raised on the Kitsap Peninsula overlooking Puget Sound. Always a shining student, it was no surprise that Mary made her career in education. After her undergraduate training at Pacific Lutheran University (PLU), Mary learned her trade as a secondary level English teacher in classrooms around the globe. After graduating from PLU, Mary and her new husband, David A. Smith (Married June 9, 1962) joined the second group of United States Peace Corps volunteers in 1963 and was dispatched to teach young women in a newly independent Nigeria at Queens’ School in the town of Enugu.

Upon returning from the Peace Corps, Mary devoted her career to public education in Connecticut, where she made a home with her husband, and two daughters, Annie and Sarah Smith. Mary taught high school English in Connecticut, beginning in the early 1970s at Coginchaug Regional High School in Durham, CT and rounding out her career at New Canaan High School in New Canaan Connecticut, where she was a member of the faculty for 30 years. She retired in 2007 as chairperson of the English Department, but was also well known for her contributions to NCHS Administration and Theater Departments as a trainer of teachers and a director of student plays.

Mary was remarkable for her ability to live her passions, which included theater, music and language. She was an accomplished poet and writer, and enjoyed live music and theater to the fullest, especially in her retirement years in New York City. Mary loved to travel and to engage new people and ideas and cultures. Whether on the barstool over dinner at her local watering hole or on a hike up Machu Pichu, Mary always found a way to be enthralled by the people and places and ideas she encountered.

Her laugh best captured the wonder and joy that Mary experienced as she engaged the world. Though it was seldom heard in her last days, Mary’s spirit remained strong until the end. Her family is so grateful that her long struggle with illness has ended and that she is at rest, as was her wish, in the beauty of nature that surrounded her in her final days at her home.

She is survived by her two daughters, Annie and Sarah Smith, her grandson Bruno Liddell, her dear friend Siobhan Liddell and her sister, Cathy Rogers, of Seattle.

There will be no funeral services. The family will be planning a celebration of life for Mary later this year.

Those who wish to remember Mary can make a donation to their favorite charity in her honor.