It looks to be something out of ancient Greece or Rome or even the Old South rather than New Canaan. The colonnade that sits amid the Mead Park tennis courts on a perch overlooking Mead Pond serves no other function these days than as a picturesque background for pre-prom or family photos. A relic of some bygone era, many patrons of the park pass it by every day, oblivious to its significance.

So what exactly was it for? 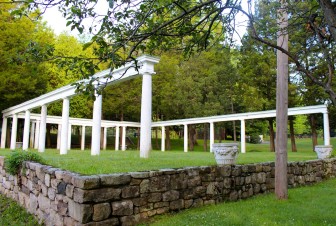 The history of the colonnade dates back to the Great Depression, which according to the New Canaan Historical Society’s publication Landmarks of New Canaan, was actually a period of substantial growth for Mead Park. Federal relief agencies–the WPA, in particular–were very active at the time in New Canaan. At that time Mead Park was not too far removed from its former status as a gravel pit/cranberry bog, consisting only of a poorly drained athletic field, one tennis court and a small skating pond. It was a fertile area for development. 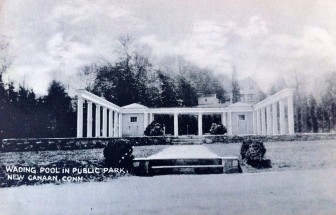 An old postcard of the wading pool at the colonnade (Contributed).

A combination of federal and civic funds went into a major overhaul of the park, which included access sidewalks on Park and Richmond Hill Roads, the gothic iron arch at the entrance of the park, dredging and landscaping of the pond, the revamping of the baseball field, additional tennis courts, a pumping station, a bandstand and–last, but not least–a children’s wading pool surrounded by a colonnade, courtesy of New Canaan resident Abraham Hatfield.

“At the end of the colonnade there were two bathhouses,” New Canaan Recreation Director Steve Benko told NewCanaanite.com. “They anchored each corner in the back. They were stucco buildings with a copper roof.” 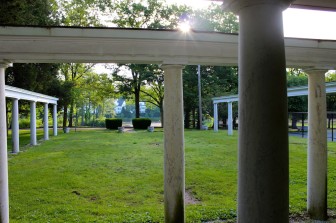 It might be difficult to imagine a pool in that small area, no bigger than any of the tennis courts currently surrounding it. This holds especially true when one considers the majestic Waveny Pool residents (and some non-residents) enjoy today. That being said, it serves as a comparative time capsule of sorts. In Depression-era New Canaan, the pool must have been a welcome relief from reality for many New Canaan families in the 1930s and ’40s. It was such a distinctive landmark of the park that WPA paintings focused on two areas of Mead–the baseball field and the wading pool.

According to Benko, during World War II, the wading pool was filled in and converted into a victory garden. It was never converted back, rendering the bathhouses useless.

“They were vandalized so eventually they took those down,” Benko said.

Still, town officials were able to utilize the area for many town events, most notably the big Labor Day tennis tournaments which used to highlight the end of summer. 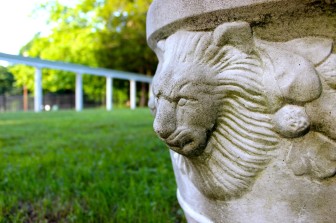 When schools began opening prior to Labor Day in the 1990s the Mead Park tennis tournaments died out, bringing some uncertainty to the colonnade’s future. Before the latest major renovation of the park – the creation of the Mead Park Lodge – there was some talk of moving the snack bar to the colonnade area. The plan was scrapped in favor of the current location, closer to the little league fields. The area is now largely disused, with several empty planters adorned with lion faces seemingly waiting for some new purpose. There was even some recent discussion to do away with the columns altogether.

“There was a plan to redo the baseball fields and they would have been eliminated,” Benko continued. “It’s kind of a crime. They’re part of the park, part of history.”

One thought on “Mead Park Mystery: The Colonnade”