On a humid recent morning, NewCanaanite.com sat down with newly hired Lateral Firefighter Damien Sheerin inside the New Canaan Firehouse after his return from a call in New Canaan. 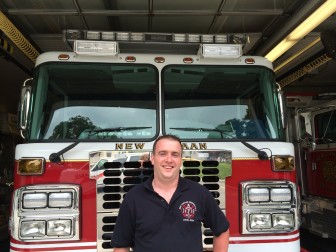 New Canaan may seem a long way from Sheerin’s hometown of Foreglen, Northern Ireland, located in the northernmost county (Derry) of Northern Ireland, but Sheerin says that he is driven to learn as much as he can and build a living for himself in his new country.

Having left his school in Northern Ireland at the age of only 16 to pursue work as a carpenter of sheet rock and metal framing, Sheerin came to the United States in January of 2006 to work as a construction worker and bartender in Queens, N.Y.

Through his move to Connecticut after earning his EMS to become an EMT, and eventual joining of a volunteer fire fighting force and Danbury Ambulance, he met his future wife and the two of them now live together in Ridgefield. The couple also have two children: a 16-month-old daughter named Lylah and a 7-week-old son named Dylan. 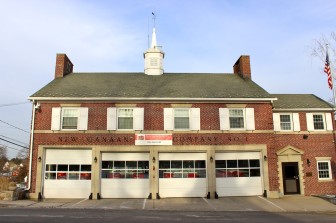 While he hadn’t been on the job for a full week at the time we met, Damien said he’s keen on taking in as much information about the firefighting occupation and hopes to one day pass what he learns onto future generations of firefighters. “I look forward to learning all there is about being a firefighter, to take care of the public, help people, and become a well-rounded firefighter and hopefully down the line help teach the kids like me to become real good firefighters” Sheerin said. “I want to learn from the best and pass it on.”