One person was transported to Norwalk Hospital with minor injuries following a two-car accident Saturday at the intersection of Silvermine Road and Carter Street. 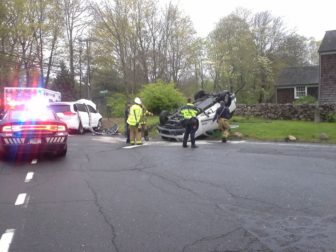 At about 6:12 p.m., firefighters, police and EMTs responded to the scene of an accident that included a rollover onto the corner out front of 4 Carter Street.

It wasn’t clear what caused the accident—spokespeople for the fire and police departments were not immediately available—though the intersection there with its limited sightlines has been on the radar of local traffic officials for years.

Officials with a work group that addresses traffic-calming matters have sought to increase the “skew angles” of the two town roads, so that instead of shooting straight across Silvermine Road, motorists coming from Carter would make a right onto 106 and then queue up to make a left onto Canoe Hill.

Though state officials have said they support the plan (Route 106 is a state road), they also have called for a traffic engineering study to ensure that the change would create no traffic problems.

Last month, during a discussion of the intersection within the Traffic Calming Work Group, officials said that the state had talked about putting off installation of traffic flashing-light beacons there until a study gets done.

6 thoughts on “Minor Injuries After Collision, Rollover on Silvermine Road”