New Canaan High School Rams fans soon will have the ability to watch significantly more sports contests online, as district officials work with the broadcast arm of an Indianapolis-based organization that helps develop standards and rules for interscholastic activities nationwide. 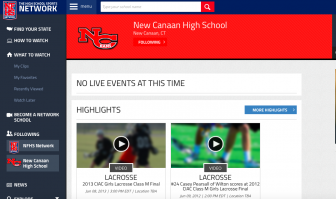 Starting no later than this fall, some 200 games and matches at Dunning Stadium and the NCHS gym will be streamed live, according to Athletic Director Jay Egan, through the High School Sports Network, a service of the National Federation of State High School Associations.

“I think it’s an expectation that our parents have that this is a service we can provide for them and I think people are really excited thinking about being able to do this,” Egan told members of the Board of Education during their regular meeting, held Monday night in the Wagner Room at NCHS. 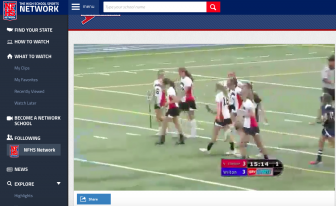 The service costs user a fee in the range of $25 to $50 per year, and involves installing camera equipment at the NCHS facilities, Egan said. The approximately $6,500 it costs to get up and running is being paid for by the Booster Club, he said.

The coverage will complement and expand about 55 to 60 games already streamed online each year through an excellent student-operated NCTV 78 YouTube channel. Fairfield Ludlowe and Shelton High Schools already use the service, Egan said, and Greenwich High School is launching it soon.

New Canaan is “toward the front as far as getting this technology going,” he said.

Though the stream itself uses multiple cameras to provide seamless on-field (or court) coverage, it does not include sound, Egan said. It’s possible to overlay audio, however, and that conceivably could be overseen by students in the broadcasting program, he said.

In working with the High School Sports Network, the district essentially tailors its own menu for a website that registered users log into to view games live.

Egan’s comments came during a wide-ranging presentation on athletics at NCHS. In it, he spotlighted coaches and teams, and provided an overview for Athletic Department initiatives that also include using an online coach evaluation system and creating a shared database for coaches.

Board of Ed Secretary Jennifer Richardson said she was especially excited about the live streaming, and asked whether Conner Field could be included so that soccer enthusiasts including those in the New Canaan Soccer Association could watch.

The Association is “super interested” in having games streamed, Richardson said.

“I was wondering about soccer because they are asking about that,” she said.

Egan noted that under a new schedule, half of NCHS soccer games will played at Dunning Stadium, so all of those will be streamed, and that it isn’t clear just now how Conner would be included.

“We would have to build a stand,” he said.

Asked after the meeting about the new turf fields or track, Egan said the sports complex is a logical next place to bring the streaming though next year will be seen as a pilot of sorts and district officials will know better then how to expand the rollout.

Superintendent of Schools Dr. Bryan Luizzi said he already has had a positive experience with the system as an end-user, as he was able to watch his own niece play in a state championship basketball game online while he was in Jordan.