Saying a new two-family home would bring excessive traffic to their short residential street and that an application to allow for such is without merit and makes no accommodation for parking, neighbors of a vacant .36-acre parcel on Raymond Street at a recent meeting voiced concerns to town officials. 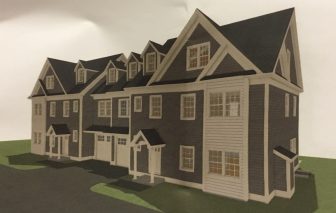 The two-family home that the owners of a Raymond Street property had hoped to build there.

Under the New Canaan Zoning Regulations, a property in the B Residential Zone must have a lot diameter of at least 100 feet in order for its owner to apply for a special permit to build a two-family home on it (see page 42 here). Yet the lot in question is 87.8 feet wide, according to an application for a variance from its owners—a company whose principals are Marcin Pyda, Marta Yaniv and Viktor Lahodyuk, according to records on file with the Connecticut Secretary of the State.

Saying he would welcome a single-family home on the lot, William Wartinbee, an immediate neighbor with four kids, urged members of the Zoning Board of Appeals at their most recent meeting to deny the application to build a two-family home there. 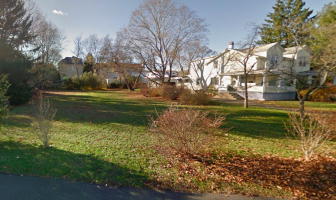 “The hardship claim for this property does not have any merit,” Wartinbee said during the ZBA’s April 2 meeting, held at Town Hall.

The property’s owners should’ve known when they bought in February (for $790,000) that the zoning regulation upped the lot width requirement in 1975 from 75 to 100 feet in the zone, he said.

“Raymond Street is small quiet side street in town with a dead end that leads into our driveway that connects down to Hoyt Street,” Wartinbee said.

He added: “The regulation was changed in 1975 to prevent streets such as ours from overcrowding and excessive traffic. Approving a variance to build large, two-family home on too small of a lot will markedly shift the character of the street. It will also lead to excessive traffic that often uses our driveway as a shortcut to Hoyt Street which is a danger to children who often play in our driveway.”

ZBA members noted that an even larger single-family home could be built on the lot if the owners so wished, though they did not immediately make a decision on the application (available here in the dropdown). The matter was continued to the board’s May 7 meeting, to be held at 7 p.m. in Town Hall.

Multiple other neighbors on Raymond, Hoyt and East Maple Streets also lodged objections with the ZBA, saying they purchased their own homes knowing that the vacant lot could not accommodate another two-family home, that such a house would negatively affect property values, that Raymond Street is already overly congested, especially after it snows, and that the site plan as sketched would mean even more cars would be parked on the roadway itself.

Pyda made a largely emotional appeal, thanking his neighbors for their feedback and telling the ZBA that he had met them. Some of those in the neighborhood who supported his application for a variance didn’t attend the hearing, Pyda said.

“Obviously I understand the concerns of the neighbors,” he said. “But again our intention from the beginning obviously it was a lack of full information and our intention was to build a house for ourselves and based on our research that we have been doing for the last two years, it is not as easy as we thought to buy a property in the town where actually you are willing to spend most of your life, raise your children, send them to good schools. Based on all the stories we hear on TV and other cities all over, you are looking for a house that is going to be in a neighborhood that is safe for you, your family and your children. That is how I grew up. I came from a foreign country, Poland, and I grew up on a farm. And we knew all the neighbors. We helped each other. That was a totally different thing, when I was a kid. There was no borders, there was no fences. You could go anywhere. And that is what we have been looking for, for such a long time.”

The zoning board noted that it appeared a second variance was needed because the property, according to a survey supplied by the applicant, did not have 100 feet of frontage to the street. Though it appeared that the lot had just about 80 feet fronting the street, Pyda said he was advised—by John O’Brien, a surveyor with New Canaan-based Moody & O’Brien LLC—that the only variance needed had to do with lot width.

Specifically, according to Pyda and Steve Stevens of Bridgeport-based Atlantic Consulting & Engineering, the property gains the needed additional frontage on two sides—by fronting a private property on the south side and “turning a corner” at the northern side to front a public right-of-way.

Responding to a question from ZBA member Luke Tashjian, Pyda said that he did not have the property surveyed until after purchasing it.

Tashjian said it wasn’t clear to him whether the property met the requirement for 100 feet of frontage and suggested that the zoning board might need an outside legal opinion to settle the matter.

Chairman Carroll Yanicelli said she felt the variance application was “a lot to ask.”

“And with the neighbors opposed, I feel like the board has trouble granting variances when there is so much neighbor interest and with so many neighbors against,” Yanicelli said.

The applicant said he would be willing to consider a smaller structure if it meant gaining support from the neighbors to create a two-family home.

ZBA member John Mahoney said he would advise the applicant to not spend any money on additional studies at this point, such as for traffic, because with so many neighbors so uncomfortable with the application, it would not be a wise expenditure. He added that he did not “see a real hardship here that runs with the land.”

Pyda when asked how he defined the hardship read from the application itself: “The hardship justifying the requested variance is that the passing of the regulation increasing the lot width. But for the 1975 change in the B Residence lot width regulation requirement in 1975 the property would have been allowed to submit an application for a two-family Special Permit.”

Each unit in the proposed two-family dwelling will have 2,400 square feet. Stevens noted that the property owner could build a 3,400-square-foot single-family home as-of-right while adding a 1,000-square-foot accessory structure.

Tashjian said he wanted the ZBA to continue the matter in hopes that the applicant could “reach an equilibrium with their neighbors.”

“Because I think it’s tragic, you have a young family move to town,” he said. “This is not a hardship in the sense of a zoning hardship. It’s a hardship in the sense of all of us families having a common sense of values. If we can address everyone’s concerns without making an issue, I think that’s good. I don’t know if that is possible or not. But that is why I would vote to continue it. But I do think that if the decision is made for the variance, I do not think that it’s a fact pattern that we could not grant it.”