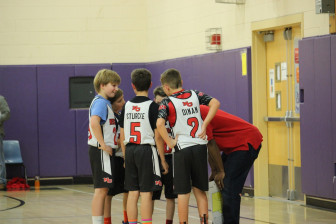 New Canaan had other ideas, as two baskets by Chris McLallen and one by Ryan Connelly pulled New Canaan to within 29-27 with 5.3 seconds left in the game. After a New Canaan timeout, Norwalk was charged with a five-second violation, giving New Canaan head coach Felix Belgrove and the Red 5’s one chance to tie or win the game. 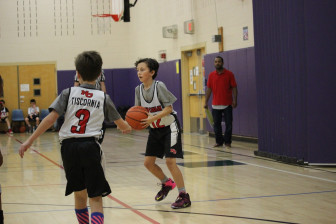 After calling his last timeout, Belgrove drew up the play and New Canaan executed it to perfection, as McLallen—who scored a team-high 10 points in the game—was left open in the corner for a potential game-winning three-pointer, one that seemed to be destined to send New Canaan to its first win of the season from the moment it left McLallen’s fingertips.

Destiny, however, was not on New Canaan’s side on Sunday night. McLallen’s shot rimmed out and Norwalk grabbed the rebound, preserving a dramatic, heart-stopping 29-27 win for TMT. 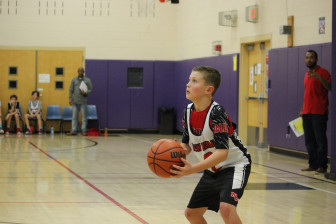 New Canaan started the game cold from the floor, missing its first five shots and falling behind 3-0 early in the first quarter. A turnaround jumper from Travis Sturcke got the Red 5’s on the board, and a put-back layup from Ryan Tonghini pulled New Canaan to within 1 point at the close of the 1st. Excellent play on both ends of the floor from point guards Connor O’Donnell (2 points, 3 rebounds, 3 assists) and Connelly (2 points, 1 rebound, 3 assists, 2 steals) kept New Canaan within striking distance of TMT throughout the opening stanza. 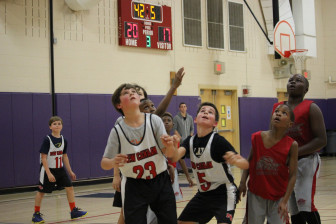 Despite baskets from Tonghini and O’Donnell, TMT opened things up in the second, building a 13-7 lead at the midway point. Solid defensive play from Jerome Roscoe (3 rebounds, 1 steal) and Colin Tiscornia (3 rebounds, 1 assist) helped New Canaan eventually turn the momentum, as McLallen would hit two baskets and a free throw to cut the Norwalk lead to 13-12 with 1:38 left in the second quarter. TMT hit the last two shots of the quarter to take a 17-12 lead into the half. 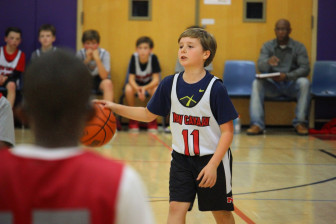 New Canaan’s defense flexed its muscles after the intermission, as itszone defense gave Norwalk fits, holding them to a single point in the third. Matt Salmini (2 points, 5 rebounds, 3 blocks) and Tonghini (2 points, team-high 8 rebounds) and Bear Morris (4 rebounds, steal) controlled the glass for New Canaan as the Red 5’s on an 8-0 run to take the lead. Baskets on consecutive possessions by Sturcke (6 points, 5 rebounds), Cooper Dinan (2 points, 4 rebounds) and Salmini gave New Canaan its first lead of the game, 18-17, with 3:20 left in the third. Another Sturcke hoop extended New Canaan’s lead to 20-17, until TMT was finally able to stop the bleeding with a lone free throw to end the third quarter scoring, and pull to within 20-18.

An 11-1 TMT run would give Norwalk a 29-21, setting up New Canaan’s comeback that ultimately fell inches short of completion. 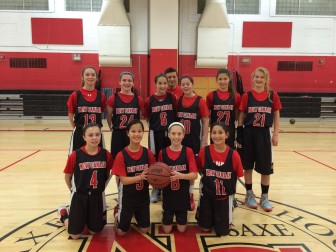 Wilton made a comeback at the start of the second period, but their lead was short lived.  Marlee Smith sunk a 3 pointer that ended Wilton’s run.  Smith would score again from a nice pass from McKiernan underneath which tied the game.  Smith would score another 3 point shot and the New Canaan team took charge of the game.   Steals from Julia Bazata and Smith as well as blocked shots and rebounds from Olivia West, St. George and Sophia Karimnejad shut down the Wilton offense.  A last minute blocked shot by Gibbons would give New Canaan a 2 point lead at the half (18-16)

New Canaan’s offense didn’t disappoint in the 3rd quarter.  Reidy scored on a nice outside shot from a Murphy dish, St. George pulled down an offensive rebound and put it back up for a basket, Gibbens made a strong drive for two and Smith scored on a layup.  Great defense from McKiernan and Reidy  and relentless pressure from Smith prevented Wilton from getting back into the game.

In the 4th quarter, New Canaan continued to play strong.  Bazata started off the scoring with an outside shot from a Smith pass.  Smith then drove to the hoop for another two points.  St. George went in for a strong layup, scored and was fouled and came up with an and 1.  Rebounding from McKiernan, West, Smith and Gibbens would hold the Wilton offense to only 2 points in the quarter.  New Canaan finished with an impressive 35-22 win.