Saying a pair of chillers located alongside Town Hall fail to comply with an original site plan for the newly renovated and expanded structure, a commercial property owner adjacent to the public building is challenging its Certificate of Occupancy. 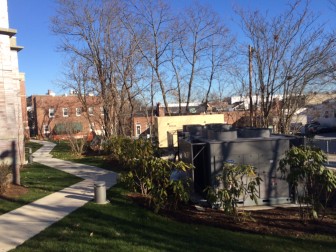 The chillers out back of Town Hall. Credit: Michael Dinan

The Planning & Zoning official who issued the CO “exceeded his authority” and “acted impermissibly” in two ways, according to an appeal filed at Town Hall by attorney Stuart Johnson on behalf of Terry Spring, town resident and managing partner of Cody Real Estate LLC—which owns the commercial buildings on Main from the former Varnum’s Pharmacy building across to the Baskin-Robbins space, including the parking lot behind them.

“As constructed, the expanded Town Hall fails to comply with its approved site plan because no noise barrier exists surrounding the chiller units and standby generator on the south side of the building as depicted on the approved site plan,” according to a Statement of Reasons for Appeal.

It continues: “As constructed, the expanded Town Hall fails to comply with the special permit issued to the Town of New Canaan because the chiller units and standby generator are placed on the ground at the south side of the Town Hall building, contrary to the plans presented to the Planning & Zoning Commission when the special permit application was granted March 26, 2013.”

The dispute between Spring and the town around the chillers goes back more than one year. She originally had objected to the issuance of a variance to New Canaan’s noise ordinance for the chillers, saying they would be prohibitively loud is she were to develop her commercial properties to include second-floor residential units.

Town officials at the time said Spring’s real complaint is with the placement of the chillers in an area that used to serve as an access road between the parking lots out back of Town Hall and her own buildings. Under the new configuration, town officials have said, motorists entering the lot behind People’s Bank and Garelick & Herbs must exit to Main Street, too, negatively impacting traffic flow for the private commercial lot. They also note that in a rendering at a July 23, 2013 public hearing before the Planning and Zoning Commission, the chillers are located where they now sit (watch that hearing here starting at 1:04:35 and the rendering in question shows up at 1:17:07).

Johnson said that at the special permit application stage, “the mechanical equipment was supposed to be on the roof.”

“So the Planning and Zoning Commission never got the opportunity to evaluate it when a special permit ought to be granted, when the chillers were on the ground next to a neighbor’s property, as opposed to being on the roof,” he said.

The matter arose during the Dec. 1 Board of Selectmen meeting, when Selectman Beth Jones noted that the area around the chillers looks “unfinished” next to the “gorgeous building” [Town Hall].

First Selectman Rob Mallozzi at that meeting responded that the Cody Real Estate legal team had advised New Canaan not to screen the equipment with 28 arborvitae trees that had been purchased for that purpose.

“We are working on a proposal that should make everyone happy,” Mallozzi said at the meeting.

Johnson confirmed that there’s a plan to use the trees to screen the chillers and generator “but if there is also going to be a barrier there for purposes of mitigating the noise, we thought it would be important to make sure that those details are tied up before the planting is done.”

The appeal to the CO for Town Hall has appeared on the last two agendas for the Zoning Board of Appeals meetings, but has not been heard. It’s expected to be on the group’s Jan. 4 agenda.