The town last week issued a building permit for a new, 5,528-square-foot home on a 3-acre Ferris Hill Road lot, nearly tripling the size of the log cabin-style house that had stood there since 1931.

The new home at 59 Ferris Hill Road will include six bedrooms, five bathrooms, two half-baths, a finished basement and three-car garage, according to the permit.

It will cost about $1,250,000 to build and the contractor on the job is SJ Home LLC of Seymour, the permit said. 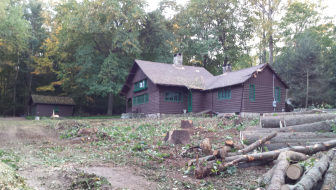 Its new owners in October were issued a permit from the Inland Wetlands Department in order to pursue the building project. The proposed work is regulated under Inland Wetlands, in part, because more than one half-acre of land will be disturbed upgrade of wetlands and a watercourse (in this case, the pond) that is more than 5,000 square feet (see Section 7.4 of the regulations here).

The former home—demolished in October—had 1,949 square feet of living space. 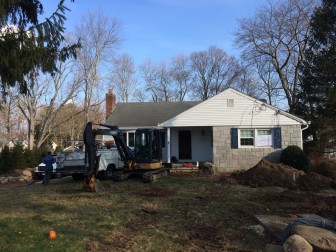 The town last week also issued a permit to demolish a 1955-built ranch on a .41-acre lot on South Avenue.

Demolition crews could be seen outside the home on Friday.

It isn’t clear what’s planned for the lot—no building permit application has been filed yet with the town.