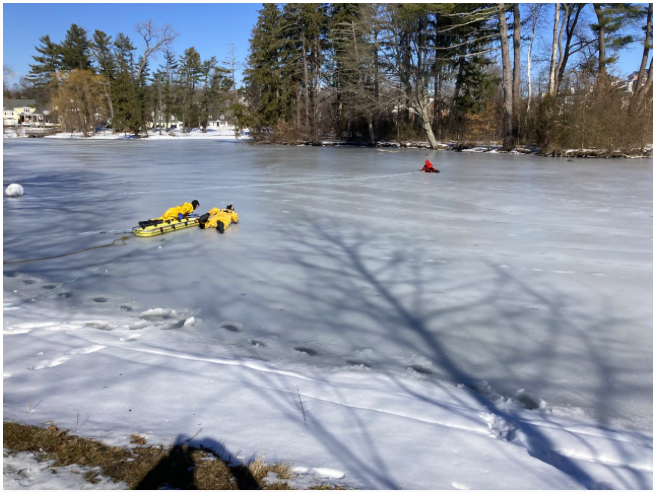 New Canaan firefighters on Saturday practiced water rescues at Mead Park, rehearsing drills that save the lives of people, pets and wildlife. 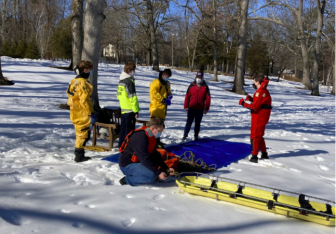 Firefighters execute water rescues from one to five times per year, according to Russ Kimes III, assistant chief of the New Canaan Fire Company No. 1.

“We ended up getting called out just after doing that drill,” he added. “A homeowner went out onto the water—he had retrieved his dog before we got there. These are not uncommon calls for us during the winter. Sometimes some will walk out onto the ice before it’s fully formed. It’s a reality—kids, pets, wildlife. We get deer sometimes out on the reservoir.” 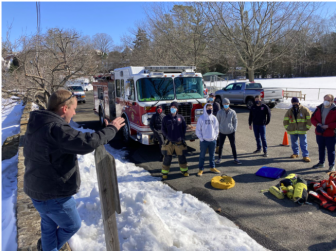 Kimes, a U.S. Marines veteran and EMT as well as New Canaan’s emergency management director, referred to a call that came in at about 3:30 p.m. Saturday at Jelliff Mill Road and Spring Water Lane.

“We are trying always to partner between the organizations, to train together, and it was really wonderful to have Emergency Medical Services there, as well as a paramedic from Norwalk who is an EMT instructor.”

The New Canaan Fire Department’s mantra in the rescues is “reach, throw, go,” Kimes said, and drills include the wearing and use of flotation devices as well as ropes and knots to save victims during a water emergency.

According to Kimes, firefighters use the same grade wetsuits year-round to ensure their body temperate remains sufficiently high in the water.

During live water rescues, firefighters first interview witnesses and go to the spot where they saw the distressed person or animal, then use a triangulation method to determine approximately where the individual or animal went under, he said. While trained firefighters get into wetsuits, others attempt to reach victims with pipe poles, ladders, throw ropes with bags and throw rings “so there’s a progression, with increasing risk for us,” he said. The rescuers also use ice picks to help them stay low and move quickly and more safely across the ice, he said.

Asked what residents should know about water emergencies is “do not go out on the ice,” Kimes said.

People often go out onto frozen water bodies such as ponds without knowing the thickness and quality of the ice itself. Rescues often are complicated because people take it on themselves to try to go out on the ice after a pet or wildlife, and end up in the water, he said.

“They should call us,” Kimes said. “We have the appropriate equipment and training. I hate to say it, but a lot of times, by the time we get there the person is stuck in the water and their dog is waiting on shore. That’s what ends up happening.”